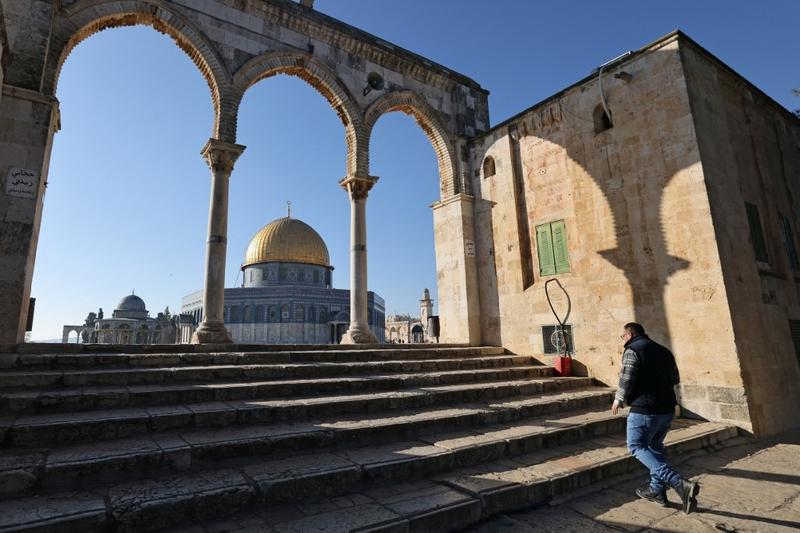 A Palestinian man walks toward the Dome of the Rock mosque in the Al-Aqsa mosque compound in Jerusalem's Old City on Jan 18, 2023. (PHOTO / AFP)

AMMAN – Israeli Prime Minister Benjamin Netanyahu made a surprise trip to Jordan on Tuesday for talks with King Abdullah, who the royal court said underlined the need for Israel to respect the status quo of the Al-Aqsa mosque in Jerusalem.

The compound is Islam's third-holiest site after Mecca and Medina, and Judaism's most sacred site.

Abdullah told Netanyahu, who took office last month and whose visit to Jordan marks his first foreign trip since he came back to power, that Israel should respect the "historic and legal status quo in the Holy Aqsa mosque and not violate it," the royal court said.

The monarch, who has had years of tense ties with Netanyahu during his past tenure as premier, was quoted as telling the Israeli leader that an end to violence was crucial to allow long-stalled peace talks to resume between the Palestinians and Israel.

Jerusalem is a particularly sensitive issue for Jordan's Hashemite royal family as it is the custodian of Muslim and Christian holy sites in the eastern part of the city.

Netanyahu's return to power has deepened Jordan's concerns that ultra-right policies, which include accelerated Jewish settlement building in Palestinian territories in the West Bank, will spark a new cycle of violence.

The kingdom fears provocative moves by ultra-right Jewish groups that perform prayers in the compound of Al-Aqsa which Muslims consider part of the mosque. There are concerns that the prayer area could inflame religious passions. 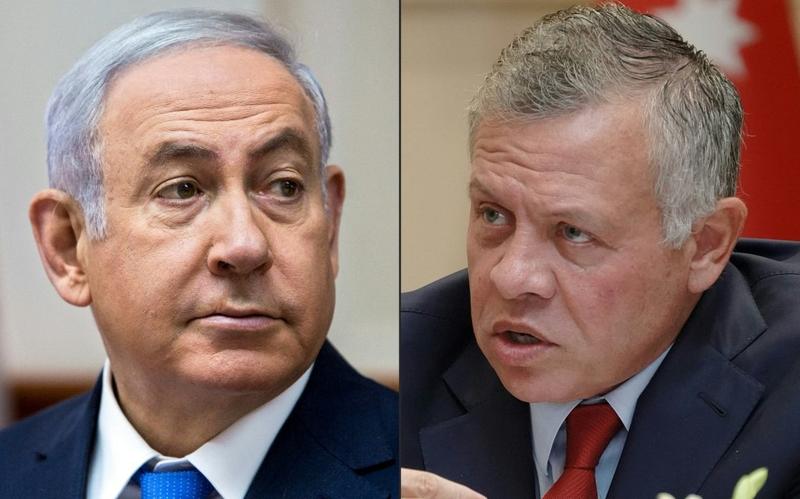 This file combo photo created on Oct 21, 2018 shows Israeli Prime Minister Benjamin Netanyahu (left) attending a cabinet meeting at his office in Jerusalem on July 29, 2018; and a handout picture released by the Jordanian Royal Palace on Oct 21, 2018 showing Jordanian King Abdullah II speaking during a meeting with local political figures in the capital Amman. Jordan's King Abdullah II on Jan 24, 2023 hosted Israeli Prime Minister Benjamin Netnayahu in Amman in a rare meeting as relations between the two leaders have been strained for years. The royal palace said they discussed the situation in Jerusalem's Al-Aqsa Mosque compound and "the importance of respecting the historical and legal status quo". (PHOTO / AFP)

Jewish religious nationalists have increasingly toured the site and demanded rights for Jews to pray in the mosque compound in moves Jordan says undermine an arrangement in which Jews and non-Muslims are permitted to visit but not to pray. That arrangement has prevailed for years.

Jordan is a staunch ally of Washington and is home to many people of Palestinian descent. It is hopeful that the administration of US President Joe Biden will pressure Israel to preserve the status quo in the Al-Aqsa mosque, whose upkeep is paid for by Jordan.

Officials told Reuters that King Abdullah is expected to visit Washington at the end of January. He will hold talks with senior US officials and possibly meet Biden and address the issue of Jerusalem and ways to push the stalled Middle East peace process.

US Secretary of State Antony Blinken spoke to his Jordanian counterpart, Ayman Safadi, shortly after the Ben-Gvir visit. Blinken underscored the importance of preserving the historic status quo at the site, according to a statement by the State Department.