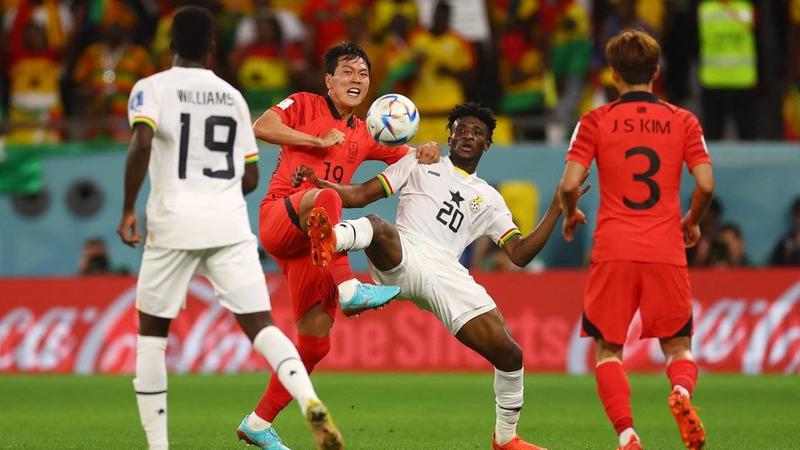 AL RAYYAN — Mohammed Kudus netted twice as Ghana edged out South Korea 3-2 in a dramatic and fluctuating World Cup Group H game on Monday to stay in contention for the next round.

Ghana led 2-0 at halftime but allowed South Korea back into the match as Cho Gue-sung netted twice in three minutes to level at 2-2, only for Kudus to earn Ghana victory in a heart-stopping contest.

Ghana, who lost their opening group game 3-2 to Portugal, moved on to three points in the group, with the Koreans on one after two games.

READ MORE: Ronaldo breaks record as Portugal up and running with Ghana win

Ghana saw off early Korean pressure to go 2-0 ahead as centre back Mohammed Salisu’s scrambled goal in the 24th minute was followed 10 minutes later by a glancing header from Mohamed Kudus.

Both were at the end of superb deliveries from Jordan Ayew, restored to the starting line-up as Ghana fielded a much more offensive line-up than against Portugal.

Ayew’s perfectly-weighted free kick caused confusion in the Korean defence and Salisu turned sharply to snap up the opener as the ball bobbled around. There was a lengthy wait for VAR to check the validity of the goal before English referee Anthony Taylor confirmed it.

Ayew again provided a wicked delivery, with the right height and pace, for Kudus to apply a glancing touch with his head and double the Black Stars’ lead.

READ MORE: South Korea sweat on Son ahead of opener with wildcards Uruguay

Early second-half changes breathed new life into Korea’s attack and Lee kang-in had barely been on the field for a minute when he helped dispossess Tariq Lamptey and fired in a cross that Cho attacked with pace, leaving Salisu watching as he got in front of his marker to power home a 58th-minute header.