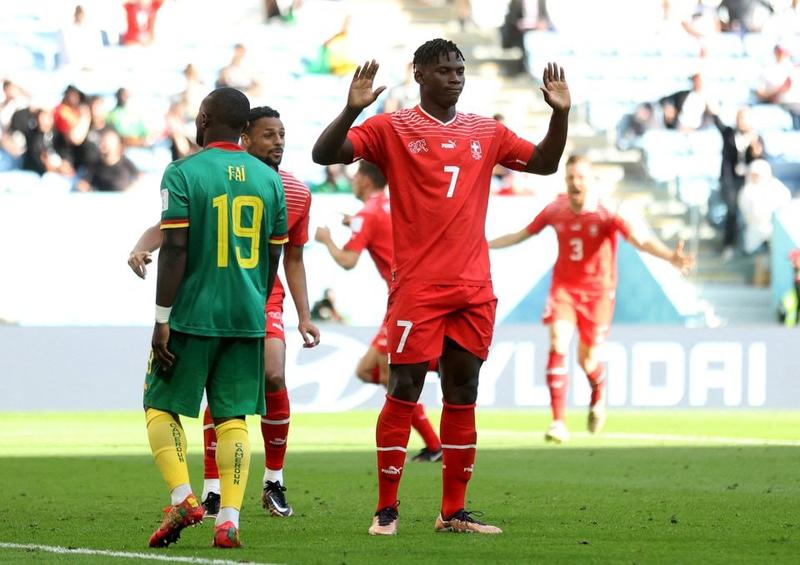 AL WAKRAH, Qatar- Switzerland edged Cameroon 1-0 courtesy of a goal against the run of play by apologetic Breel Embolo versus the country of his birth for an opening win in World Cup Group G at the Al Janoub Stadium on Thursday.

While it was a good day for the Swiss it was a bad one for African football, whose teams in Qatar have yet to score a goal in the tournament.

Apart from Cameroon, Tunisia as well as Morocco and Senegal all failed to find the net in their opening matches. Ghana are in action later on Thursday against Portugal.

Embolo, born in Yaounde but raised in Basel, struck three minutes after the restart from a Xherdan Shaqiri cut-back to put them top of the section.

The 25-year-old refused to celebrate the goal on his 60th international appearance, lifting his hands in the air and frowning as the small group of Swiss fans cheered wildly at Al Janoub Stadium

The 25-year-old refused to celebrate the goal on his 60th international appearance, lifting his hands in the air and frowning as the small group of Swiss fans cheered wildly at Al Janoub Stadium.

ALSO READ: Four things to look out for on World Cup Day 5

"We know his story. I told him before the game 'Breel, friendship until the start, then they are your opponents," Switzerland coach Murat Yakin said.

"Football write such stories but he completed his mission. I am very happy with his performance."

Serbia play Brazil in the other group match later on Thursday.

The Swiss goal came after Cameroon had dominated the first half, missing several good chances to take the lead.

The Indomitable Lions, who eliminated Algeria in a playoff to qualify for the tournament, had outplayed the Swiss in the first 45 minutes with quick combinations, speed and power as their opponents remained toothless up front.

They carved out their first chance after 10 minutes with Bryan Mbeumo testing goalkeeper Yann Sommer before Karl Toko Ekambi sent his rebound over the bar.

The Swiss were in trouble again a little later with in-form forward Eric Maxim Choupo-Moting snatching the ball from an opponent to charge into the box only for Sommer to block his effort.

In search of their first win at a World Cup in 20 years, Cameroon were bolder, taking on their opponents in one-on-one situations, while the Swiss rarely managed to get into the African side's box.

Switzerland, who reached the last 16 in the two previous World Cups, struck at the start of the second half with veteran Shaqiri cutting into the area and Embolo tapping in what proved to be the winner.

An almost identical move just past the hour almost saw the Swiss score again but Ruben Vargas's shot was pushed wide by keeper Andre Onana to keep his team in the game.

Cameron failed to replicate their first half performance, failing to seriously threaten Sommer, and were lucky not to concede another in stoppage time through Haris Seferovic.

"The next match is decisive for us. We have to create opportunities. But we remain with our heads held high and know that anything is possible," Cameroon coach Rigobert Song said.

"In football when you dominate, you have to finish. It is true that we had more opportunities but we didn't complete them. That's what made the difference. The goal just did not come."

The Swiss next play Brazil on Monday with Cameroon taking on Serbia.