Jiuzhaigou in Sichuan province is seeking to balance ecological preservation inside the park and tourism around it, Xu Lin reports. 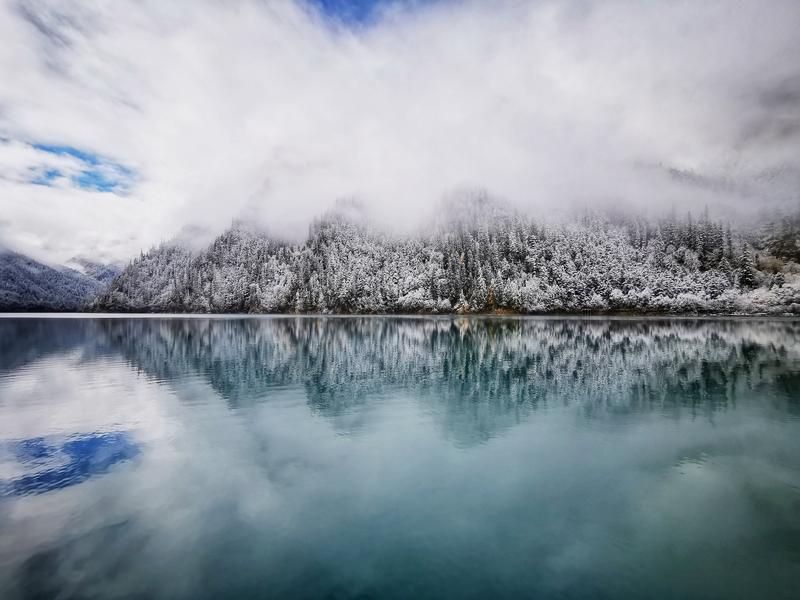 Between late May and early June annually, Luo Pingzhao visited the picturesque Jiuzhaigou National Park in Sichuan province to study bird-life with his binoculars. That is the best time to watch both migratory and resident birds there. The region has 27 species of birds under the country's first-and second-class protection programs.

Records show that it is probably the only place in China to watch the endangered migratory bird rufous-headed robin, known for its signature singing and quick movement.

Luo once observed the Sichuan wood owl, which is endemic to China, after spending three nights in Jiuzhaigou's forests.

"I held my breath when I heard the hooting, from far and near. When I turned around, I was so excited to see that the owl was there," recalls Luo, 36, from Chengdu, provincial capital of Sichuan. "Bird-watchers should consider animal welfare first when observing. You shouldn't disturb the birds too much in the wild."

Like him, many avid bird-watchers take Jiuzhaigou, literally meaning "nine-village valley", in the Aba Tibetan and Qiang autonomous prefecture in Sichuan, as a must-visit destination to observe endemic species of birds in China.

In 1992, Jiuzhaigou Valley Scenic and Historic Interest Area was added to the UNESCO World Heritage List because it met the criterion of "containing superlative natural phenomena or areas of exceptional natural beauty and aesthetic importance".

The national park has scenic and aesthetic appeal, with a landscape of clear lakes, waterfalls and karst formations, as well as jagged alpine peaks.

Tourism has become the pillar industry in the area, benefiting local Tibetan villagers while attracting large numbers of visitors annually.

"The development of the region is based on protection (of the park). Our principle is issue-oriented — to adjust protective measures timely to solve problems," says Du Jie, deputy head of the Jiuzhaigou Scenic Area Administration.

In 2001, the administration regulated that tourists had to stay overnight outside the scenic area, closing homestays and restaurants.

In the meantime, it implemented policies to increase incomes of locals, such as offering them job opportunities in the scenic area. While the administration is the majority shareholder, with 51 percent stake in the company that manages the scenic area, local villagers can become shareholders of the remaining 49 percent stake. They can collectively receive an annual dividend of 77 percent of the profit if they have stakes in the company.

The "most common uncivilized tourist behavior" in Jiuzhaigou is to trek to unopened peaks, enter the water or feed fish, according to Du. To promote civilized tourism, activities on ecology protection are regularly organized at the scenic area, and tour guides always explain the do's and don'ts to visitors. 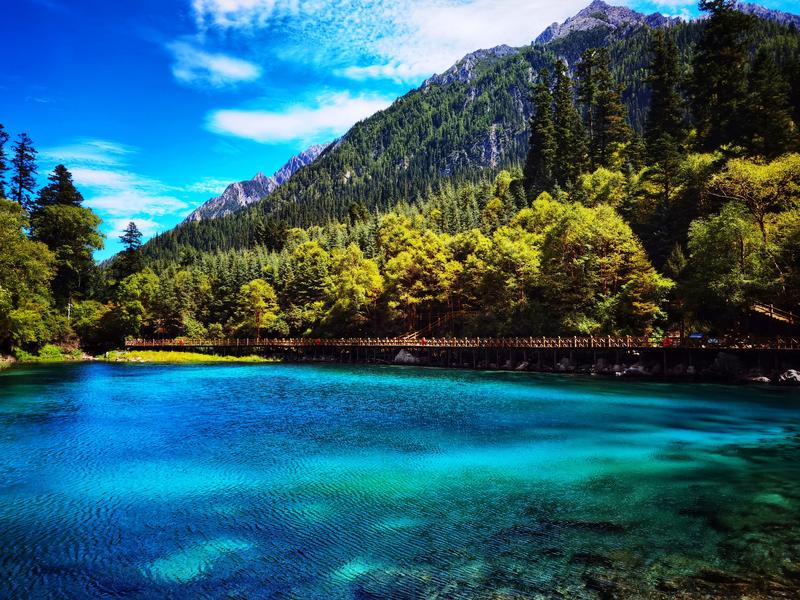 On Aug 8, 2017, a magnitude 7 earthquake hit the area, leaving the landscape of Jiuzhaigou with scars caused by landslides, falling rocks and debris flows. The park was closed to the public for about two years, and when reopened, some 85 percent of the space was accessible to tourists. Last year, it fully reopened to visitors after a recovery of its fragile beauty.

"To the human eye, the unique scenery of Jiuzhaigou has been almost restored to its former glory — about the same as before the earthquake," Du says.

Three months after the earthquake, the administration issued a detailed plan to restore the landscape, wildlife habitat and vegetation cover, with the goal that the recovery should rely mainly on nature's self-healing ability, supplemented by necessary manual intervention.

"It is a big challenge for us to explore the recovery mode, and we try to enhance the value of Jiuzhaigou during the process," he says.

He says the park needs to comply with UNESCO conventions on protecting the site to retain its outstanding universal value, as well as Chinese laws and regulations on ecological management.

"We undertake proper manual intervention if a potential danger threatens the safety of human beings or affects the park's integrity," he says. 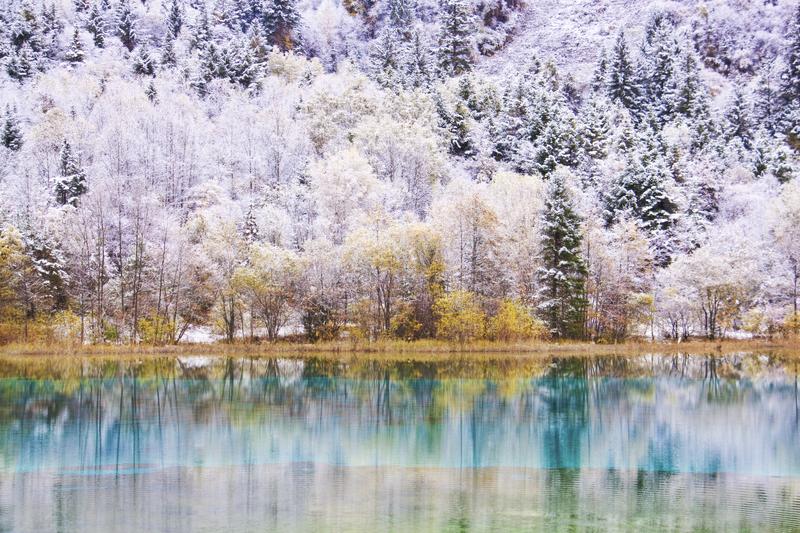 The embankments of the Sparkling Lake collapsed after the earthquake, forming a 40-meter-long, 12-meter-wide and 15-meter-deep gap around it. There are 24 waterfalls and lakes around the site.

"The waterfalls and lakes looked like a necklace, and with one 'bead' missing, the whole necklace may be broken. The Sparkling Lake may have a chain reaction to cause the collapse of other lakes, posing great danger to the people and wildlife in the lower reaches," he says.

They spent over a year doing research and came up with a plan to restore the ecosystem with eco-friendly materials, with approval from UNESCO.

Tang Ya, a professor at the College of Architecture and Environment, Sichuan University, says: "If you have a fractured bone, the doctor will fix it with a splint to let it recover gradually. Jiuzhaigou's recovery should also have intervention by humans only when needed."

Tang and his team have done in-depth research on the sustainable development of Jiuzhaigou since 2006. He says he's lucky to have connected to Jiuzhaigou in 1991, when he was in charge of translating into English the application documents for the UNESCO listing.

Nuorilang Waterfall, one of the widest waterfalls in China, collapsed after the 2017 earthquake. A 19.4-meter-long crack was formed, and Tang says if the crack was left there, erosion would grow bigger, threatening the safety of the nearby lakes and waterfalls. 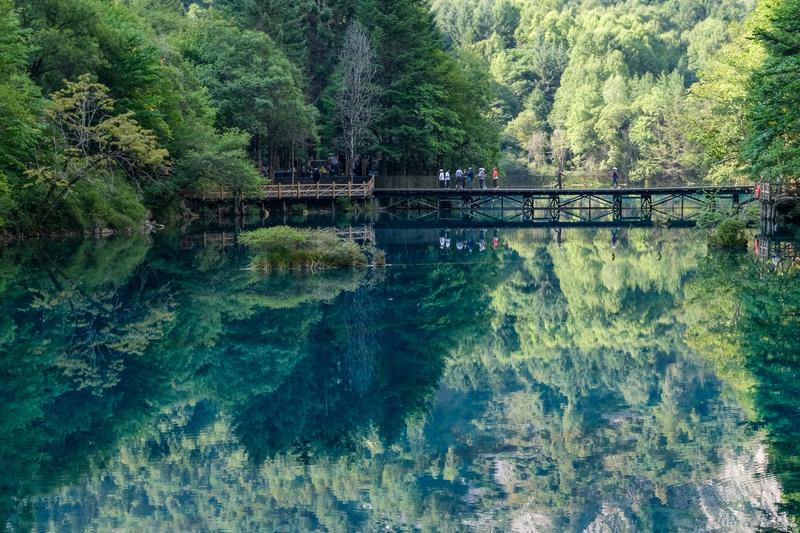 The unusual landscape of Jiuzhaigou is formed by massive tufa (porous rocks) deposits, and the administration filled in the crack with tufa, successfully restoring the scenery of Nuorilang.

The number of geological hazard sites in the park increased from 78 to 182 after the quake, and 170 of which have been fixed via ecological engineering, such as building concrete retaining walls and protective nets.

Du says the vegetation ecosystem was badly damaged in the earthquake, affecting the integrity of the landscape. As it would take long for nature to restore vegetation, the administration implemented a project to beautify the newly built retaining walls by giving the slopes some greenery.

To prepare against natural disasters, it also established a system to monitor geological hazards, built shelters and constructed architecture, thought to be resistant to up to magnitude 8 quakes.

Du says as a natural world heritage site, Jiuzhaigou shares some problems faced by its counterparts elsewhere, with influences from climate change and extreme weather, and tourist activities. That means it's essential to enhance the sustainability of Jiuzhaigou via adaptive management based on a scientific approach.

"It means that we adjust our protective measures in accordance with long-term monitoring and analysis of data, including the tufa deposits, in Jiuzhaigou," he says. 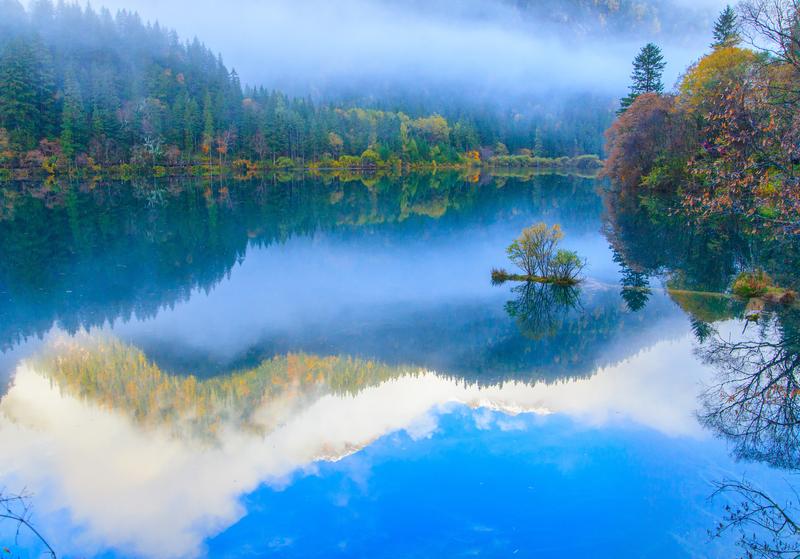 "It's like going to see a traditional Chinese medicine practitioner — the doctor will adjust the prescription based on changes in your body after you take the medicine," Tang says.

To protect Jiuzhaigou's unique tufa landscape, he says it's important to know about the factors affecting degradation. His team is also doing research on how to slow the tendency of swampiness in Jiuzhaigou's lakes.

"The post-disaster reconstruction of Jiuzhaigou is successful, solving some previous problems as well. Ecological engineering has made the environment consistent with the landscape," Tang says.

He emphasizes that authorities should minimize the influence of tourist activities on the landscape. As carbon dioxide is related to tufa degradation, he suggests that electric shuttle buses should be used in the scenic area, and the administration has already taken some action.

He says local authorities and residents are aware that it's important to balance tourism and ecological protection for sustainable development.

"Once hidden in the deep forests, Jiuzhaigou is like the secret workings of nature. Many people have dedicated themselves to preserving the area, and we want our descendants to enjoy its stunning beauty," Tang says.

Huang Zhiling contributed to the story.