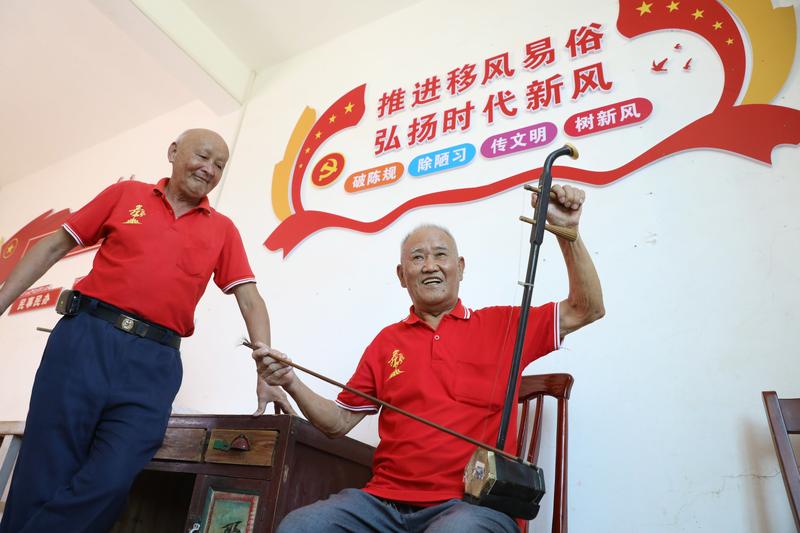 A senior plays the erhu with a friend at an activity center in Gukeng in August. (ZHU XINGXIN / CHINA DAILY)

In a small village in East China's Jiangxi province, a library has replaced the ancestral hall as the new activity center.

The library is located in the center of Gukeng village in Xunwu, a county that is home to about 1,500 people. The residents are welcome to stop by to chat, grab a book to read, watch movies or play musical instruments.

Li Xianfu, a 45-year-old fruit farmer, often drops by for about 30 minutes to chat with other villagers or read books on modern farming technology.

The junior high school graduate said he is determined that his children, ages 17 and 12, will not follow in his footsteps.

"Doing physical work forever doesn't work out. Reading and going to school are important," he said.

Seven years ago, Li returned to his hometown from Shantou, a city in Guangdong province where he worked installing aluminum doors and windows. He said he quit the high-paid job simply so he could be with his children and supervise their studies.

Gukeng's villagers have always been supportive of a good study atmosphere. In 2010, they built the two-story library with about 10,000 yuan they earned from renting out collectively owned forest land. All the books were donated by the local government and a number of wealthy villagers. 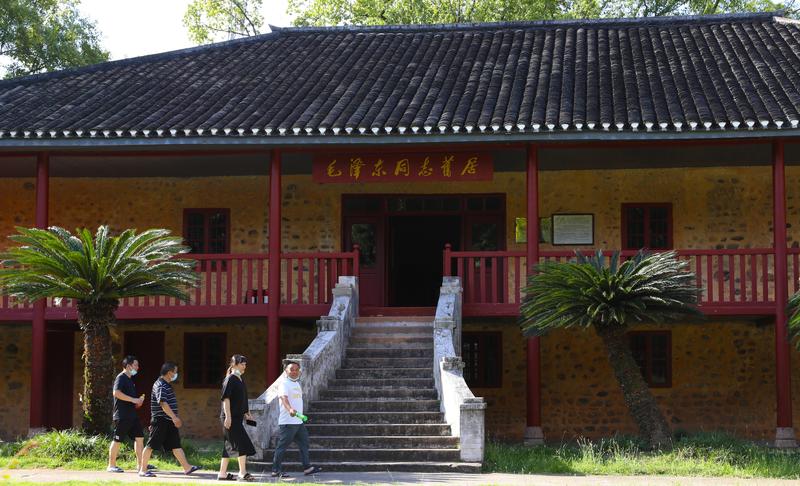 The library also acts as an e-commerce service station, and e-commerce operators who built a logistics network have free use of one room.

So far, they have helped the villagers sell products worth more than 10 million yuan ($1.4 million) online every year.

About 20 kilometers away, in Xunwu's Liuche village, a library equipped with a movie theater was opened in August last year, attracting many local children.

Chen Jingwen, 15, said she can sit and read in the library for at least an hour every time she visits.

"It is convenient and comfortable. I can find books that suit my tastes here and read them without being disturbed. It's a quieter environment than my home," she said.

Recently, she borrowed To Live by modern writer Yu Hua because most of her classmates recommended it.

"It made me experience the feelings of joys and sorrows across an entire life and inspired me to write articles about people's lives," she said. 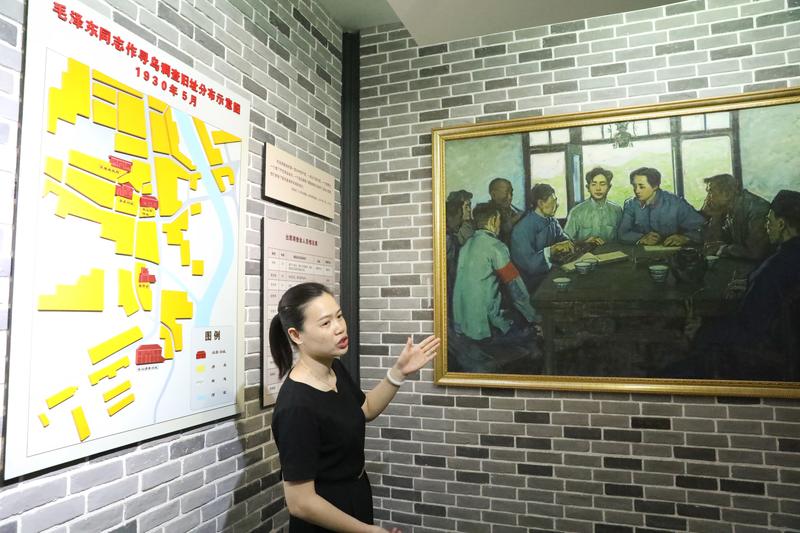 A tour guide discusses an exhibition in the memorial hall for Mao's book Report from Xunwu in August. (ZHU XINGXIN / CHINA DAILY)

Her recent favorite book is Elijah of Buxton by Christopher Paul Curtis, an award-winning author from the United States. It is the story of a boy who is timid and cowardly but grows to be brave after going through many experiences, she said.

"I was impressed with his experience of saving a girl. Overcoming problems in incidents like that made him strong. The story helps me to become braver when confronting the things that scare me. I have also learned that people should avoid doing things that they may regret," she said.

She said that she wants to attend university in Beijing when she is older.

"The capital city must have larger libraries that contain more books. Everyone who wants to read can find their own place," she said.

Jingwen usually gets good exam results, and the village committee honored her mother as one of the best parent educators after she encouraged her daughter to read. 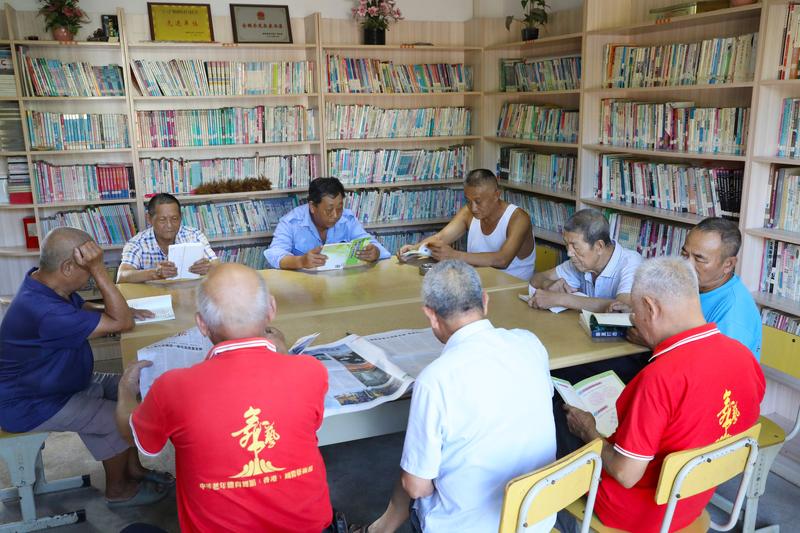 The village is just about four hours' drive from Shenzhen, Guangdong province. Many couples have moved to the city to find work in factories, which meant leaving their children at home.

Of the 400 minors in the village, 18 are "left-behind children", who need great guidance and care.

Kuang Yun'e, a village official who often spends long hours at the library looking after the left-behind children when they play with their friends there, said that as the youngsters are raised by their grandparents, they regard the seniors as their "real parents".

"Every time they video chat with their parents, they don't want to say too much because they are not on close terms with them, and they always hang up first," she said.

"Each migrant worker can earn 6,000 yuan a month at electronics factories (in Shenzhen), but those who stay around the village undertaking small-scale business can only make about half that sum.

"As a way of helping the children's education and mental health, we have been persuading those parents to not 'go out'. We told them that staying with the children is more important than making money," Kuang said.

However, some couples who have opened their own factories in Guangdong and are hoping to make a fortune will not listen, and they prefer to wait for a chance to move their children to the city, she said.

"If a child does not receive a good initial education from their parents, those parents will have a hard time dealing with them when they grow up," Kuang said.

In 2020, the local government built a chicken farm that added about 400 jobs in the village. The eggs produced there are sold in Guangdong. Meanwhile, Kuang said that the development of local industry has persuaded many of those who left to find work to stay at home. As a result, this year, the number of left-behind children has fallen to 18 from 32 in 2018.