By Yang Feiyue in Beijing and Liu Kun in Wuhan

Valuable contributions made to medical research 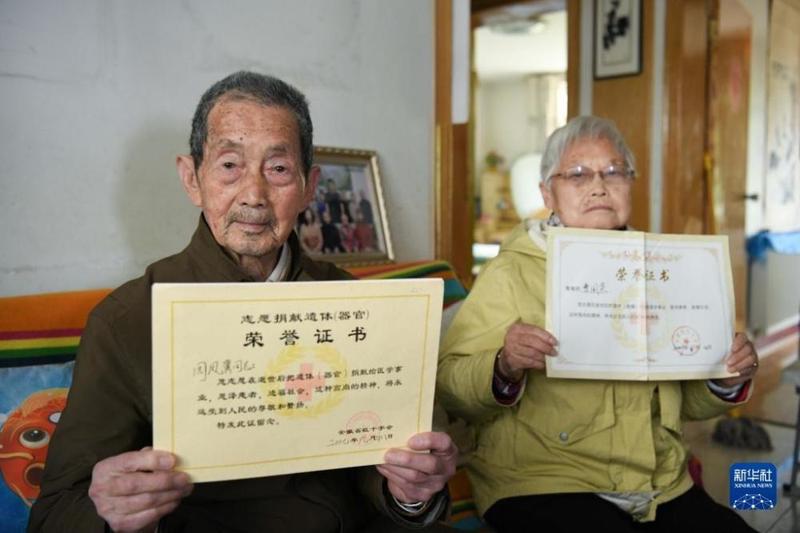 Johannes Emanuel Monfils was not visiting the institution to attend a lecture or to see a doctor. He was there to sign a body donation agreement.

Monfils, who is in good health for his age, was planning ahead, as he wants to contribute to medical research at the university after his death.

"Most people choose cremation or burial after death, but why not donate your body to medical students for research?" he said.

"There are still many diseases for which there is no good treatment, and many medical problems can be solved by studying human remains."

The silver-haired Monfils, who smiled frequently as he completed the donation agreement, said, "It was not a big deal — I just needed to fill in the form and sign my name."

As a chemical engineer in the Netherlands, Monfils was assigned by his company to work in many areas of China, including Hong Kong, Shanghai and Nanjing, capital of Jiangsu province. He met his future wife, who comes from Shiyan, when she was working in Shanghai. The couple married in 2005.

Speaking about the years he has spent in China, Monfils said: "Chinese people are very nice to me. I love China, its culture and the food."

After retiring in 2012, Monfils traveled to Shiyan to join his wife, who wanted their daughter to start school in the city. "Shiyan is a very beautiful city. I like everything here," he said.

Monfils, who has long embraced the idea of organ donations, has lived a simple and self-disciplined life. He likes to read and enjoys soccer and table tennis.

"Every year in my home country of the Netherlands, millions of people decide to donate their organs and bodies, which can save many lives," he said. 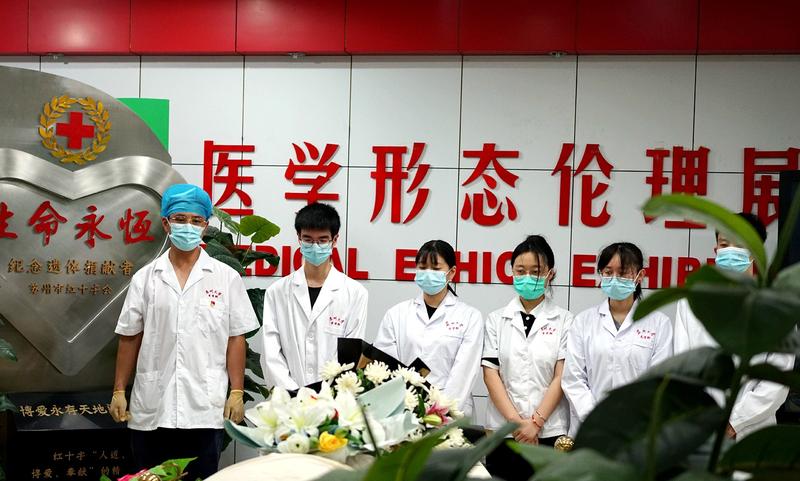 Students at Suzhou University in Jiangsu province pay their respects on Aug 23 to Yang Hongping, who volunteered to donate his body to the institution's medical school. (PHOTO PROVIDED TO CHINA DAILY)

He decided to donate his body for medical research after reading news reports of such contributions.

"I figured I should do a little something for China. My wife is very understanding and supports my decision," Monfils said.

He is the first foreign resident in Shiyan to donate his body for medical research, according to Li Yong, deputy director of the morphology laboratory at Hubei University of Medicine.

The local authorities printed an English-language copy of the donation agreement for Monfils. The agreement was provided by the Red Cross Society of China's Shiyan branch.

Li said, "When he filled out the donation form, he wrote very carefully, and his handwriting was nearly as neat as printing."

However, due to traditional customs, many people have doubts about donating their remains, while numerous medical schools are short of resources for medical research.

Hubei University of Medicine has set up a volunteer service team to publicize organ donations, and also offers related services for those who intend to sign such agreements.

Li said that since it was established, the team has staged more than 50 public events to promote the need for organ donation, reaching a total audience of more than 50,000 people.

There has been a shift in the public's perception of organ donations in Shiyan, with the number of applications for body donations received by Hubei University of Medicine rising in the past two years. 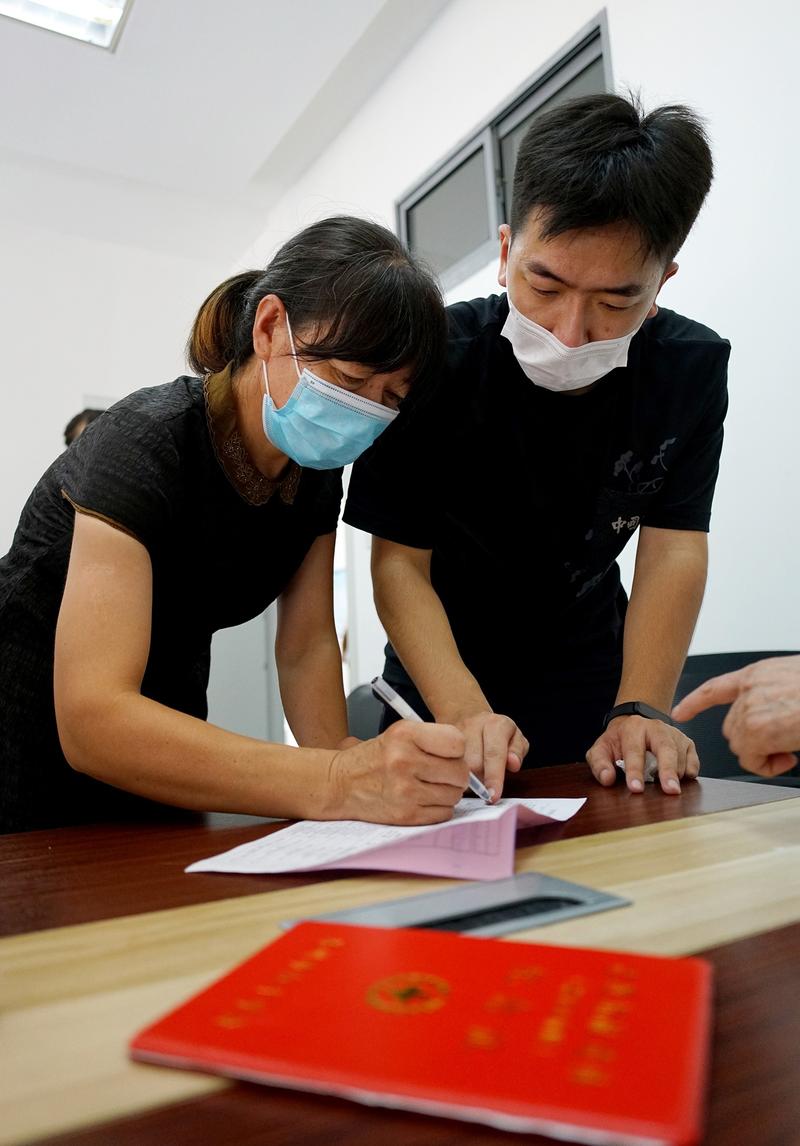 Yang Hao, the son of Yang Hongping, and a relative sign the agreement to donate the body of Yang's father for medical research. (PHOTO PROVIDED TO CHINA DAILY)

Li said that last year, a record 54 people applied to donate, while this year, more than 30 applicants have signed such agreements.

The efforts made by China to promote organ donations, which grabbed Monfils' attention, have also resulted in more Chinese breaking from tradition to become registered organ donors.

As of September, more than 5 million people had registered to be donors, according to the China Organ Donation Administrative Center, compared with 1.2 million in March 2019.

Huang Jiefu, a senior member of the China National Organ Donation and Transplantation Committee, said the number of people who have made posthumous donations, and the number of organ transplants in China, are both the second-highest in the world.

Guo Yanhong, an official at the National Health Commission's Bureau of Medical Administration, said that from 2010 to May 2020, more than 43,000 people donated their organs after death, contributing to transplants involving some 116,000 organs.

In addition to the rising number of organ donations and transplants, the level of medical supervision for transplants has continuously improved over the years, Guo said, adding that the post-operative survival rate globally has reached an advanced level.

China started to pilot its organ donation program in 2010, and five years later, it made voluntary donations the only legitimate source of organs for transplants.

According to the latest report on the nation's organ transplant development by the China Organ Transplantation Development Foundation, the number of posthumous organ donations reached more than 29,000 from 2015 to 2020. 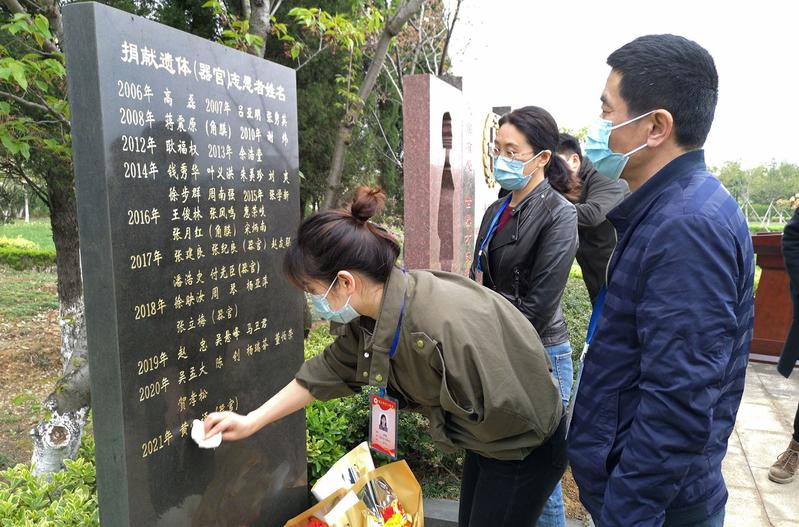 A memorial ceremony for organ donors is held in Wuxi, Jiangsu, on March 31. (DING HUANXIN / FOR CHINA DAILY)

Some 180 hospitals were certified to perform organ transplants in 2020, when more than 5,200 posthumous organ donations were made and over 17,000 organ transplants were performed, according to the foundation's report.

In 2020, the provinces of Guangdong, Shandong and Hunan, as well as Beijing and Guangxi Zhuang autonomous region headed the organ donations list.

More leading experts and scholars are signing up to donate their organs — attracting widespread public attention and encouraging the public to follow suit.

Zhang Dingyu, a doctor who has amyotrophic lateral sclerosis, or ALS, recently decided to donate his body for ALS research. Also known as Lou Gehrig's disease, after the baseball player who was diagnosed with it, ALS is a progressive nervous system disease that affects nerve cells in the brain and spinal cord, causing loss of muscle control.

Zhang, 59, was diagnosed with ALS in 2018, but this didn't stop him helping at Wuhan Jinyintan Hospital in Hubei province, one of the major battlefields as COVID-19 struck the city in early 2020.Zhang treated and saved more than 2,800 patients with COVID-19 in Wuhan, many of whom were severely or critically ill.

In September 2020, he became one of the recipients of the national honorary title "People's Hero "for his outstanding contributions to the nation's fight against COVID-19.

Zhang didn't tell his family in advance about his donation decision, which he considers to be "a very simple idea".

"I am an ALS patient, and donating my body will help medical workers carry out research into this disease," he said.

Zhang said he was initially scared when he was diagnosed with ALS, but he has come to terms with it. "Man is born to die... and because I can't change this fact, I have to face it honestly. As I can't prolong time or the length of life, why not play my part in making life a little fuller?" he said.

Netizen Jin Ming said Zhang's love knows no bounds, adding, "He has enabled me to learn that donating your body is a different extension of life, and is very meaningful." 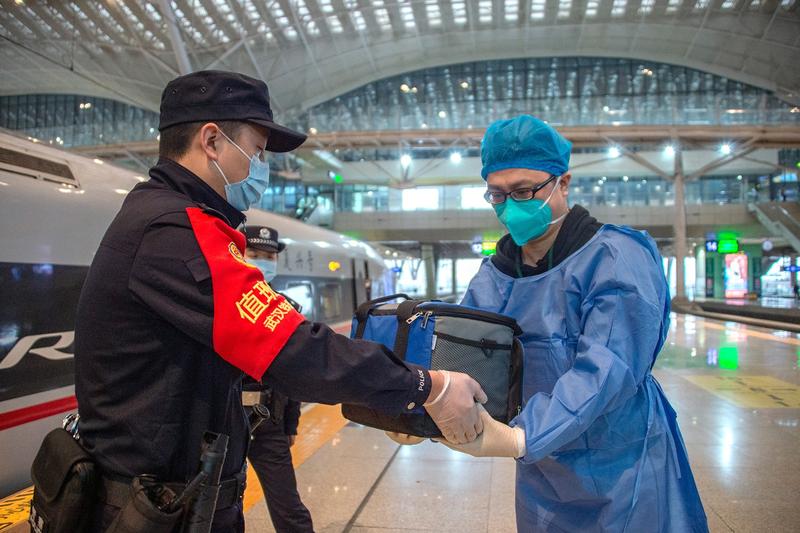 A medical worker from Tongji Hospital in Wuhan, Hubei province, takes over responsibility for a donated kidney from a railway crew member as the organ arrives from Shijiazhuang, Hebei province, in November last year. (WU ZHIZUN / XINHUA)

In April 2019, Xia Suisheng, a professor at Tongji Hospital and an organ transplant pioneer in China, had his wish fulfilled when his corneas were transplanted to two patients, who subsequently regained their sight.

Li Guigang, chief ophthalmologist at Tongji Hospital affiliated with Tongji Medical College at Huazhong University of Science and Technology in Wuhan, said: "Xia's leadership has encouraged more people to donate, which will improve the shortage of organ transplant donors nationwide. We are especially moved by and proud of Professor Xia."

Chen Zhishui, head of the hospital's organ transplant research institute, said there is still a big shortfall in organ supply, as there are now more patients who require such donations.

While kidney diseases are frequently reported among the population, late-stage renal patients can be treated through dialysis, extending life for a long time, Chen said. As a result, demand for transplants continues to mount.

At Tongji Hospital, more than 1,000 patients await kidney transplants every year, but due to a shortage of donors, only a few hundred such operations are performed.

Chen believes it is important to help the public understand the significance of organ donations.

"Relevant departments should provide better support for the healthy development of organ donation, and people from all walks of life should join in creating an atmosphere for the whole of society to promote these donations," Chen added.

Several conditions must be met before an organ can be donated.

The donor's life must be considered to be beyond saving, the consent of all immediate family members has to be obtained, and a rigorous medical evaluation conducted to confirm that the organs can be used, Chen said.

"They are greatly significant for the development of medicine and social progress," Yao said.

"It is important that medical students are grateful to organ donors and respect the value of life. They should also cherish and love life, as well as the opportunity to study, so that they can commit themselves to extending life."

Huang, from the China National Organ Donation and Transplantation Committee, called for more efforts to promote public awareness of voluntary organ donations to meet China's transplant needs, while cracking down on the trade in organs.

Revision of the nation's organ transplant regulations, which were released in 2007, should be speeded up to enable a complete legal discourse on voluntary organ donation, Huang added.