By Xu Wei in Bali, Indonesia 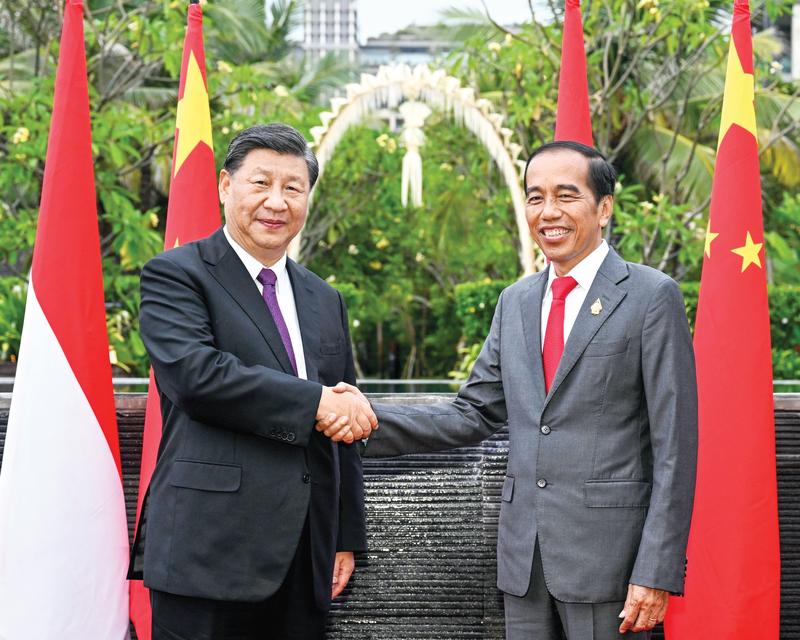 President Xi Jinping shakes hands with Indonesian President Joko Widodo during their meeting on the sidelines of the G20 summit in Nusa Dua, Bali, Indonesia, on Nov 16. (LI XUEREN / XINHUA)

President Xi Jinping and Indonesian President Joko Widodo pledged to foster a new pattern of high-level cooperation, as both leaders reached key consensuses on the building of a bilateral community with a shared future during a meeting on Nov 16.

The meeting between Xi and Widodo on the sidelines of the G20 Summit in Bali was their second sit-down within four months. The Indonesian leader made his fifth trip to China in July, becoming the first foreign head of state to visit Beijing since the Beijing Winter Olympic Games.

Before the meeting, the two leaders witnessed via video link the trial run of the Jakarta-Bandung High-Speed Railway, a landmark project of the Belt and Road Initiative that is expected to start operations in June and create 30,000 jobs for local people.

Beijing stands ready to continue furthering the alignment of the BRI with Indonesia’s Global Maritime Fulcrum strategy and enabling the completion and operations at an early date of the Jakarta-Bandung High-Speed Railway, the first high-speed railway in Southeast Asia, Xi said.

Both sides should continue to move forward with the development of the Regional Comprehensive Economic Corridor and the “Two Countries, Twin Parks” project to bring bilateral cooperation to a new level, Xi said.

The cooperation between the two nations has yielded tangible achievements that not only have benefited the two peoples but also have had a positive influence at the regional and global levels.

Xi vowed continued support to Indonesia in developing a regional production center for vaccines as well as related joint research and development.

China will welcome the imports of more quality products from Indonesia and will encourage more Chinese businesses to take part in the building of major infrastructure projects in the nation, including the country’s new capital and the green industrial park in the province of North Kalimantan, Xi said.

The two sides should expand cooperation on the digital economy and green development, he added.

The president also called on the two nations, both major developing countries and emerging markets, to uphold true multilateralism and focus on key areas including poverty alleviation, food security and development financing to build landmark projects of the Global Development Initiative.

Both sides should contribute to stronger, green and healthy global development and promote global governance that is more just and equitable, Xi said.

He expressed support for Indonesia’s holding of the rotating chairmanship of the Association of Southeast Asian Nations next year, saying that the two countries should focus on development and cooperation, promote the building of a peaceful, safe and secure, prosperous, beautiful and amicable home, and forge an even closer China-ASEAN community with a shared future.

Widodo began the talks by calling Xi “my big brother” and again congratulated Xi on his reelection as general secretary of the Communist Party of China Central Committee.

Indonesia appreciates the bilateral cooperation on the research, development and production of COVID-19 vaccines, and stands ready to step up cooperation in healthcare, he said.

Widodo expressed hope that the two nations can deepen strategic and pragmatic cooperation and jointly build a bilateral community with a shared future, adding that Indonesia stands ready to proactively promote friendship and cooperation between ASEAN and China.

Witnessed by Xi and Widodo, the two sides signed cooperation documents including an action plan to bolster the bilateral comprehensive strategic partnership (2022-26) as well as plans on Belt and Road cooperation, industrial vocational training, the digital economy and expansion of bilateral economic and trade cooperation.