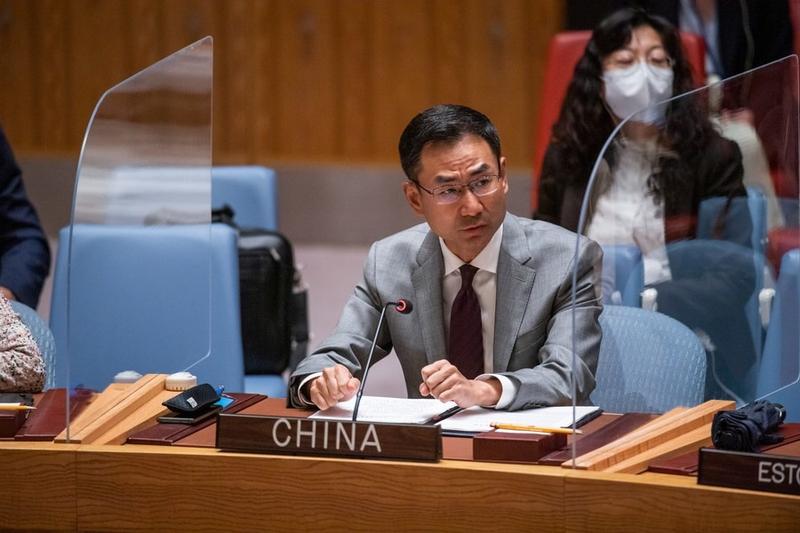 UNITED NATIONS – China's deputy permanent representative to the United Nations on Wednesday called for sticking to dialogue and engagement for a political settlement of the Ukraine crisis.

"China is deeply worried about the recent intensification of ground conflicts, and saddened by the civilian casualties and damage to civilian facilities thus caused," Geng Shuang said addressing the UN General Assembly Emergency Special Session on Ukraine.
What is urgent now is to guide the parties concerned to exercise restraint, avoid escalation of conflicts, prevent the confrontation from getting out of control, and deescalate the situation, he said, noting that "in the final analysis, the Ukraine crisis has to be resolved peacefully."
However daunting the difficulties and challenges are, the door to political settlement shall not be closed, diplomatic negotiations shall not be stalled, and efforts to stop hostilities and promote peace talks shall not be slackened, he said.

"The international community must encourage the parties concerned to relaunch peace talks as soon as possible, incorporate reasonable concerns into negotiations, put feasible options on the table, and create conditions and space for the cessation of hostilities and settlement of the crisis," Geng said.
Wednesday's Emergency Special Session adopted a draft resolution on Ukraine, which China voted in abstention.
Geng stressed that the General Assembly, as the most representative organ of the United Nations, should play an active and constructive role on the issue of Ukraine by bridging differences and forming consensus, garnering the greatest synergy for peace talks and finding the greatest common factor among member states.
"We have always believed that any action taken by the General Assembly should be conducive to the deescalation of the situation, be conducive to the early resumption of dialogue, and be conducive to the promotion of a political solution to this crisis," he said.
The envoy voiced concerns about the deteriorating humanitarian situation in Ukraine, warning that the coming long winter "will further aggravate the difficulties."
China calls on the international community to increase humanitarian assistance to Ukraine and its neighboring countries to ensure proper resettlement of the people affected by the conflict, he said.

The international community, the UN in particular, should keep development high on the international agenda, diffuse the spillover effects of the crisis in Ukraine, and help developing countries overcome difficulties, he said.
The crisis in Ukraine shows once again that clinging to the Cold War mentality and bloc politics, creating bloc confrontation, and pursuing absolute security will not bring peace, but will only lead to conflicts, which serves no one's interests, the envoy pointed out.
At a time when the world needs unity and cooperation to overcome difficulties, it is irresponsible and dangerous to focus on ideological differences, intimidate and force other countries to take sides, create isolation and exert pressure, and engage in decoupling and chain-cutting, he said.
"We must draw lessons from history, reject division and confrontation, uphold solidarity and cooperation, practice multilateralism, and jointly safeguard the international system with the UN at its core and the international order based on international law, with a view to promoting world peace and development," Geng said.

As a responsible country, China will always stand on the side of peace, the envoy said. "We will work with the international community, and play a constructive role in de-escalating the situation and seeking a political solution to the crisis."