Six reasons why Pelosi's visit to Taiwan is a mistake

BEIJING - Speaker of the US House of Representatives Nancy Pelosi recently made a provocative visit to China's Taiwan region in disregard of China's strong opposition and serious representations. The visit is a serious violation of the one-China principle and the provisions of the three China-US joint communiqués. It has a severe impact on the political foundation of China-US relations, seriously infringes on China's sovereignty and territorial integrity, and gravely undermines peace and stability across the Taiwan Straits.

By visiting Taiwan, Nancy Pelosi has made six mistakes: reneging on past commitments, trampling the rule of law, undermining peace, meddling in China's internal affairs, political manipulation and abusing power for selfish purposes

By visiting Taiwan, Pelosi has made six mistakes: reneging on past commitments, trampling the rule of law, undermining peace, meddling in China's internal affairs, political manipulation and abusing power for selfish purposes. The visit is bound to face the judgement and punishment of history.

Reneging on past commitments 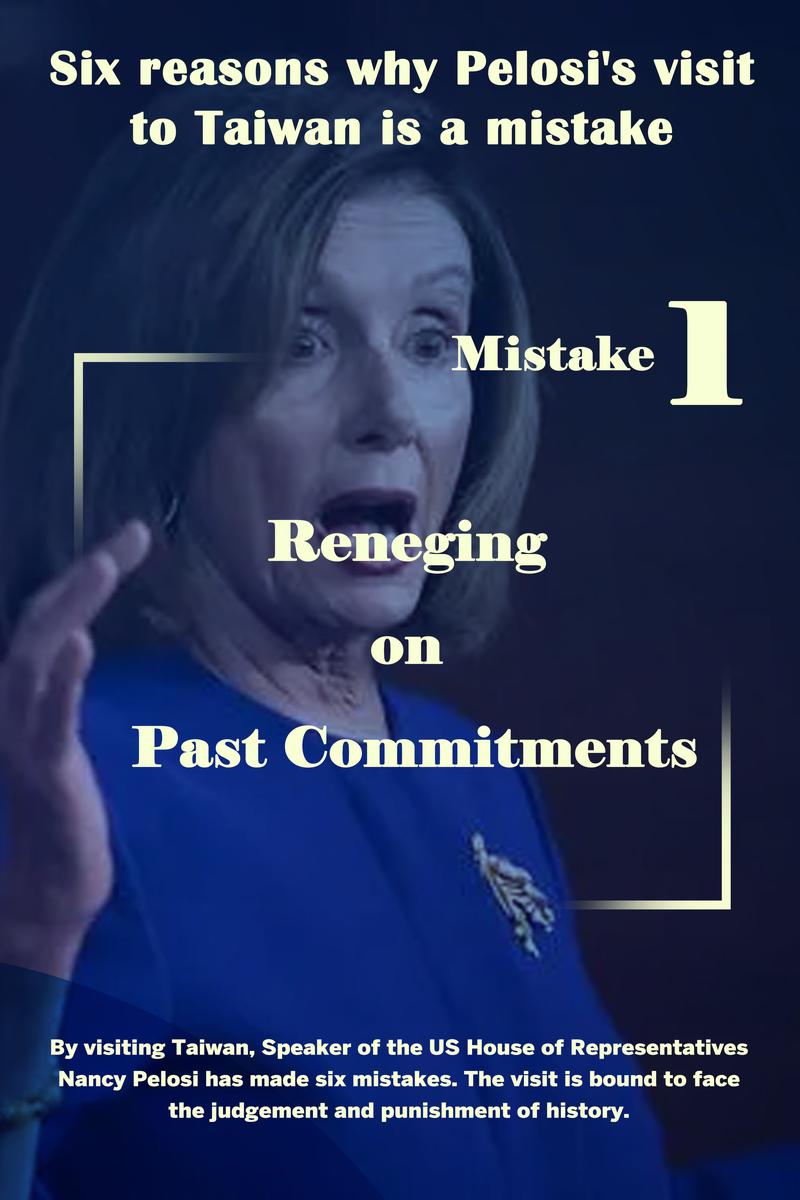 In recent years, the US, with its double-dealing, has kept fudging and hollowing out the one-China principle and challenging China's red line with salami tactics. The US Congress keeps making toxic rhetoric on Taiwan and proposed and adopted many negative bills regarding Taiwan. These have seriously undermined the political foundation of China-US relations.

Since the Biden administration took office, rather than undo the serious mistakes of the previous administration, it has gone further in ganging up with US allies to play the "Taiwan card", spreading the idea that "the status of Taiwan is undetermined", and attempting to make the Taiwan question an international issue, thus sending a very wrong signal to "Taiwan independence" separatist forces.

There can be only one foreign policy of the US as a country. The House of Representatives of the US Congress, as part of the US Government, is obliged to strictly follow the one-China policy of the US Government and not engage in any official interactions with China's Taiwan region. Pelosi is the third-highest ranking political figure in the US and second in line following the Vice-President to succeed the President. Her visit to Taiwan, in whatever form and under whatever pretext, carries high political sensitivity, and marks a major political provocation upgrading the official interactions between the US and Taiwan, and a breach of the political commitment of the US.

Trampling the rule of law 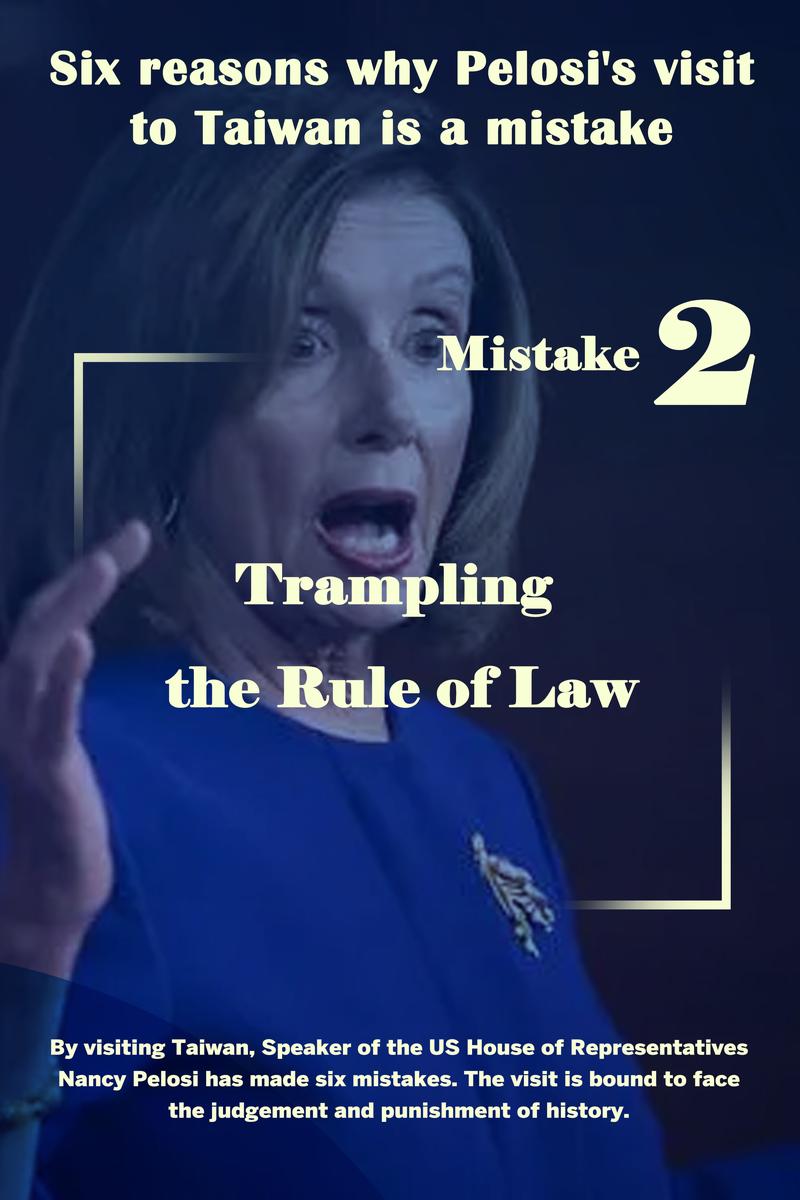 Nancy Pelosi's visit to Taiwan is a serious violation of the one-China principle. This principle is the prevailing consensus of the international community and a widely-accepted basic norm in international relations

Pelosi's visit to Taiwan is a serious violation of the one-China principle. This principle is the prevailing consensus of the international community and a widely-accepted basic norm in international relations. 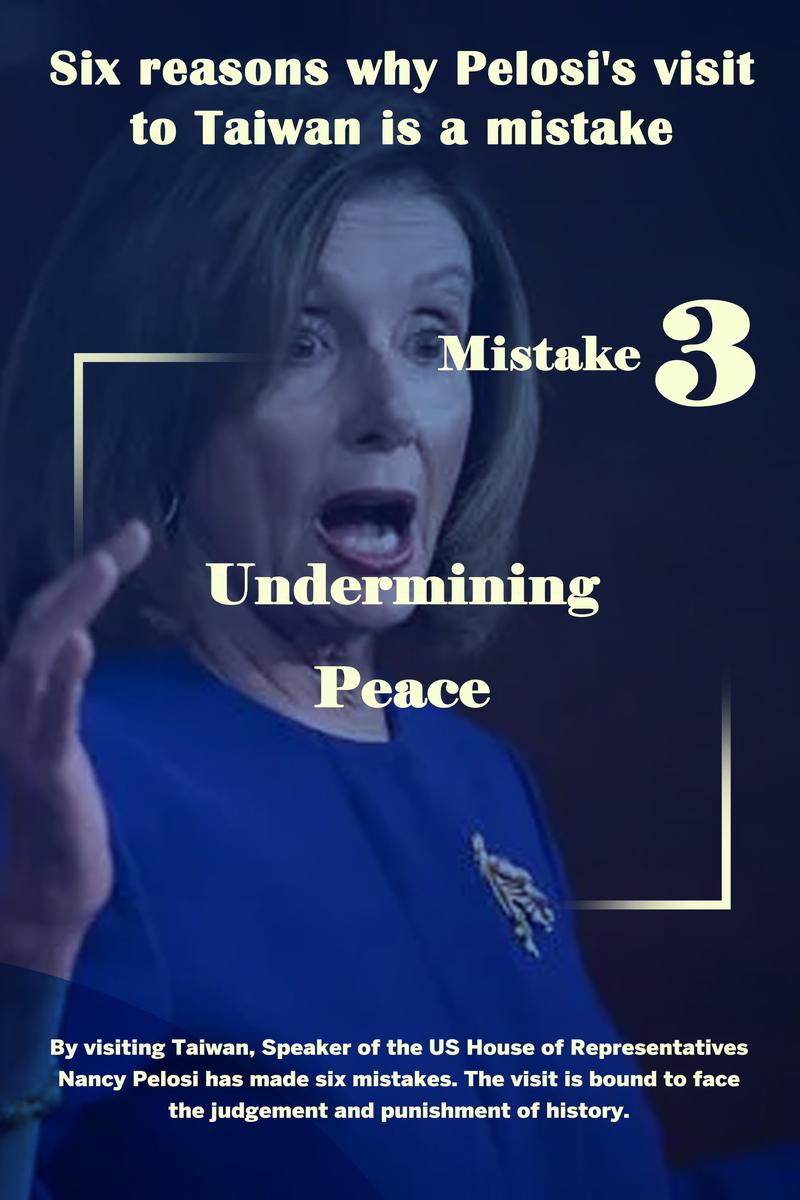 The root cause to the current tensions across the Taiwan Strait is that the Taiwan authorities have kept seeking US support for their independence agenda, while some in the US intend to use Taiwan to contain China. Pelosi's visit to Taiwan is the latest example of the US conniving at and supporting "Taiwan independence" separatist forces. It gravely undermines peace across the Taiwan Straits and regional stability. The US should and must bear all responsibilities for that.

Over the past few days, many countries have issued official statements condemning Pelosi's visit to Taiwan, which leads to escalation of situation in the Taiwan Straits, and constitutes a deliberate political and military provocation as well as a malicious act that undermines peace and security in the region. They have expressed firm support for China to take all necessary measures in defence of its sovereignty, security and development interests. Pelosi's provocative visit to Taiwan is also opposed and criticized by many sensible people in the US.

Many publicly stated that Pelosi's grandstanding visit was extremely dangerous and irresponsible. A poll conducted inside the Taiwan island shows that nearly two thirds of the respondents believe this visit has undermined peace and stability across the Taiwan Straits.

Whoever acts against the overwhelming historical trend of peace and development will become a huge disgrace in history. 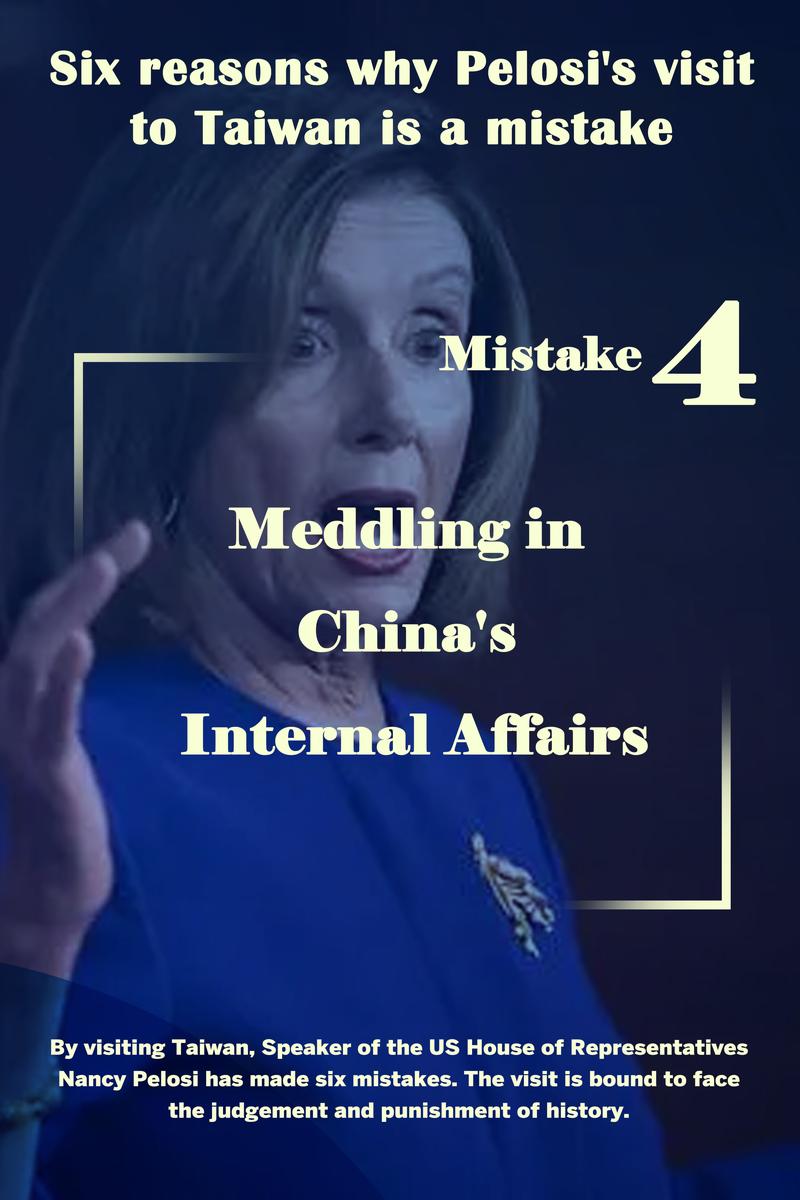 Over the years, Pelosi has been using the anti-China card and China hate for political gains, and grossly interfered in China's internal affairs. In 1991, Pelosi disturbed public order by grandstanding in the name of supporting so-called "democracy" during her visit to China. In 2008, she went out of her way to stir up trouble on Tibet, and urged President George W. Bush to boycott the Beijing Summer Olympics. In 2019, she met in DC with anti-China, destabilizing forces from Hong Kong, and described the violent demonstrations in Hong Kong as "a beautiful sight to behold". In 2019, she met with Rebiya Kadeer, a principal figure of "Xinjiang independence" separatists. In 2021, she played the same old trick by advocating a US "diplomatic boycott" of the Beijing Winter Olympics. On the Taiwan question, Pelosi's influence is surely behind all the so-called "Taiwan-friendly" bills passed by the US Congress in recent years.

Pelosi has turned a blind eye to the myriad domestic challenges in the United States and shown little interest in the welfare of the American people. Instead, she is obsessed with repeating what have been repeatedly proven to be lies of the century. This fully reveals how far she is prepared to go only to pursue her anti-China agenda. She may well choose to make a show in whatever form, but what she does will end up in vain. If anything, it will only go down in history as additional evidence of the US's gross interference in other countries' internal affairs.

Pelosi claimed that "today the world faces a choice between democracy and autocracy" and that "Our congressional delegation's visit to Taiwan honors America's unwavering commitment to supporting Taiwan's vibrant Democracy." Yet in reality, what Pelosi has done is by no means for the sake of defending democracy, but to infringe on China's sovereignty, undermine China's stability and hold back China's development in the name of democracy. It is political manipulation out and out.

Democracy is a common value of humanity. It is an entitlement of people in all countries, not a prerogative of only a handful of countries. Whether a country is democratic or not can only be left to its own people to decide. It should not be subjected to the finger-pointing of some people from outside. Pelosi and some other American politicians, styling themselves as champions of "freedom, democracy and human rights", have defined other countries as a democracy or otherwise simply based on their own liking, and spun the "democracy versus autocracy" narrative in the international community. Their behavior is, in essence, an anachronism of the Cold War mentality and zero-sum mindset. It features the use of ideology and values as a tool to create confrontational blocs and advance a geopolitical agenda, for the purpose of protecting the vested institutional power of the US and other Western countries and defending Western-centrism and White Supremacy centering on Anglo-Saxon culture.

Over the years, the US has used democracy as a label, a political tool and a weapon to advance "democratic transformation" and orchestrate "color revolution", causing disastrous consequences. Since 2001, the wars and military operations that the US waged under the pretext of democracy, in Afghanistan, Iraq, Libya and Syria, have claimed tens of thousands of lives and left millions injured and tens of millions displaced. What Pelosi is doing now is no different. It is just another example of the US's despicable pursuit of hegemony under the guise of democracy, which will be strongly condemned and opposed by the international community. 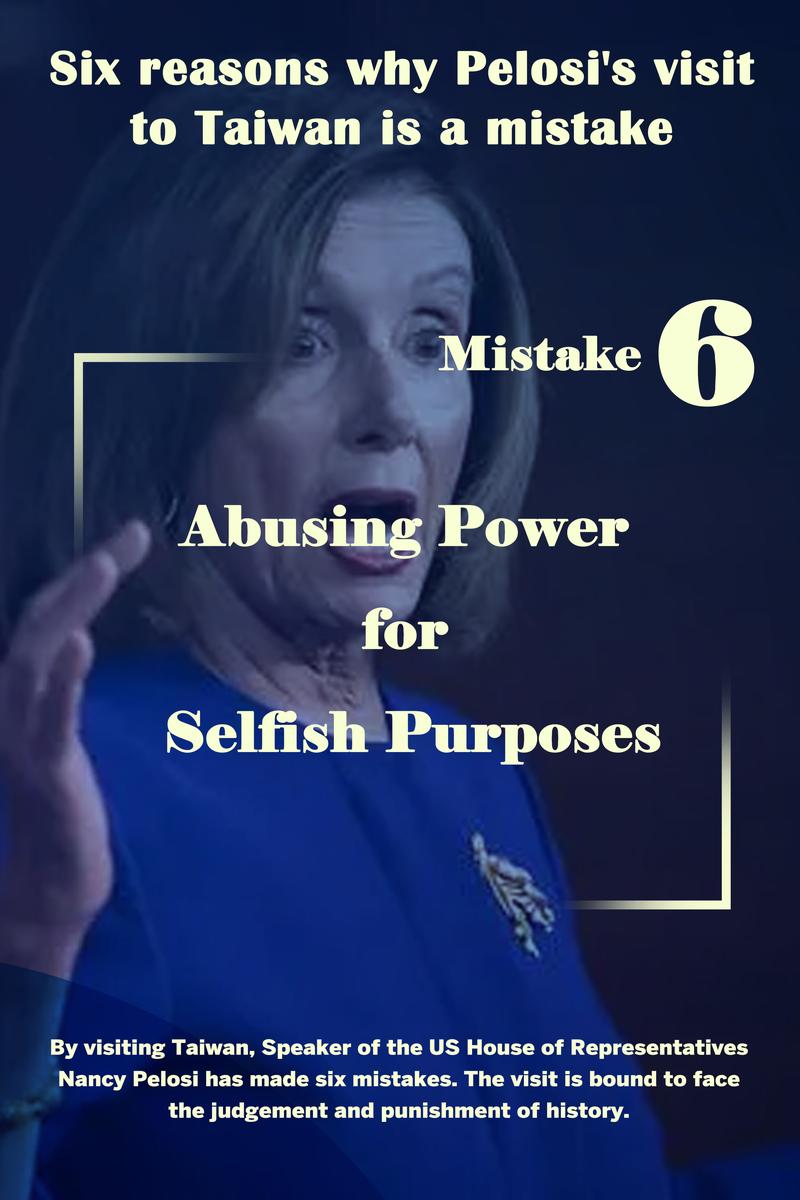 As pointed out by American media, with the upcoming US midterm elections and a declining Democratic Party, Pelosi seeks to win political points by playing the "Taiwan card" and leave behind so-called political legacy. But "Pelosi's achievements in Taiwan are largely personal, symbolic and short-term." The regional security tensions thus caused, as well as other serious consequences, are to bring long-term impacts and inflict profound damage on China-US relations.

US Congresswoman Marjorie Taylor Greene censured Pelosi on Twitter, pointing out that Pelosi's going to Taiwan, putting so much under risk, is only for her husband Paul Pelosi to profit from his recent investment in the chip industry. "Americans have had enough with a woman obsessed with her own power she's held for decades while our ENTIRE COUNTRY CRUMBLES."

Greene's words do not come from nowhere. Recently, Pelosi and her husband have had repeated scandals and come under severe skepticism. Multiple pieces of media coverage in the US have revealed that Paul Pelosi, having become a prominent figure in the US stock market in recent years, is always able to make the right investment decision just ahead of the government's policy roll-out. In 2020, the couple's investment return was as high as 56 percent, compared to the legendary Warren Buffett's 26 percent during the same period. As a result, the Pelosi family's net worth is now over US$100 million. Before she went to Taiwan, when asked at a press conference "has your husband ever made a stock purchase or sale based on information he received from you", Pelosi was quick to deny and rushed to leave.

Pelosi's reckless Taiwan drama is another debacle of US politics, diplomacy and credibility. It is doomed to be despised by the world and swept into the dustbin of history.