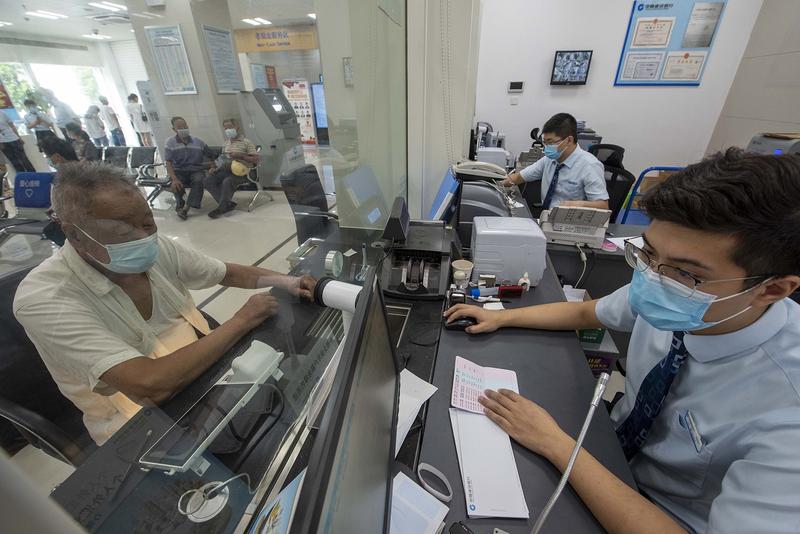 The recent inversion of medium and long-term deposit rates at some of China's largest State-owned commercial banks shows that lenders are seeing a downward trend in deposit rates in the medium to long run. They have taken proactive measures to reduce long-term deposits whose interest rates are higher, industry experts said.

Liang Si, a researcher with the BOC Research Institute, said the inversion of medium and long-term deposit rates has revealed banks' wish to reduce the cost of liabilities.

"Driven by China's central bank policy interest rate cuts, commercial lenders have continuously stepped up support for the real economy in recent years, and lending rates have remained in an overall downward trend. As a result, banks are facing the pressure of narrowing interest margins. Adjusting the debt maturity structure as appropriate and optimizing the management of the cost of debt will increase banks' willingness to issue loans and enhance their capabilities in this regard to better support the development of the real economy," he said.

China's efforts to ensure sufficient liquidity is one of the reasons behind the inversion. Facing downward pressure and the adverse impact of COVID-19, China has enhanced efforts to support the real economy since the beginning of this year. Its overall liquidity environment has remained stable with modest monetary easing and interest rates have shown a downward trend, Liang said.

In the second half of this year, the People's Bank of China, the nation's central bank, may lower re-lending rates for the agricultural sector and small businesses once more to support banks' further cuts of lending rates for micro, small and medium-sized enterprises, said Lian Ping, chief economist at Zhixin Investment and head of the Zhixin Investment Research Institute.

The drop in banks' lending rates will also affect deposit rates. Liang with the BOC Research Institute said: "Looking ahead, deposit rates may continue to fall and banks do not have a huge demand for long-term liabilities in the short run. These factors will reduce banks' motivation to raise long-term deposit rates."

As medium-term deposit rates now exceed long-term rates, people will be encouraged to shorten the maturity of a deposit. This will not only help banks lower the cost of liabilities but also help boost consumption, he added.

Dong Ximiao, chief researcher at Merchants Union Consumer Finance Co Ltd, agreed that the PBOC has taken various monetary policy measures since the beginning of this year to increase liquidity injected into the market with the aim of stabilizing growth and securing employment.

In order to better support the real economy, financial regulatory authorities guided banks to cut deposit rates and then promote the reduction of comprehensive financing costs of business entities, he said.

Considering that five-year fixed deposits take only a small proportion of bank deposits in China, the tangible impact of inverted interest rates on the stability of deposits at large banks is limited, he said.

Despite falling interest rates, Chinese consumers' inclination to save has been growing as the COVID-19 pandemic enters its third year. The PBOC found in a second-quarter survey that rather than spending or investing, 58.3 percent of survey respondents said they prefer to save their money, up 3.6 percentage points from the previous quarter.