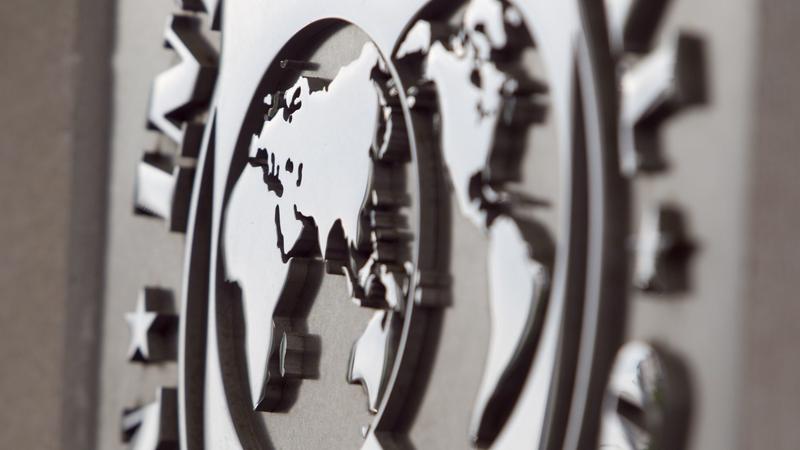 In this undated photo, the logo of the International Monetary Fund (IMF) is displayed out the headquarters in Washington, DC, US. (ANDREW HARRER / BLOOMBERG)

WASHINGTON - The International Monetary Fund cut global growth forecasts again on Tuesday, warning that downside risks from high inflation and the Ukraine crisis were materializing and could push the world economy to the brink of recession if left unchecked.

Global real GDP growth will slow to 3.2 percent in 2022 from a forecast of 3.6 percent issued in April, the IMF said in an update of its World Economic Outlook.

Global real GDP growth will slow to 3.2 percent in 2022 from a forecast of 3.6 percent issued in April, the IMF said in an update of its World Economic Outlook

The Fund cut its 2023 growth forecast to 2.9 percent from the April estimate of 3.6 percent, citing the impact of tighter monetary policy.

World growth had rebounded in 2021 to 6.1 percent after the COVID-19 pandemic crushed global output in 2020 with a 3.1 percent contraction.

"The outlook has darkened significantly since April. The world may soon be teetering on the edge of a global recession, only two years after the last one," IMF Chief Economist Pierre-Olivier Gourinchas said in a statement.

The Fund said its latest forecasts were "extraordinarily uncertain" and subject to downside risks from the Russia-Ukraine conflict spiking energy and food prices higher. This would exacerbate inflation and embed longer-term inflationary expectations that would prompt further monetary policy tightening.

Under a "plausible" alternative scenario that includes a complete cut-off of Russian gas supplies to Europe by year-end and a further 30 percent drop in Russian oil exports, the IMF said global growth would slow to 2.6 percent in 2022 and 2 percent in 2023, with growth virtually zero in Europe and the United States next year.

Global growth has fallen below 2 percent only five times since 1970, the IMF said, including the 2020 COVID-19 recession. 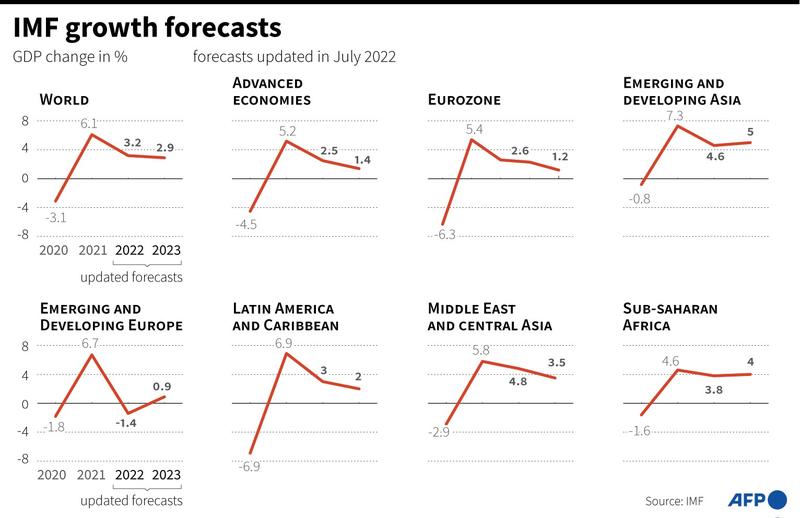 The IMF said it now expects the 2022 inflation rate in advanced economies to reach 6.6 percent, up from 5.7 percent in the April forecasts, adding that it would remain elevated for longer than previously anticipated. Inflation in emerging market and developing countries is now expected to reach 9.5 percent in 2022, up from 8.7 percent in April.

"Inflation at current levels represents a clear risk for current and future macroeconomic stability and bringing it back to central bank targets should be the top priority for policymakers," Gourinchas said.

Monetary policy tightening will "bite" next year, slowing growth and pressuring emerging market countries, but delaying this process "will only exacerbate the hardship," he said, adding that central banks "should stay the course until inflation is tamed."

For the United States, the IMF confirmed its July 12 forecasts of 2.3 percent growth in 2022 and an anemic 1.0 percent for 2023, which it previously cut twice since April on slowing demand.

Italy, meanwhile saw an upgrade in its 2022 growth outlook due to improved prospects for tourism and industrial activity.