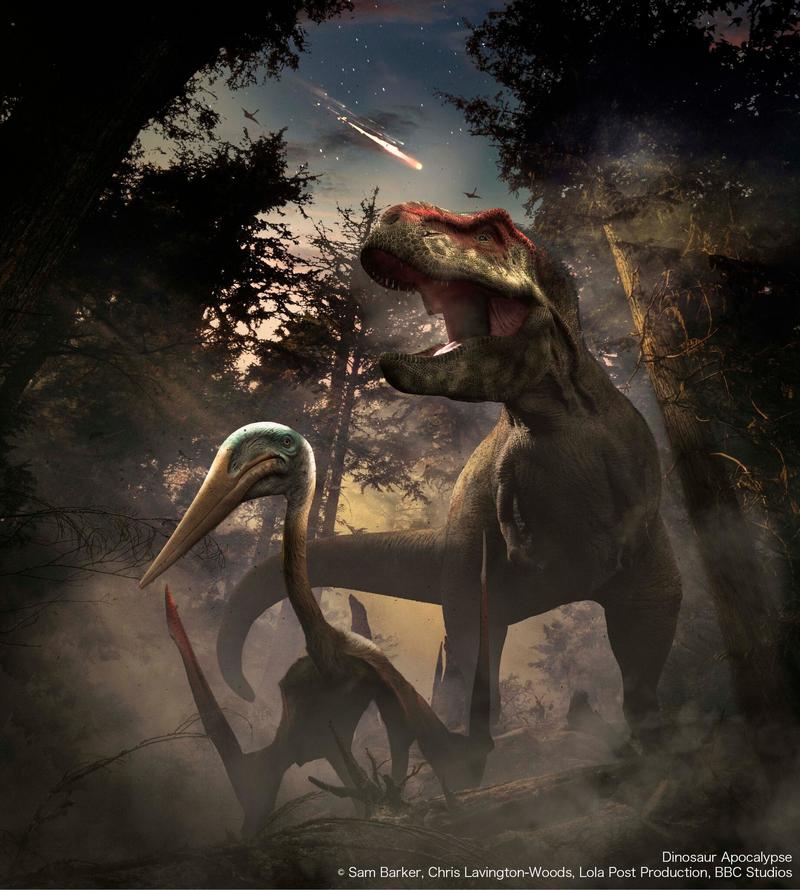 A CGI pterosaur and Tyrannosaurus rex are depicted on the eve of their extinction. (PHOTO PROVIDED TO CHINA DAILY)

With the recent high-profile discoveries of major fossil remains in Jiangxi province, and the Isle of Wight in the United Kingdom, and the release of the latest installment of the Jurassic Park movie franchise, worldwide interest in dinosaurs is as high as it has ever been.

A new BBC film, Dinosaur Apocalypse, available on ByteDance's Xigua Video platform, hopes to build on that by offering an unprecedented insight into the latest developments in knowledge of how and why the great creatures died out.

People all around the world are fascinated by dinosaurs ... so you want to get the story out to the biggest audience possible. To be able to tell this story in such detail, to such a big audience, is an absolute thrill.

The film is a BBC Studios production with international broadcast partners, including Xigua Video and Chinese tech giant ByteDance, and focuses on discoveries made at a site in North Dakota in the United States, known as Tanis, which has thrown up a remarkable amount of evidence about the meteorite impact that killed off the dinosaurs.

It combines the latest scientific research and evidence with the most up-to-date computer-generated imagery, or CGI, technology to illustrate the newest developments in understanding of the event that changed our planet forever.

"Tanis is a unique site," Helen Thomas, executive producer of Dinosaur Apocalypse, says. "So many discoveries have been made there that they can use the knowledge at other sites around the world and see if they too can help shed more light on the last days."

Robert DePalma, a paleontologist at Tanis, has a particular interest in the fossils of fish, which is what first alerted him to something that other specialists who had looked at the site had missed.

"Looking at the gills, he found there were things called ejector spherules, which are tiny particles that can only be created after an asteroid has hit the Earth, and the debris has come back down from the atmosphere as little balls, which then turn into something like clay over the years," she says.

"He found an ejector spherule encased in amber, like the fictional mosquito in Jurassic Park, and managed to date it to something called the K-Pg boundary, which is a geological feature below which dinosaur remains exist, and above which they don't, so he could pinpoint it." 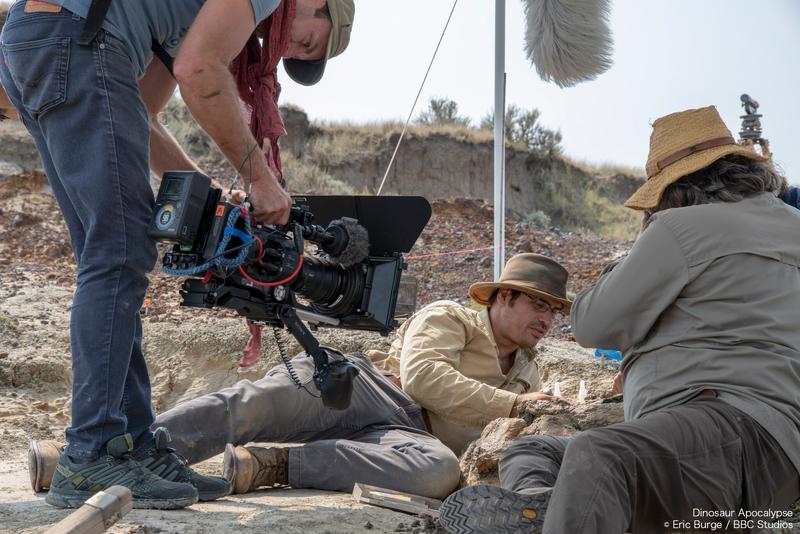 Stills from Dinosaur Apocalypse, a new BBC film, in which paleontologist Robert DePalma is filmed with colleagues uncovering a fossil in Tanis, a site in North Dakota in the United States. (PHOTO PROVIDED TO CHINA DAILY)

This boundary is generally believed to be about 66 million years ago.

"Now people know what to look for; it's given them a template for research at other sites. There might be other Tanises out there that haven't been discovered yet," Thomas says.

Tanis has been kept under wraps for many years, until its full wonder was explained in the film.

"The meteorite impact triggered what is thought to be a so-called impact winter, with wildfires and then very cold conditions, and no sunshine for years, so no plants grew, which killed off the herbivores, which, in turn, killed off the carnivores," Thomas explains.

"It's thought 75 percent of species on Earth died out, including everything over 25 kilograms, so it changed the face of the planet entirely." 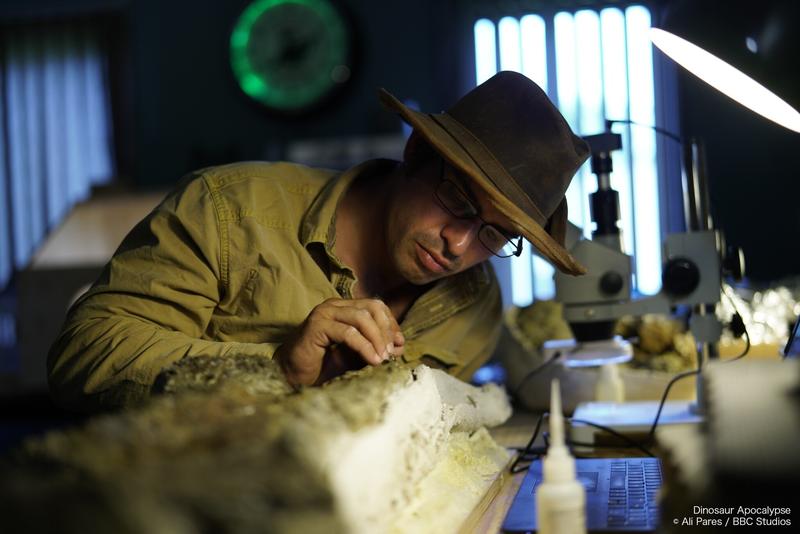 DePalma working on a fossil in a lab in North Dakota. (PHOTO PROVIDED TO CHINA DAILY)

Much of the impact of the meteorite was down to the coincidence of where it landed, in a shallow sea, with sulfurous rocks.

"Had it landed a few minutes later, in a deep ocean because of how the world was turning, or on granite, the impact would have been very different, but the rocks created toxic gases of the very worst kind," Thomas explains.

The film features CGI re-creations of what may have happened, and as it is produced by a science unit, accuracy and transparency are absolute priorities for program makers.

"We had four scientific advisers who saw everything through. Everything at every stage of the process has been checked to three sources. There's nothing we're saying that hasn't had a scientist say that we can say it.

"If there is something we can't know for sure, we will say it's speculation based on the best science that we have, but people should never feel the wool is being pulled over their eyes." 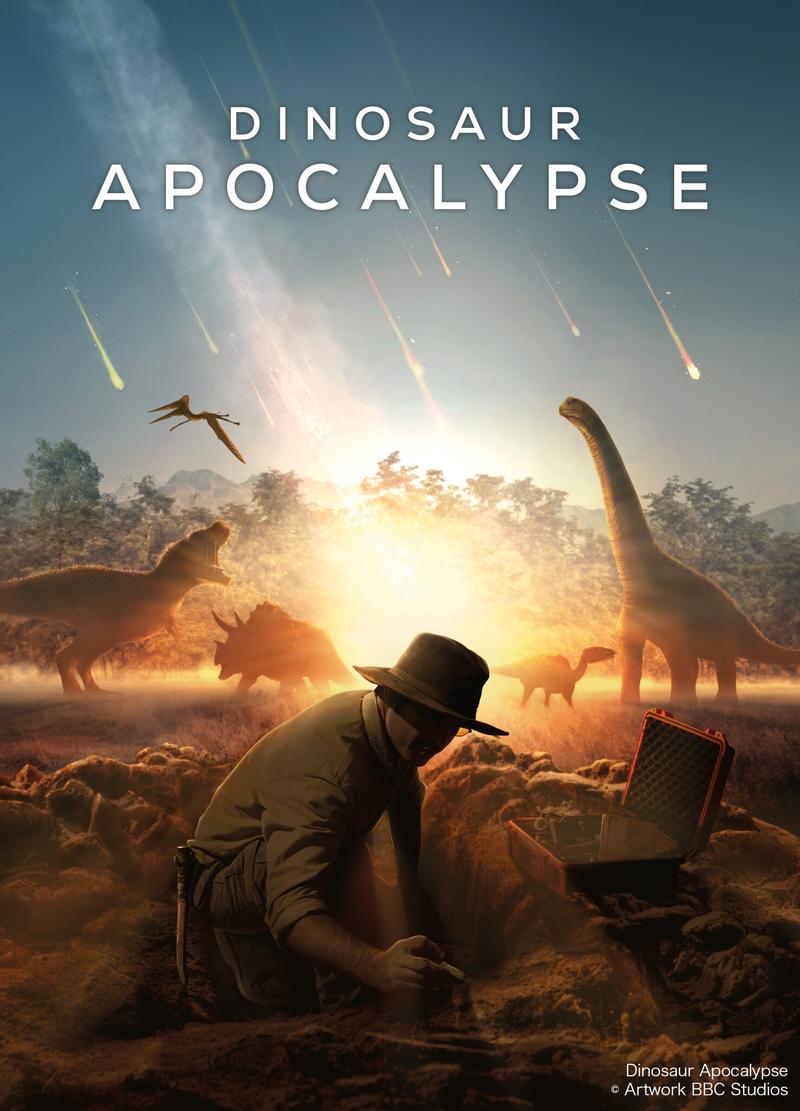 In a time of so much global division, the shared history of the dinosaurs and the earliest development of life on the planet is something that binds countries and broadcasters around the world together, and Thomas says this global effort and audience is something that inspires her team's work.

"No matter how big or small your budget, you want to make the best program you can, because this is such an important story about one day that changed the world," she says.

"People all around the world are fascinated by dinosaurs, and always will be, so you want to get the story out to the biggest audience possible. To be able to tell this story in such detail, to such a big audience, is an absolute thrill."