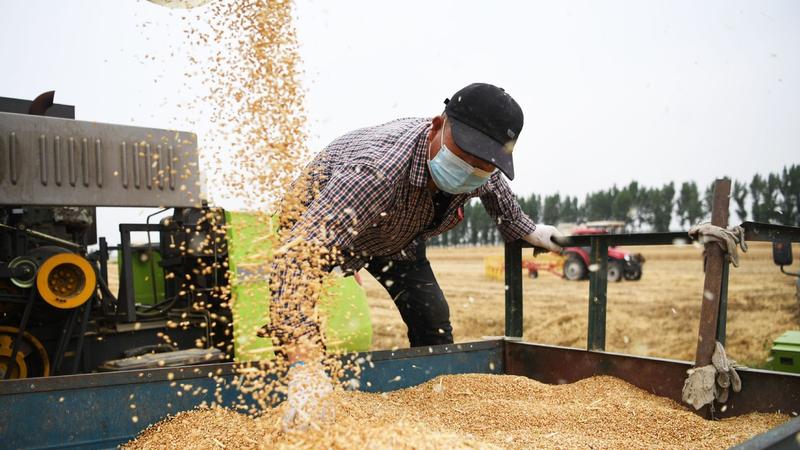 Premier Li Keqiang gave further instructions on policy measures to secure a bumper harvest for the whole year, after hearing a report at the State Council executive meeting on Wednesday on stabilizing grain production.

A statement issued after a State Council executive meeting said various sides worked hard to attain good results, and a bumper harvest of summer wheat has been secured for this year that is of a better quality than in previous years

In discussions noting that there is a complex and challenging international environment with widespread high inflation, the meeting stressed that it was imperative to remain focused on managing China's own affairs well.

A statement issued after the meeting said various sides worked hard to attain good results, and a bumper harvest of summer wheat has been secured for this year that is of a better quality than in previous years. Yields of coarse cereals and common beans registered modest growth, and the output of canola seeds had risen notably.

Nearly 80 percent of summer sowing of corn and other crops has been completed, and early-season rice and autumn grains are growing well. It is vital that due responsibilities are fully discharged to ensure that the annual grain output remains above 650 billion kilograms.

"The bumper harvest of summer grains and the sound momentum of autumn grains are not easy feats, and provide a strong underpinning for stable grain output in the whole year," Li said. "Keeping prices stable is crucial in maintaining the stability of the economy. Ensuring stable and higher grain output is a key measure to keep prices stable and enhance China's capacity for food security. It is also conducive to the stability of the global grain market."

The meeting called for efforts to organize the procurement and storage of grains harvested in the summer. Market entities under various forms of ownership will be encouraged to join in the procurement, to ensure the quality and quantity of grains in granaries.

Farmland management will be strengthened for autumn crops, and preparedness against floods, summer droughts, plant diseases, pests and other disasters will be enhanced. Efforts will also be made to ensure the production of nonstaple foodstuffs, such as pork.

The meeting also decided to provide greater policy support for automobile consumption. Measures will be taken to promote purchases of new automobiles to replace old ones. Starting on Aug 1, restrictions on cross-regional transfer of used, noncommercial, light-duty vehicles of the national emission standard V will be lifted across the country.

Purchases of new energy vehicles will be supported. Extension of the tax exemption policy for new energy vehicle purchases, which is to expire by the end of the year, will be explored in light of current conditions. Implementation of these policies is expected to increase automobile and related sales by about 200 billion yuan ($29.83 billion) this year.

"We must roll out all necessary policies to promote consumption, to spur fairly rapid expansion of consumer spending in the second half of the year and boost jobs and economic growth," Li said.