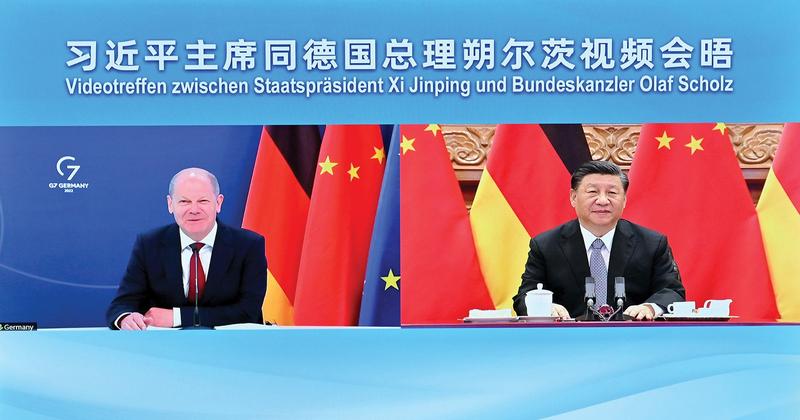 Cooperation between China and the European Union presents opportunities to both, and the two sides share far broader common interests than differences, President Xi Jinping said on May 9, as he reaffirmed Beijing’s commitment to supporting the strategic autonomy of the bloc.

Speaking during a video meeting with German Chancellor Olaf Scholz, Xi reiterated the need for Beijing and Brussels to uphold the long-term strategic consensus that their bilateral relationship is not targeted at any third party, nor is it subjugated to or controlled by any third party.

The president urged China and the EU to increase communication and enhance mutual trust with a long-term perspective and on the basis of mutual respect and a proper perception of each other.

Facing geopolitical crises, the two sides need to advocate dialogue and cooperation and offset complex changes in the international landscape with the stability of China-EU relations, Xi said.

He called on both sides to seek greater synergy in their development strategies, step up policy coordination and promote the stability and growth of the world economy with the openness of China-EU cooperation to respond to the challenges of the post-pandemic recovery.

China and the EU should focus on climate change, sustainable development and other issues concerning the future of mankind and promote the in-depth development of global governance with wide-ranging dialogue between the two sides, he said.

The meeting followed a video summit between the two leaders and French President Emmanuel Macron in March. Xi and Scholz spoke on the phone soon after the latter came into office in December.

Xi said a key factor underpinning the high level of relations between China and Germany over the past 50 years is adhering to mutual respect and win-win cooperation, which is a key experience and principle that the two sides must always uphold.

He reaffirmed Beijing’s unwavering commitment to advancing ties and scaling up cooperation with Berlin, saying that China remains convinced that bilateral cooperation can lead to greater outcomes.

The two sides should step up exchanges in areas such as climate change, macroeconomic policy, financial stability, energy security, food security and the stability of industrial and supply chains, he said.

In further exploring the potential for win-win cooperation, Xi highlighted environmental protection, trade in services, artificial intelligence and greater use of digital technologies as areas in which the two sides can further work together.

On the Ukraine issue, Xi underscored that China always stands on the side of peace and makes its conclusion independently based on the merits of each matter, and that China has been working in its own way to promote peace and defuse tensions.

With the Ukraine crisis once again bringing European security to a crossroads, Xi called for every effort to prevent the conflict from intensifying to a point of no return.

The president urged the European side to show its historical responsibility and political wisdom and promote a solution based on the long-term stability of Europe, saying that the security of Europe should be kept in the hands of Europeans.

He reaffirmed Beijing’s support for Europe in playing a positive role in promoting peace talks and in the eventual establishment of a balanced, effective and sustainable European security framework.

China welcomes all international efforts conducive to promoting peace, and relevant parties need to support Russia and Ukraine in realizing peace through negotiations, he said.

Scholz said China and Germany should build on the fine traditions of bilateral ties and keep moving the relationship forward, adding that bilateral cooperation in trade and investment, climate change, COVID-19 response, health and medical care, and education and culture should be scaled up.

Berlin will work with Beijing on the celebration of the 50th anniversary of diplomatic ties, maintain close communication and exchanges at all levels, ensure the success of the next round of intergovernmental consultation and conduct dialogue on key issues, including stabilizing global supply chains and macroeconomic policy coordination, he said.

Germany is prepared to enhance communication and coordination with China and promote the sound development of EU-China relations, he added.