By Ren Qi in Moscow 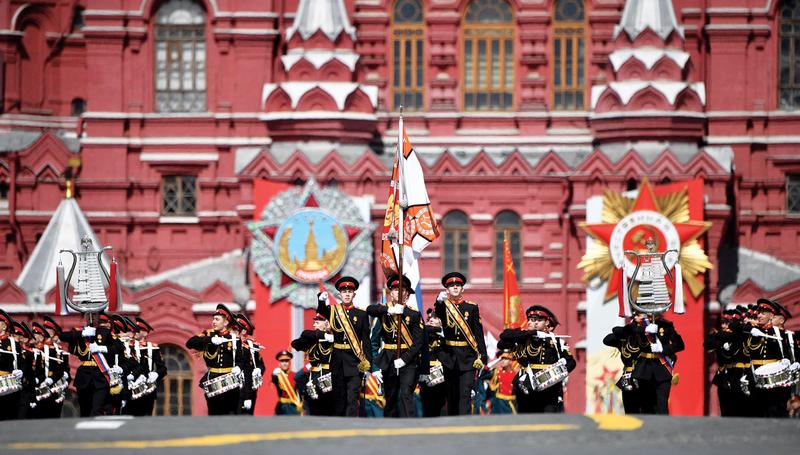 A military band marches in Red Square in Moscow, Russia, on May 9 during a military parade marking the 77th anniversary of the victory over Nazi Germany in World War II. (ALEXANDER NEMENOV / AFP)

Russian soldiers in Ukraine are fighting for their motherland because Russia faced a direct threat and a plotted attack near its borders, Russian President Vladimir Putin said on May 9 before a Victory Day military parade in Moscow’s Red Square.

The parade, marking the 77th anniversary of the Soviet Union’s Victory over Nazi Germany in the 1941-45 Great Patriotic War, involved over 11,000 troops and 131 items of military and special hardware.

A planned flyover by Russian military aircraft was canceled due to bad weather.

Putin, war veterans and guests watched the parade from the central reviewing stand in Red Square.

“You are fighting for the motherland, for her future, and so that nobody forgets the lessons of World War II, so that there is no place in the world for executioners, killing squads and Nazis,” Putin said.

Russia’s intervention in Ukraine was needed because the West was “preparing for the invasion of our land, including Crimea”, Putin said.

He said Kyiv had announced the possible acquisition of nuclear weapons and NATO had begun “active military colonization”.

“So an absolutely unacceptable threat to us was created, directly near our borders,” he said.

“Last year, we suggested to NATO countries that we sign a security treaty, but they did not want to hear us, they had completely different plans, and an attack on Crimea was being prepared,” Putin said.

“The alliance began military development of the territories adjacent to us,” he added, calling the conflict “inevitable”.

“The death of every soldier and officer is painful for us,” Putin added. “The state will do everything to take care of these families.”

Despite speculation from Western media that Putin might use the occasion to announce a mobilization of reservists for the war in Ukraine or proclaim a victory, there were no major political announcements. Nor did Putin’s speech contain any threats to use nuclear weapons.

Putin said the United States had banned US war veterans from visiting Moscow for the parade.

“We honor the troops of all allied armies — the Americans, the British, the French — as well as those who participated in the resistance, the brave soldiers and partisans of China, all those who defeated Nazism and militarism,” Putin said.