By Li Bingcun and Shadow Li in Hong Kong 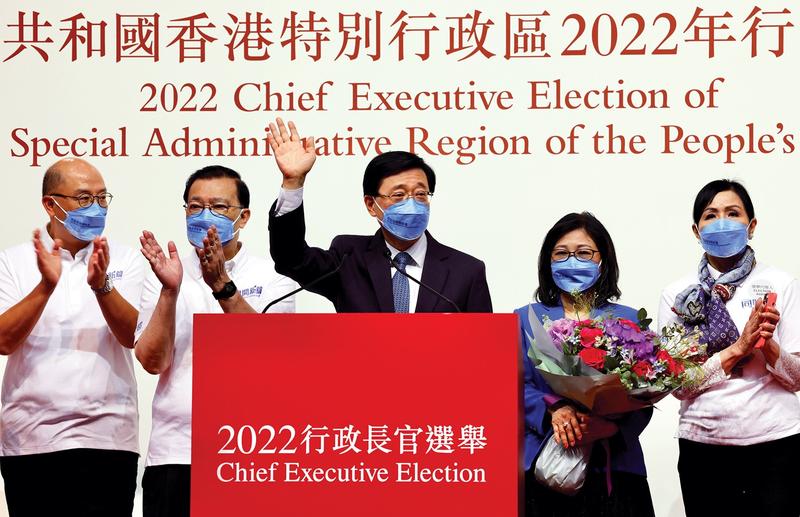 John Lee Ka-chiu (center) waves during a news conference after his victory in the chief executive election of the Hong Kong Special Administrative Region on May 8. Lee was elected as Hong Kong’s sixth-term leader after winning about 99 percent of the votes cast. He is expected to take office on July 1. (EDMOND TANG / CHINA DAILY)

The former chief secretary won 1,416 votes, about 99 percent of the Election Committee members who cast their ballots, and far surpassing the threshold of 750 votes needed to win the election.

Lee is expected to take office on July 1, after being appointed by the central government, and will serve a five-year term.

Meeting with the media after winning the election, Lee said in the next five years he will safeguard the nation’s core interests and the rule of law, and he will protect the city from internal and external threats to ensure its long-term stability.

Lee said he will prioritize tackling the most pressing issues — such as housing, healthcare and youth development — to build a caring, inclusive society, and to enhance upward mobility for the younger generation.

He vowed to proactively integrate the city into national development and expand its international connectivity to further consolidate its advantages and explore new opportunities.

Lee said he looks forward to starting a new chapter with Hong Kong communities and to building a caring, open and vibrant city that is full of hope, opportunities and harmony.

Hong Kong has accumulated many advantages since its return to the motherland, but internal frictions and external intervention brought chaos and hampered its development, he said.

Lee said that his government will be determined to confront the deeply entrenched issues that have faced Hong Kong for many years, take decisive steps and adopt efficient and effective actions to resolve them.

Luo Huining, the central government’s liaison chief in the city, said the office will, as always, render full support to the chief executive and to the HKSAR administration to help them govern the city in accordance with the law and maintain long-term stability and prosperity.

Luo said the election, conducted in a fair, lawful and just manner, has again let the public see the advancement and strengths of the improved electoral system. It also showcased the bright future of exploring a path to Hong Kong-style democracy.

He said Hong Kong is at the critical juncture of evolving from chaos to order and prosperity.

Luo called on the new-term government and the city’s various sectors to seize the historic opportunity to give full play to Hong Kong’s inherent advantages to reach new heights.

He said the liaison office, as one of the central government’s offices in the city, will continue to uphold the principle of “one country, two systems” and that of “Hong Kong people administering Hong Kong” with a high degree of autonomy to firmly safeguard the order established by the Constitution and the Basic Law of the HKSAR.

The Hong Kong and Macao Affairs Office of the State Council said the election has again demonstrated the advancement and advantages of the city’s improved electoral system. It believes the city will achieve greater success from the new starting point.

Zheng Yanxiong, director of the national security office in Hong Kong and Liu Guangyuan, commissioner of the Ministry of Foreign Affairs in the HKSAR, also pledged full support to Lee.

Both expressed confidence in the chief executive-elect and the SAR government leading the city to start a new chapter for the implementation of “one country, two systems”.

In his comments to media after winning the election, Lee spoke of the election campaign as an “incredibly rewarding, inspiring and memorable experience”, and expressed gratitude to the people who have supported him and said that he is fully confident that he and his experienced team will lead the city toward a brighter future.

He said he will invite capable and experienced patriots who have the passion and commitment to join his governing team.

Although he will take office in only two months, Lee said, he is confident that the city has many professionals who aspire to serve Hong Kong under the principle of “patriots administering Hong Kong”.

He said his administration will work together with the Legislative Council to raise the city’s governance capability.

Incumbent Chief Executive Carrie Lam Cheng Yuet-ngor said she and her government will ensure a seamless transition and render all the support needed for the new administration to take office.

On May 9, Lee met with Lam at government headquarters and also called on Andrew Cheung Kui-nung, chief justice of the Hong Kong Court of Final Appeal, and Andrew Leung Kwan-yuen, president of the Legislative Council.

Major business groups, including the Hong Kong General Chamber of Commerce, the Federation of Hong Kong Industries, and the Hong Kong Chinese Enterprises Association, expressed confidence that Lee can unite all parties in strengthening Hong Kong’s overall competitiveness and bringing long-term prosperity to the city.

Election Committee member Patrick Healy, who is also chairman of Cathay Pacific Airways, said after voting on May 8 that Lee is very competent for the city’s top job.

Another committee member, Ng Hok-ming, who chairs the Guangdong-Hong Kong-Macao Greater Bay Area Youth Association, said Lee’s manifesto is very practical and has painted a rosy picture for the city’s young people and charted a clear development path for them.

Lee, 64, has been in public service for about 45 years and has held various posts in the government. He was appointed secretary for security in 2017 and promoted to chief secretary in June 2021.

In recent years, Lee has dealt with many major events, including the 2019 social unrest, the fight against COVID-19 and the improvement to the HKSAR’s electoral system.

Lee announced his bid for the city’s top job on April 9 and eventually secured 786 nominations from Election Committee members.

He has exchanged opinions with people from various sectors since joining the race. Besides holding numerous meetings with industry leaders, he invited members of the general public to leave comments online, and he reached out to communities to listen to the demands of grassroots residents.

More than 47,000 views and suggestions were collected from HK residents through an online platform.

Later he also announced his political platform, which prioritizes work in four areas — strengthening governance, boosting housing and land supply, improving the city’s competitiveness, and building a caring society that helps young people to move up the social ladder.

Lee’s results-oriented policy direction on housing is “very good”, and the city can finally have a leader who is serious about tough issues, said Yip Sau Leung, associate professor in economics at the Nanyang Technological University in Singapore.

Lim also expects to see more outreach toward Hong Kong’s economic partners, including the Association of Southeast Asian Nations, since the city aspires to be a financial bridge between the Chinese mainland and the 10-nation bloc.

Lucio Blanco Pitlo III, research fellow of the Manila-based Asia-Pacific Pathways to Progress Foundation, voiced similar perspectives on the SAR’s new election and long-term stability and hopes for its prosperity.