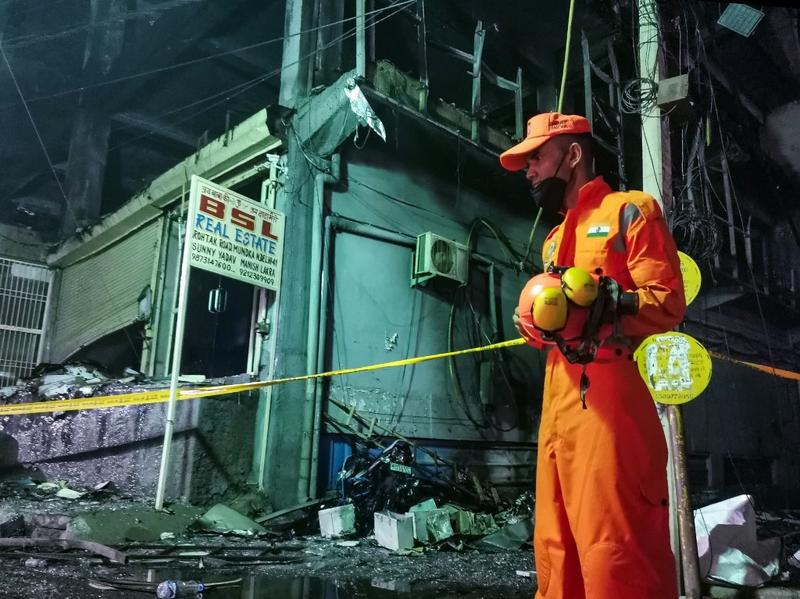 A National Disaster Response Force member stands near the site of a massive fire that broke out the day before in the western Mundka area of New Delhi on May 14, 2022. (JALEES ANDRABI / AFP)

NEW DELHI - At least 27 people were killed and 12 others suffered burn injuries after a massive fire broke out in a three-storey commercial building in the Indian capital, senior police officer Sameer Sharma said Saturday.

The fire broke out inside the building on Friday evening at 4:40 pm (local time) near the city's Mundka metro station, and the death toll became clear only by night.

The fire broke out inside the building on Friday evening at 4:40 pm (local time) near the city's Mundka metro station, and the death toll became clear only by night

Reports said the fire started from the first floor of the building at an office of a CCTV cameras and router manufacturing company.

Officials said the firefighting and rescue operations continued until early morning on Saturday. Police are yet to identify the deceased, and the injured have been admitted to Sanjay Gandhi Memorial Hospital.

Firefighters used heavy cranes to reach the top floor of the building, and 27 fire tenders were sent to contain the blaze when smoke surrounded the entire building.

Video clips showed people trying to escape the building using a rope and hanging from broken windows. Many people could be seen trying to jump to another building.

"There was only one staircase and because of that people could not go out. I think the building did not have a proper no objection certificate (NOC) from the fire department," Satpal Bhardwaj, divisional officer of the Delhi fire department told media.

Police said they have arrested the owners of the company, but the owner of the building who did not have safety clearance from the fire department is on the run.

Indian Prime Minister Narendra Modi has expressed grief over the deaths in the fire.

"Extremely saddened by the loss of lives due to a tragic fire in Delhi. My thoughts are with the bereaved families. I wish the injured a speedy recovery," Modi wrote on social media..