By Prime Sarmiento and Yang Han 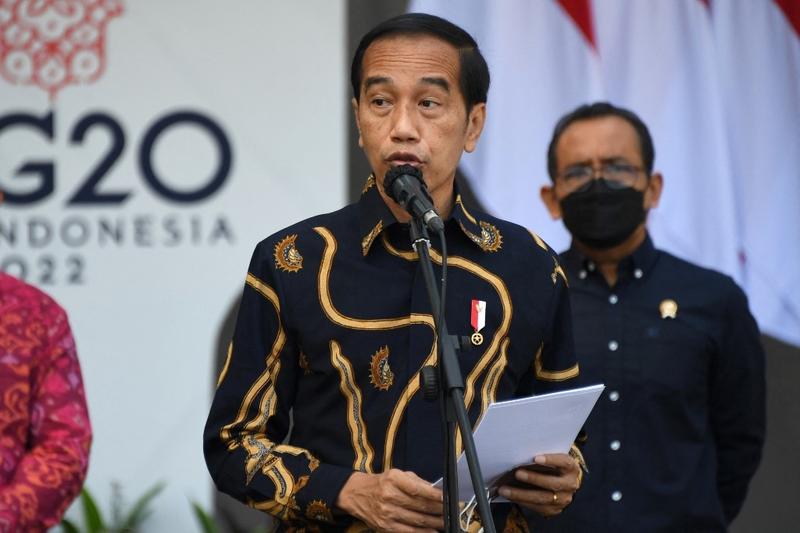 In this March 25, 2022 photo, Indonesian President Joko Widodo gives a speech at the launch of the first public electric vehicle charging station, which will be used for electric vehicles transporting world leaders during the G20 conference in November this year, in the town of Nusa Dua on Indonesia's resort island of Bali. (SONNY TUMBELAKA / AFP)

HONG KONG – Indonesia is expected to resist pressure from Western countries to exclude Russia from an upcoming Group of 20 meeting, experts say, pointing to the Southeast Asian nation's stated commitment to neutrality and non-alignment.

Indonesian President Joko Widodo, who is currently chairing the G20 — a grouping of the world's 20 major developed and developing economies — has invited Russian President Vladimir Putin to attend a summit of the bloc that will be held in the resort island of Bali in November. The United States, United Kingdom and Canada have been urging Widodo to bar Putin from attending the summit in light of the conflict between Russia and Ukraine. But other G20 member countries, including Argentina, Brazil and China, have opposed this call.

Widodo said in an online statement late last month that "Indonesia wants to unite G20, don't let there be fractures". He said that peace and stability are key to the recovery and development of the world economy.

Indonesia is making a bold gamble (by inviting both Russia and Ukraine to the G20 summit). Inviting one without the other is unacceptable.

The Indonesian leader also invited Ukraine's president, Volodymyr Zelensky, to the summit. Ukraine is not a member of G20, but Indonesia as the G20 chair can invite guests to the summit.

"Indonesia is making a bold gamble (by inviting both Russia and Ukraine to the G20 summit). Inviting one without the other is unacceptable," said Thitinan Pongsudhirak, professor and director at the Institute of Security and International Studies at the Bangkok-based Chulalongkorn University.

In an interview with China Daily, Thitinan said that with Widodo inviting both Putin and Zelenskyy, Indonesia will be able "to take the high ground and (showcase) … a platform for both sides to be at the same table".

While one cannot say what the situation will be in November in relation to the Russia-Ukraine conflict, "the Indonesian move seizes the initiative", he said.

Thitinan said there is an "outside chance" that Indonesia could serve as a mediator, noting "this would be the ideal outcome for Indonesia, holding the G20 successfully with a global broker role on the Russia-Ukraine war".

Ian Wilson, senior lecturer in politics at Australia's Murdoch University, has a less sanguine view. He said that Indonesia's invitation to Ukraine can serve as a "symbolic overture", but the G20 is not exactly a venue for the reconciliation of Russia and Ukraine.

Indonesia's foreign policy is anchored on the principle of 'bebas dan aktif' — an Indonesian phrase which translates to "independent and active".

Indonesia is independent and will therefore not side with any world power.  At the same time, Indonesia is not a passive state, and it aims to actively contribute to the settlement of pressing global issues.

For example, Indonesia's Ministry of Foreign Affairs said that the G20 presidency will help Indonesia "earn credibility or global trust in leading the global recovery efforts (from the pandemic). Credibility is invaluable capital in diplomacy and foreign policy".

Indonesia's adherence to an independent and active foreign policy has been evident ever since then Indonesian President Sukarno convened the Bandung Conference in 1955. The conference, attended by Asian and African leaders, ended with a pledge to remain neutral in the Cold War. The Bandung Conference led to the formation of the Non-Aligned Movement in 1961.

To this day, the principle of non-alignment continues to guide Indonesia's foreign policy.

Indonesia was among the ASEAN member countries that voted in favor of the UN General Assembly's resolution demanding Russia to "immediately, completely and unconditionally withdraw" its military forces from Ukraine. Indonesia, however, rejected the Western countries' move to impose unilateral sanctions against Russia.

Yohanes Sulaiman, a lecturer in International Relations at Universitas Jenderal Achmad Yani in Bandung, said that it is unlikely that Indonesia will succumb to any pressure to disinvite Putin from the G20 summit. He said Indonesia will not side with either the US or China, and that it considers Russia as a third force that can maintain the global balance of power.

Yohanes said Indonesia also needs to protect its relationship with Russia as Moscow is a key source of investments and military weapons.

He said that there is also domestic pressure on Widodo to reject the Western countries' demand to exclude Putin from the G20. Any move otherwise will be viewed as weakness and bowing to the Western demands, Yohanes said.