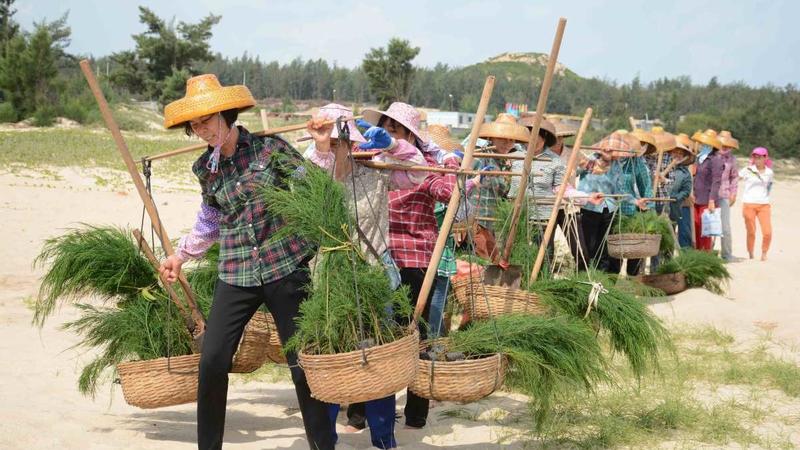 HAIKOU - When Tao Fengjiao was struck by lightning while planting trees in south China's Hainan province, she emerged largely unscathed, with only a plume of black smoke rising from her hat.

Her fellow planters, all women, were terrified and thought that Tao had been killed, until she slowly got to her feet.

The bay, located on the tropical island of Hainan, was once a desert with hardly any living plants, but is now covered with lush green vegetation thanks to Tao Fengjiao and her sisters

"They all said that the miracle testified to the old saying that 'one good turn deserves another.' It must have been a blessing in return for my years of tree-planting efforts," she said.

Tao, 63, hails from Qizi Bay, Changjiang Li autonomous county. The bay, located on the tropical island of Hainan, was once a desert with hardly any living plants, but is now covered with lush green vegetation thanks to Tao and her sisters. The rural women, dubbed the "green detachment of women" by locals, have been planting coastal-protection forests around the bay for over three decades.

Tao still recalls the bay's sad condition back in the 1990s.

"No trees or grass would grow on the land," she said, adding that whenever a typhoon hit, the sky would be filled with dust and sand, and several local fishermen died due to the loss of visibility.

The local government had launched an afforestation project, hoping to increase the area's vegetation coverage. In 1992, a businessman took over the project on the barren land and paid the locals 7 yuan (about $1) per day per person to plant trees.

In Changjiang, most of the local men earned their living through fishing. Therefore, it was mainly the women that joined the tree-planting business, expecting some extra money to help their husbands ease the financial burden.

However, none of them were able to grow trees in the vast desert, with its high temperatures all year round.

Some German experts were responsible for guiding the project, but they shook their heads in sympathy, saying that the local geographical conditions made the mission impossible. As the efforts seemed to be futile, the businessman gave up the project.

The local government sent several local forestry experts to continue studying seed breeding at the bay and started to provide subsidies for the "green detachment of women" for planting trees.

Guided by these local experts, the female tree-planting team persevered with their work, focusing on two species. One was a plant nicknamed "wild pineapples," which usually grows to between 4 and 14 meters tall, while the other was the casuarina tree, an evergreen plant that measures between 6 and 35 meters tall. It was hoped that these two would help to anchor the ever-shifting sand.

However, the project was really hard work for the women. To protect the tree saplings from being blown away by the strong wind, they had to soak them in fresh water first, thus increasing their weight.

Back then, the rural Changjiang had no paved roads, nor any suitable vehicles that could carry the trees. Tao had to load about 60 kg of saplings onto her shoulders and walk bare-foot across the scorching sand.

"When we ran out of fresh water, we drank from cow troughs. The hot weather in the desert often turned our food bad, but we persevered. We could plant up to 400 trees a day at that time," said Tao.

Some people couldn't stand the tough conditions and left. But due to Tao's persistence, the team grew to more than 60 people at its peak.

Their decades of hard work paid off. To date, the tree-planting team has successfully grown about 5.88 million trees covering an area of 2,253 hectares, according to the latest statistics released by the county's forestry authorities.

At the end of 2018, the local government opened a museum to the public celebrating the women's tree-planting efforts. Tao is now one of the museum guides.

Though she may not recognize many Chinese characters on the display boards due to her poor education, she still vividly recalls scenes and stories from the past.

"I just cannot hold back my tears whenever I look back on the tough times we've been through. I love the trees as much as I love my kids," Tao said.