Inflation races away to 40-year high in US

By Heng Weili in New York 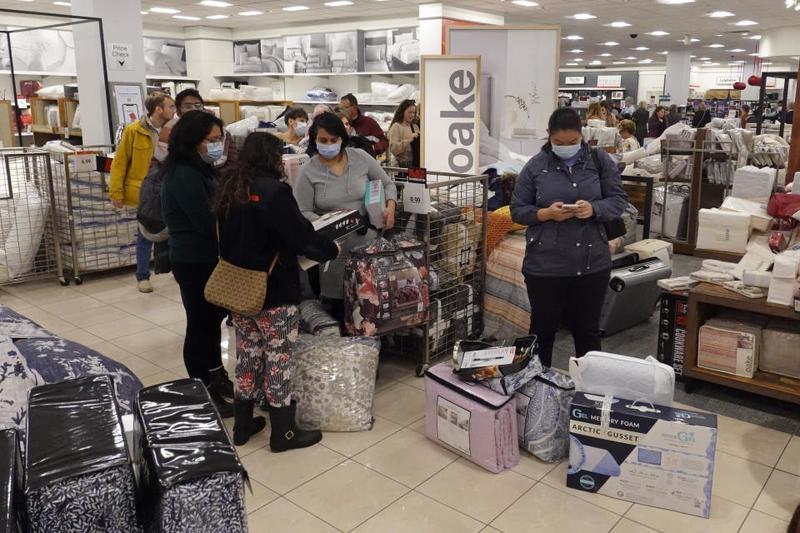 Customers wait in line to checkout during a Black Friday sale at Macy's, Nov 26, 2021, in Indianapolis, US. (DARRON CUMMINGS, FILE / AP)

US consumer prices jumped last year at the fastest pace in four decades, the government confirmed on Wednesday, underscoring the potent inflation wave that has sapped public support for US President Joe Biden even as the economy recovers from the pandemic.

The consumer price index released by the US Department of Labor on Wednesday rose 7 percent in 2021. It was the largest year-on-year increase since June 1982, following a 6.8 percent rise in November.

The rising costs for rental accommodation and used cars persisted, bolstering expectations that the Federal Reserve will start raising interest rates as early as March.

The report followed one on employment on Friday showing that the labor market was at or near maximum employment. High prices and full employment are ripe conditions for inflation.

The inflation data came one day after US Federal Reserve Chair Jerome Powell said that the central bank will have to raise interest rates more if inflation remains elevated.

"If we see inflation persisting at high levels longer than expected ...if we have to raise interest rates more over time, we will," Powell said at his confirmation hearing before the Senate Banking Committee, noting that US inflation is running "very far above" the central bank's target of 2 percent.

"Inflation ended 2021 very hot,"Ben Ayers, senior economist at Nationwide, told The Associated Press. Ayers and other economists say prices may cool off as snags in the supply chain ease, but inflation will remain elevated throughout 2022.

"Expectations shifted in recent months to expect it (inflation) to continue getting worse for a time before it gets better," Will Compernolle, senior economist at FHN Financial, said on Wednesday in a note, adding:"The report will keep the Fed on its path to finish tapering in March and start hiking rates this year."

The White House predicted in a tweet that "the rate of price increases will moderate in the months ahead as we make progress with the pandemic and other challenges".

Still, while the data contained signs of a nearing summit, relief may not necessarily come quickly.

"The peak is close, but the speed of the coming downshift is uncertain," Ian Shepherdson of Pantheon Macroeconomics told Agence France-Presse.

As inflation continues to surge in the country, Biden's job approval rating has tumbled to 33 percent in a poll by Quinnipiac University in January, reflecting people's dissatisfaction over the administration's response to rising inflation and a resurgence of COVID-19, the New York Post reported.

For the Republican opposition, the inflation data underscored the party's belief that the Democratic president has mishandled the recovery.

"This trend isn't 'transitory', and it's all happening under Democrats' one-party control," tweeted Kevin McCarthy, the top Republican in the House of Representatives. His party is seen as the favorite to win control of the lower house of Congress in elections in November.

With the Biden administration facing public discontent over the rise in inflation, the White House has attempted to sort out supply chains to relieve shortages and address alleged price fixing in industries like meatpacking to lower prices, but the most potent actor against inflation is the independent Federal Reserve.

"Inflation will slow in 2022 as supply chains reopen and prices for some items, like vehicles and energy, decline as supply catches up to demand," said Gus Faucher, chief economist at PNC Financial in Pittsburgh. "But inflation for many other goods and services will be higher in 2022 than before the pandemic, due to higher labor costs and input prices. Housing will also contribute to high inflation in 2022."

Businesses had to scramble to meet demand. They couldn't hire fast enough to fill job openings or buy enough supplies to meet customer orders. As business roared back, ports and freight yards couldn't handle the traffic.

But some experts, including former treasury secretary Lawrence Summers, partly blamed Biden's $1.9 trillion coronavirus relief package, with its $1,400 checks to most households, for overheating an already hot economy.

"In retrospect, it was more than what was needed," said Ellen Gaske, an economist at PGIM Fixed Income. "I point a finger very strongly at the nature of fiscal policy at this time. It was not just the size of the (relief) packages, but those direct cash payments to households added purchasing power very directly. And when you pushed that up against the supply disruptions because of COVID, the pressure valve was higher inflation."

Agencies and Xinhua contributed to this story.