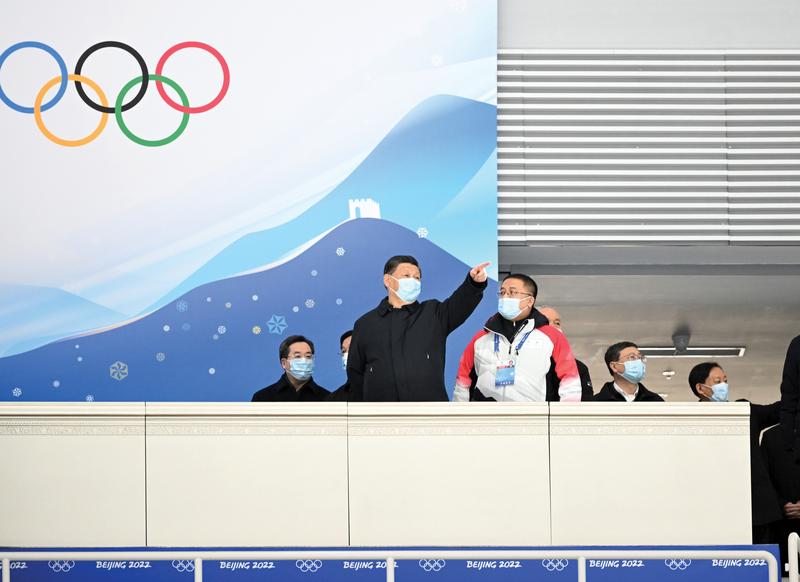 President Xi Jinping, who is also general secretary of the Communist Party of China Central Committee, inspects preparations for the 2022 Olympic and Paralympic Winter Games at the National Speed Skating Oval in Beijing’s Chaoyang district on Jan 4. (SHEN HONG / XINHUA)

President Xi Jinping has called for efforts to ensure the Beijing Winter Olympics and Paralympics are “a full success”, saying that China has made a solemn commitment to the international community to host great Games.

Xi, who is also general secretary of the Communist Party of China Central Committee and chairman of the Central Military Commission, made the remark on Jan 4 when inspecting the preparatory work for the Beijing Games, which will open early next month.

During the inspection tour, Xi said that thanks to years of efforts, work on all fronts has mostly been completed. “We are fully confident and able to present a brilliant, exceptional and excellent Olympic Games to the world.” He encouraged those involved in the preparatory work to firm up their confidence and boost their morale in the final phase of efforts to ensure streamlined, safe and splendid Games.

At the National Speed Skating Oval, the sleek long-track speed skating venue in Beijing, which is dubbed the “Ice Ribbon” due to the 22 light ribbons surrounding its exterior, Xi said its design and construction follow the concept of hosting “green, inclusive, open and corruption-free Olympics”.

He called for increasing Chinese elements in operational management to make the venue an important window to showcase the charm of Chinese culture and to present the country’s progress in ice and snow sports.

Xi praised the ice-making technology used at the venue, saying it is low-carbon with zero emissions. Efforts should be made to promote technology transfers to enable it to be applied in broader fields and make contributions to advancing the country’s green transformation, he added.

During his visit to the Main Media Center, which will be the media headquarters for registered print media and broadcasters worldwide, Xi said that epidemic prevention and control is a major test in hosting the Games.

Live audiences are restricted due to the pandemic, so media communications will become more important than at previous Olympic Games, he said.

Xi also called on international and domestic media to tell the stories of athletes’ competitions, China’s preparations and hosting of the Games and Chinese people’s hospitality so that they will present a full, multidimensional and panoramic view of the Beijing Games to the world.

While inspecting the Winter Olympic Village, which will provide more than 3,000 beds and business services to the athletes and officials traveling to the Olympics from around the world, Xi called for providing well-tailored services to the athletes, particularly by increasing barrier-free facilities for those with disabilities, and building a “safe, pleasant and comfortable home” for them.

He also stressed the need to strictly follow closed-loop management in the village and to strengthen pandemic prevention and control measures.

In the village, Xi expressed his appreciation to volunteers and those providing services and support for the Games. He said that hosting the Games will boost the people’s confidence in realizing national rejuvenation.

At the Games-time Operations Command Center, Xi underlined the importance of strengthening unified command and coordination and called for efforts to improve contingency plans in responding to emergencies.

The final leg of Xi’s inspection tour took him to an ice and snow sports training base with some high-tech training facilities such as a wind tunnel. While highlighting the role of technology in competitive sports, he encouraged the country’s athletes to work hard for excellence at the Beijing Games.

“Only those who withstand the freezing cold can enjoy the fragrance of plum blossom,” said Xi, quoting a poem to encourage the athletes to cherish the precious opportunity after years of preparations for sporting excellence.

The 2022 Winter Olympics will take place from Feb 4 to 20, followed by the Paralympic Winter Games from March 4 to 13.