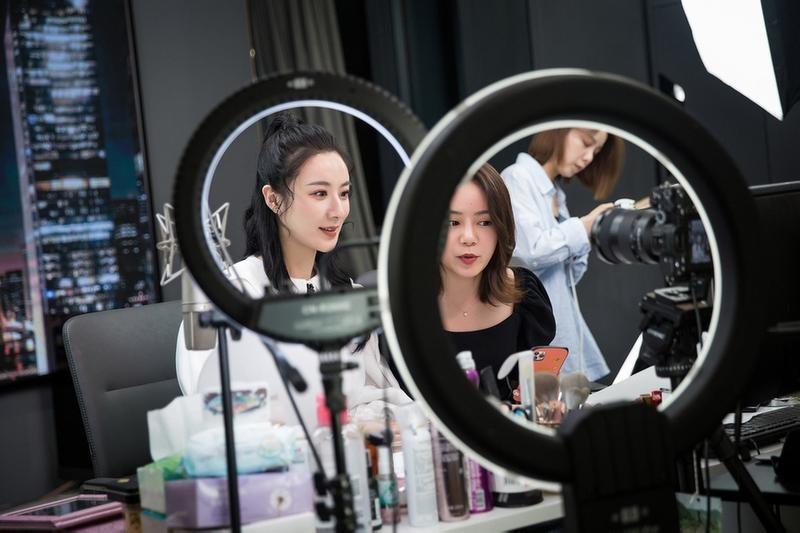 In this undated file photo, Viya (left), one of China's top e-commerce livestreamers, and her assistants promote products via livestreaming platforms in Hangzhou, Zhejiang province. (CHEN ZHONGQIU / FOR CHINA DAILY)

BEIJING - In a year highlighted by increasing uncertainties, China has stayed steadfast in advancing regulations over the digital economy to guide the healthy development of the booming sector.

Such heavy fines imposed on an e-commerce livestreamer have rarely been seen in recent years, and the case revealed in part the disorderly expansion of the platform economy, analysts said.

Rather than a "sharp turn" in its economic governance direction as misunderstood by some Western observers, China's regulatory moves are part of its long-standing efforts to bring economic activities back on the track of healthy and lawful development.

The internet behemoth is not the first platform firm to come under the scanner against the backdrop of China's anti-monopoly efforts. Earlier in March, the SAMR had imposed penalties on 12 companies, including Tencent, Baidu and Didi, for violating the anti-monopoly law.

The regulatory moves came as the leadership made it one of the policy priorities for 2021 to strengthen anti-monopoly oversight and prevent the disorderly expansion of capital at the Central Economic Work Conference in 2020.

A look into the SAMR's statements respectively issued after it declared such penalties may help shed light on that, the common goals of the oversight measures are to ensure the sector's sound development and protect consumers' legitimate rights and interests.

Globally speaking, problems are emerging along with the robust growth of the platform economy, including abusing dominant market positions and limiting competition, said Yu Xiaohui, head of the China Academy of Information and Communications Technology, noting that it has become a challenging issue for regulatory agencies in all countries.

While advancing domestic oversight, China has been active in seeking cooperation with the international community to promote digital governance.

On Nov 1, the Ministry of Commerce announced that China had filed an application to join the Digital Economy Partnership Agreement.

Signed in June 2020 by Chile, New Zealand and Singapore, the DEPA is a new type of trade partnership agreement seeking to bolster digital trade by regulating issues related to the digital economy, including digital inclusion, data flows and protection and artificial intelligence.

China's application to join DEPA is in line with its direction of further deepening domestic reform and expanding high-level opening-up, and will help the country strengthen digital economy cooperation with other members, the ministry said in a statement.

As a leading player in the digital economy, China's participation in the agreement will not only promote its development of digital economy and trade but also boost the recovery of the world economy, said Liu Ying, a researcher with the Chongyang Institute for Financial Studies, Renmin University of China.

In February, China issued the Guidelines for Anti-Monopoly in the Platform Economy to detail a set of rules that could rein in the monopolistic conduct of the country's top internet firms

China has made constant efforts to adapt the rule of law regarding anti-monopoly regulation in the digital era.

The Draft Revision of the Anti-Monopoly Law, issued in early 2020, added for the first time the provisions for determining the dominant market position of internet companies.

In February, China issued the Guidelines for Anti-Monopoly in the Platform Economy to detail a set of rules that could rein in the monopolistic conduct of the country's top internet firms.

China's national anti-monopoly bureau was inaugurated in Beijing in November, marking another major institutional arrangement in this regard.

In 2022, the country will further implement policies promoting fair competition and intensify its efforts on anti-monopoly and anti-unfair competition, according to the Central Economic Work Conference held in early December.

The meeting also underlined setting up "traffic lights" and enhancing supervision of capital in accordance with the law and preventing its unchecked growth.

In an interview with Xinhua, Zhang Gong, head of the SAMR, said that China will strengthen oversight and law enforcement in the coming year in key areas, including the platform economy, sci-tech innovation, information security and people's livelihoods.