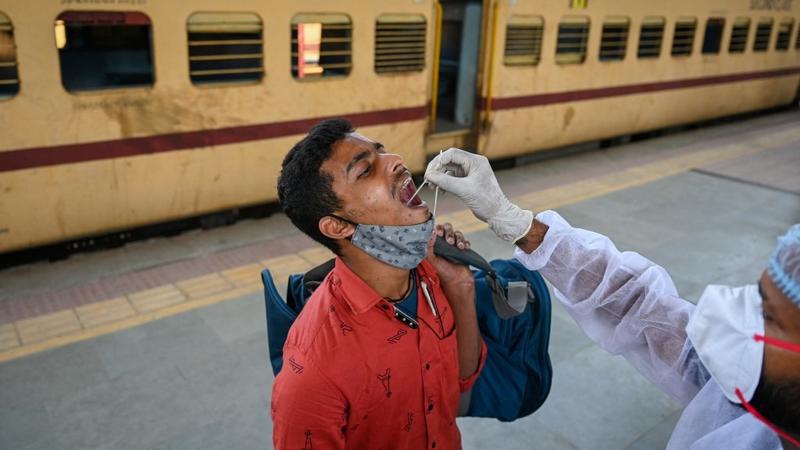 A health worker takes a swab sample of a passenger to test for the Covid-19 coronavirus at a railway platform in Mumbai on Oct 26, 2021. (PUNIT PARANJPE / AFP)

ANKARA / BANGKOK / BISHKEK / TOKYO / NEW DELHI - The Asian Development Bank (ADB) has approved a $1.5 billion loan for Indian government to purchase COVID-19 vaccines, it said in a statement on Thursday.

The ADB said the loan would fund at least 667 million vaccine doses for an estimated 317 million people, adding that it also expected to co-finance an additional $500 million for vaccine procurement.

India is aiming to fully vaccinate nearly 945 million people aged 18 years and above, about 70 percent of its population.

ADB said the loan would be financed through its $9 billion Asia Pacific Vaccine Access Facility, launched in December 2020 to provide rapid and equitable vaccine-related support to the development bank's member countries.

India has so far administered 1.19 billion vaccine doses - at least one dose for 82 percent of its 944 million adults, with 44 percent of adults having received a second dose.

Byron Shire’s vaccination rate has lagged behind that of the broader state, sparking fears there could be an outbreak in the area as New South Wales reopens following months of travel restrictions

A backpackers’ hostel in Australia’s popular beach town of Byron Bay has been locked down after a positive COVID-19 case, just days before the area is expecting thousands of school graduates to arrive for year-end celebrations.

Those locked down in the venue are being supported with food and health care, local MP Tamara Smith said on Facebook. Police are stationed outside the Aquarius Backpackers to make sure the 84 staff and guests remain inside for 48 hours, the Australian Broadcasting Corp reported.

A woman from Victoria state who was living at the hostel tested positive, the ABC reported.

Byron Shire’s vaccination rate has lagged behind that of the broader state, sparking fears there could be an outbreak in the area as New South Wales reopens following months of travel restrictions. Still, nearly 81 percent of residents aged 16 and over are now fully inoculated, data shows, compared to 92.1 percent statewide.

The decision comes after the capital confirmed only five new infections in the previous day, the lowest of this year.

The alert level of the infection situation has been kept at the lowest since Oct 28, and experts are now believing that medical institutions are capable of balancing treatment for the COVID-19 patients with ordinary care in a stable manner.

It is the first time that the alerts for both infection status and the healthcare system have been at the lowest level since the meetings began in July of last year.

The number of daily confirmed COVID-19 cases has declined sharply across Japan after the inoculation program was expanded to the general population, with the rate of fully vaccinated exceeding 75 percent as of Nov 24, according to the government data.

Inoculation program for the COVID-19 booster shots will start as early as December, the government has said. Those who want to get the booster shot need to wait for at least eight months after they received their second doses.

The health ministry also plans to expand the vaccination program to children under 12 years old, which is possibly to start in February 2022.

Kyrgyzstan on Wednesday reported 43 new COVID-19 cases, bringing its total caseload to 182,996, according to data from the country's Republican Headquarters for Combating COVID-19.

The death toll from the virus rose by three to 2,732. Altogether 94 people recovered in the last 24 hours, bringing the total number of recoveries to 177,693, the data showed.

The Central Asian country launched a nationwide vaccination campaign on Mar 29 after the arrival of China-donated Sinopharm vaccines. It is also inoculating its population with the Sputnik-V, AstraZeneca and Pfizer vaccines. 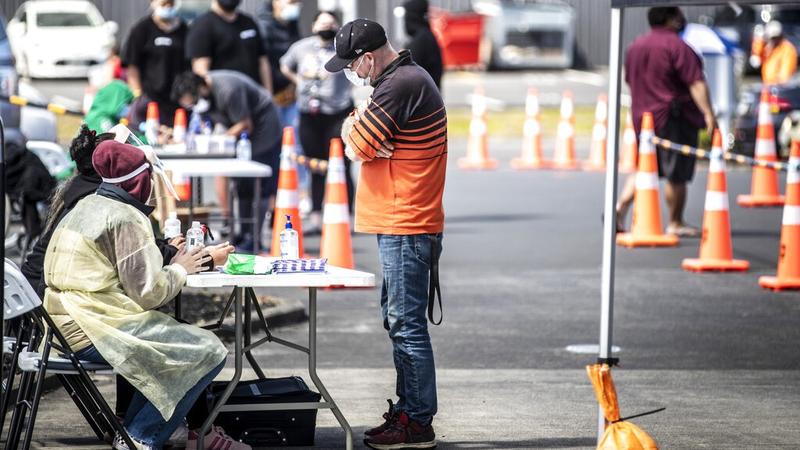 New Zealand will invest about NZ$1 billion ($687 million) in testing, contact tracing and case investigation as the country moves away from the use of lockdowns to allow businesses to operate.

The nation will increase use of rapid antigen testing from Dec 1 to supplement PCR tests, Associate Minister of Health Ayesha Verrall said in a statement. New Zealand will adopt a system on Dec 3 that codes each region red, orange or green depending on vaccination levels and exposure to COVID-19.

“Delta is here, so we are ensuring we have the tools in place to support the transition to the new framework,” Verrall said.

IHH Healthcare Singapore, which runs four private hospitals in the city, is offering a “finder’s fee” of up to S$12,000 ($8,770) to staff who bring in an experienced nurse, or S$3,600 for a fresh graduate nurse, as the city-state struggles to cope with an exodus of medical workers, the Straits Times reported, citing hospital administrators.

While the shortage of healthcare professionals is a global problem made worse by COVID-19, staff have left in Singapore due to factors including high stress, long hours, and the desire to return home.

Close to 500 foreign doctors and nurses quit in the first half, compared with roughly the same number in the whole of last year, Janil Puthucheary, a senior minister in the health ministry, said earlier this month.

Singapore’s health minister said a high vaccination rate and growing natural immunity could protect it from surges currently engulfing Europe and the US, even as cases on the island rose.

One of the highest vaccination rates in the world and growing natural immunity could protect Singapore from a COVID-19 resurgence like that currently engulfing Europe and the US, even if another wave hits as expected, Health Minister Ong Ye Kung said.

Singapore’s immunized population is half as likely to die of COVID than influenza, while those who aren’t vaccinated are five times more likely to succumb to the infection, Ong said in an interview at the Asia Summit on Global Health in Hong Kong. That shows that the virus can be endemic, provided enough people are immunized, he said.

About 85 percent of Singaporeans are fully vaccinated, and it is the third-most inoculated place in the world, according to Bloomberg’s Vaccine Tracker. Nearly one-in-four people have already received a booster shot, Ong said. 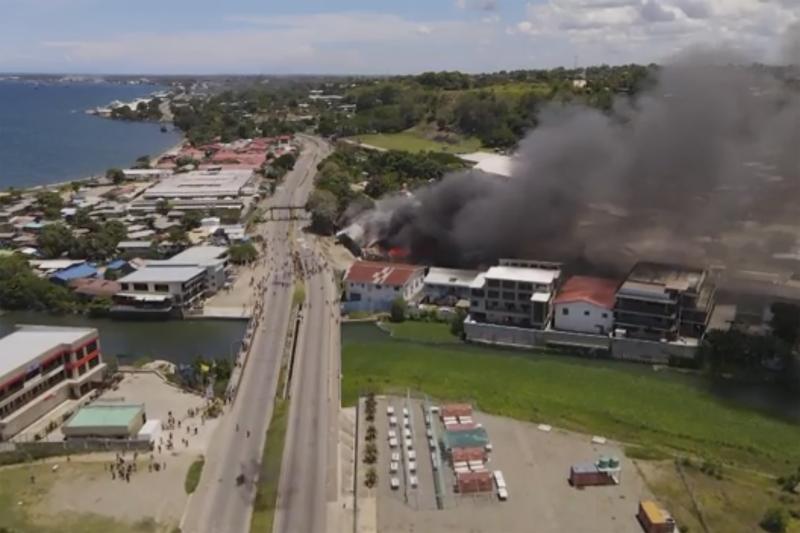 In this image from aerial video, smoke rises from burning buildings during a protest in the capital of Honiara, Solomon Islands, Nov 25, 2021. (AUSTRALIAN BROADCASTING CORPORATION VIA AP)

Australia will deploy more than 100 police and military personnel to aid the Solomon Islands, Prime Minister Scott Morrison said on Thursday, as protesters in the Pacific Island nation defied a curfew to protest for a second consecutive day.

Solomons Prime Minister Manasseh Sogavare on Wednesday declared a 36-hour lockdown in Honiara after the latest unrest, calling it "another sad and unfortunate event aimed at bringing a democratically elected government down".

The lockdown, which would run until 7 am on Friday, would "allow our law enforcement agencies to fully investigate the perpetrators of today's events and to prevent further lawless destruction," Sogavare said.

The Royal Solomon Islands Police Force urged people attending schools and businesses around Honiara to stay home to avoid being affected by unrest.

"We want to make sure that our streets, schools and businesses will reopen soon after the lockdown," said RSIPF deputy commissioner Juanita Matanga in a statement.

Prime Minister Manasseh Sogavare called for the lockdown in an address that was broadcast late on Wednesday, after police had earlier deployed tear gas to break up protests.

As well as looting stores, demonstrators set fire to a thatched roof building on the grounds of the parliament - as it was sitting - and a police station, said the prime minister.

Thailand was among the first countries in Asia to reopen for foreign arrivals, and it is seeing a slow recovery, including new hotels touting longer stays for individual travelers.

Hospitality firms like Asset World Corporation Pcl, which opened its 19th property this month, saw the majority of its bookings come from Western countries and the Middle East.

"About 70 percent of total bookings came from Europe, including Germany, UK, Scandinavian countries, followed by the US, Middle East, and Asia," chief executive Wallapa Traisorat told Reuters, adding that domestic travel helped. "For November, we should see 30 percent occupancy, and in the fourth quarter we hope to see better momentum from the reopening."

Centara Hotels and Resorts is moving ahead with plans to open a 1.1 billion baht hotel on the island of Samui in December.

Turkey's domestically developed COVID-19 vaccine, Turkovac, has applied for emergency authorization, Health Minister Fahrettin Koca said on Thursday, adding he hoped the shot would be available for use by year-end.

Speaking at his ministry's budget debate in parliament, Koca said work on Turkovac was nearing completion, and added the shot would mark the first Phase III clinical research project to be fully carried out by Turkey.

Turkey began developing Turkovac this year, but the launch date for the vaccine has been beset by delays. President Tayyip Erdogan has said Turkey would make the shot available globally.

Turkey's daily infection numbers have hovered around 30,000 since mid-September, while the daily death toll, which peaked at 290 in September, remains near 200. The government has called on people to take personal measures and get vaccinated, attributing the high infections to insufficient vaccination levels.