By Yang Jun in Guiyang and Chen Meiling 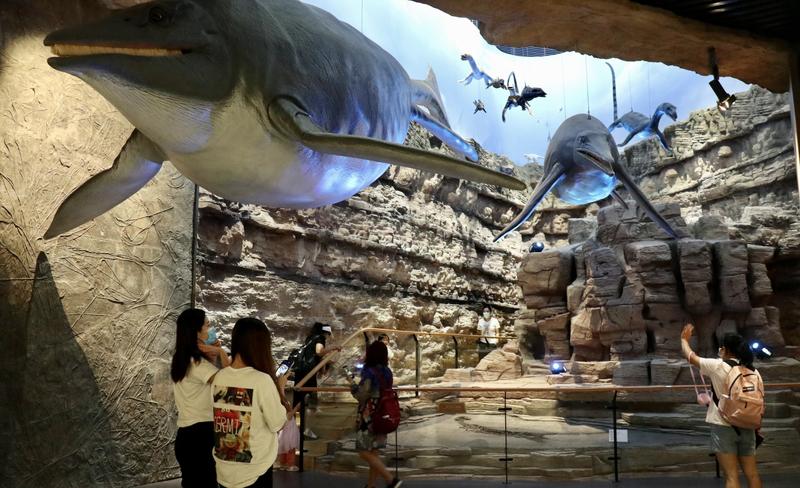 In a glass room in the first floor basement of the Geological Museum of Guizhou in Guiyang, Guizhou province, the hissing of precision instruments breaks the silence as experts concentrate and carefully "wake up" fossils that have been sleeping for hundreds of millions of years.

Before they are placed on display, fossils are usually found in slates or rocks, and few people recognize what they are. Restorers have to remove the accretions around them to bring the ancient animals and plants to life. It's a process that also helps in the scientific study of the existence and evolution of ancient species.

Restorer Luo Yongming, 51, sits unmoving for almost an hour, staring into the microscope as he uses a pneumatic pen on a crinoid fossil. Crinoids are a family of marine animals that still exist today as starfish and sea urchins, and the part Luo is cleaning is only 3 to 4 centimeters long.

With an exhibition area of 16,000 square meters, the museum is the biggest natural science museum in Guizhou. It has more than 100,000 exhibits, including fossils, mineral crystals and geological materials, and since it opened in August, it has received about 10,000 visitors.

Liu Chuanyuan, head of the museum's technological research department, said it has collected more than 3,000 fossils from public and local geological parks and restored about 500 since 2018. Most of the fossils are of reptiles, vertebrates, fish and invertebrates. Six researchers work in the basement, and it may take months to complete one fossil.

For most people, the process is repetitive and boring, but not for Luo.

"Touching species from ancient times and trying to restore them to their original state is like talking to history and preserving ancestral memories. The more I restore, the more I feel the magic," he said. 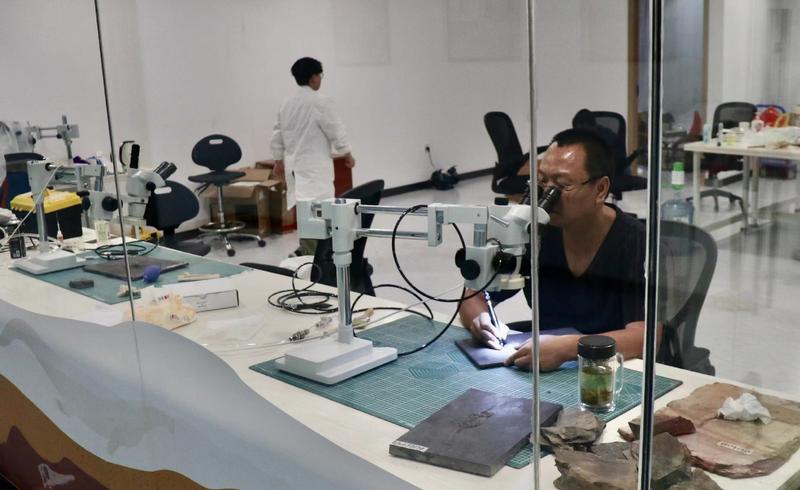 When Luo was young, he played in the mountains around the factory where his father worked. He found many stones containing fossilized insects, which first aroused his interest. He later studied mining at college and then joined a geological prospecting team after graduation.

In 1998, a friend brought a crinoid fossil for restoration to the office next to Luo's at the geological investigation research institute. Seeing the elderly researchers, wearing reading glasses and trembling as they handled the fossil, Luo offered to help. "They were worried I would damage it, but I told them I could do engraving, so they agreed to let me try. It turned out that I did better than them," he said.

In 2007, he started hunting for fossils, restoring them himself. When construction began on the geological museum in 2016, Luo helped collect samples from the public. He has worked there since 2019.

When found, fossils are usually encased in layers of stone. "Each layer may represent one year of sedimentation, and some bones are covered by rocks 2 to 3 kilometers thick," he said.

The most difficult part is to tell the bone from the rock. The pneumatic pen should not touch fossils directly when rock is being removed. "Some bones, such as teeth or the bones of some fish, are as thin as a needle. That's when we need a microscope."

For some precious fossils, experts will use needles to remove the surrounding rock, which is safer but slower.

They take a break every half an hour to maintain precision. It takes between a week and several months to restore a fossil. "Learning how to do it is not the problem but it's difficult to stay enthusiastic, patient and focused," Luo said. 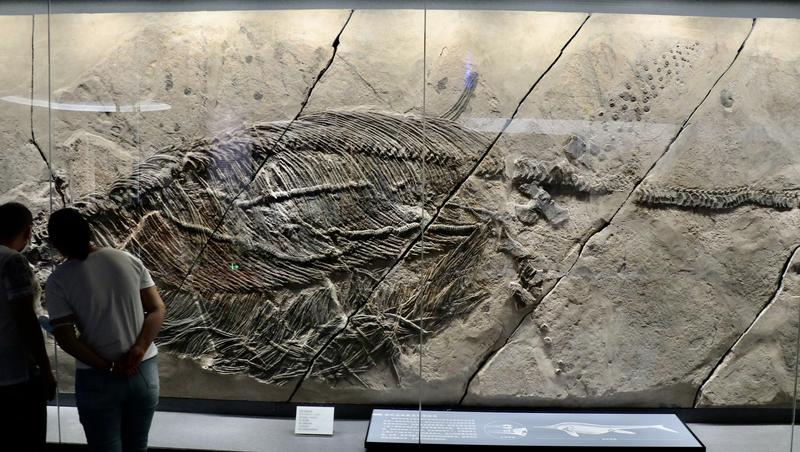 One huge crinoid fossil－one of the major pieces displayed at the museum－is 12.5 meters long and 8.2 meters wide and was assembled from more than 300 pieces. The work was done by seven restorers over 40 days.

"We should respect every fossil as it is a piece of history. We aim to present the creature in its most original state, and to encourage the audience to think," he said.

For Luo, the museum's most impressive fossil is a 1-meter-long Qianichthyosaurus zhoui, an ancient ichthyosaur that was a creature a little like a dolphin. It was attacked by a larger ichthyosaur, which broke several of its ribs and its spine. It swam out into deeper waters to hide, but it died, carrying at least nine babies. Its history can be deduced from its remains. The restorers worked for about eight months so that visitors can see the tiny ichthyosaur babies in its belly.

Luo said there is no major in fossil restoration at Chinese universities, so they often recruit geologists with some knowledge of paleontology.

Since there are many fossils waiting, the museum has a restoration team of 15 in Guizhou's Xingyi city to recruit workers, who are offered training and equipment. Liu said that those who do well can work at the museum.

Young restorer Li Zhouqiang, 27, practiced for one and a half years in Xingyi before being sent to the museum. He said that when he first started, it took a month to restore a fossil 30 centimeters long. Though the work sounds boring, Li said he is "enchanted" by working on something that "conveys a sense of life hundreds of millions of years ago".

Wang Jin in Guiyang contributed to this story.