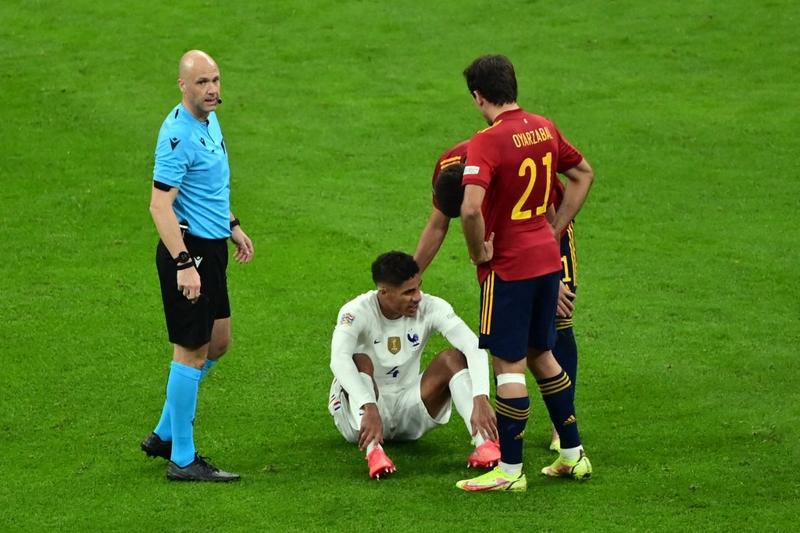 LONDON - Manchester United have confirmed they will be without central defender Raphael Varane for a "few weeks" with a groin injury which he suffered while playing in the UEFA Nations League final against Spain on Sunday.

Man United entertain Atalanta in the Champions League next Wednesday

"Raphael Varane sustained a groin muscle injury in the UEFA Nations League final and has commenced rehabilitation at the club. He will be out for a few weeks," confirmed his club on Wednesday.

Varane's injury comes at a bad time for Manchester United with England defender Harry Maguire likely to miss Saturday's visit to Leicester with an injury and a tough series of games in the coming weeks.

United entertain Atalanta in the Champions League next Wednesday and then visit Anfield to play Liverpool in a crunch game in the race for the Premier League on October 24th, before travelling to face Tottenham on October 30th and receiving the visit of local rivals, Manchester City a week later.

Elsewhere Steve Bruce looks to be edging towards the exit after just over two seasons at Newcastle United.

The club's takeover by Public Investment Fund (PIF), along with PCP Capital Partners and RB Sports & Media last week has opened the door to big money signings in the coming months, but Bruce is expected to be shown the door before this weekend's Premier League game against Tottenham with the new owners expected to look for a big name coach to oversee their ambitious plans.