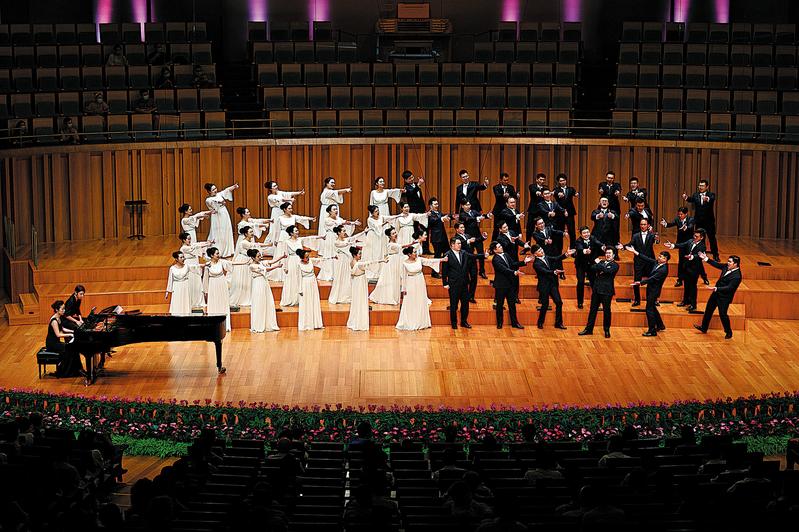 The in-house chorus of the National Center for the Performing Arts performs during a music festival in Beijing in August. The video of its rendition of the theme song of the cartoon series, Black Cat Detective, has attracted more than 5 million views online. (PHOTO PROVIDED TO CHINA DAILY)

A video of the in-house chorus of the National Center for the Performing Arts, featuring a rendition of The Song of Mr Black from the classic Chinese cartoon series, Black Cat Detective, has been viewed more than 5 million times on social media.

The 1984 cartoon follows a brave and clever black cat who's a detective. He tackles tough cases and brings peace to the animals in a forest.

Led by conductor Wu Lingfen, the chorus sang the song with special arrangements－members acted as cat detectives and a mischievous mouse, named One Ear, who is the other main character of the series.

"Black Cat Detective is one of my favorite cartoon series. I grew up watching it over and over again. It was a big surprise to see the China NCPA Chorus performing the song with an interesting adaptation," writes a netizen on the chorus' account on Bilibili, a popular Chinese video site.

Another viewer comments: "I couldn't help but sing along with the chorus when watching the video. There was a moment when I almost cried. Black Cat Detective has lingered in my mind though I am not a kid anymore."

Wu, a renowned Chinese choral conductor and music educator, has been conducting the China NCPA Chorus since 2009. She says she was not surprised by the response to the performance. The song was performed at the end of a concert as an encore piece on Aug 20 at the NCPA in Beijing. The concert, featuring songs adapted from ethnic groups in China, closed the annual China NCPA August Chorus Festival.

"Audiences are eager to enjoy live concerts once again. We wanted to bring them a concert with a relaxing and fun experience. So we designed the encore song by adapting The Song of Mr Black," says the 76-year-old musician, who is a professor at the conducting department of the China Conservatory of Music and vice-president of the China Chorus Association.

"The feedback of the audience at the concert was very warm. So it's not surprising to see the similar reaction from online audiences."

Wu says the popularity of the performance is quite an achievement for the chorus "because more people will become interested in choral singing and come to our shows to enjoy more songs, especially songs they've never heard of, such as folk songs from ethnic groups".

Tenor Yang Guangmeng performed the role of Black Cat Detective for the chorus. Born and raised in Chifeng, Inner Mongolia autonomous region, he graduated with a degree in singing from Tianjin Normal University in 2007 and joined the NCPA chorus in 2009.

"I was very excited and read messages left by the viewers, which were touching," the 37-year-old says about the response to the video.

The song, though from an old cartoon series, still wins audiences because the message it delivers is positive and powerful, Yang adds.

The tenor notes that the chorus also rapped for the first time during the performance, which was challenging yet proved to be successful. The lyrics of the rap not only express a longing to return to childhood but also encourage people to face difficulties in daily life with courage and confidence.

"As children, we lived carefree lives. As adults, we have lots of pressure and need to be brave. We not only want to bring great music to audiences but also to comfort them," Yang says.

According to Wu, it has been her longtime wish to promote a choral culture in China because she believes that "singing releases tension, feeds the soul and opens the heart". 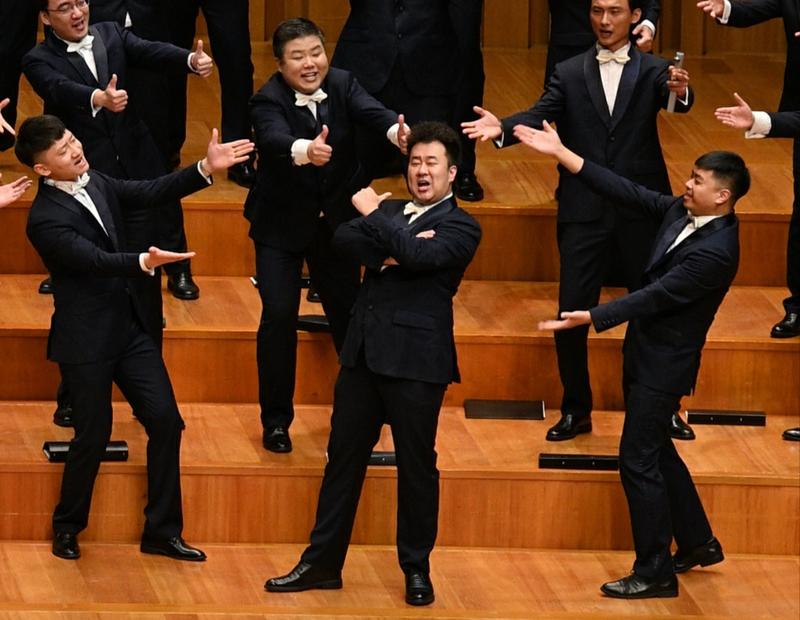 The in-house chorus of the National Center for the Performing Arts performs during a music festival in Beijing in August. The video of its rendition of the theme song of the cartoon series, Black Cat Detective, has attracted more than 5 million views online. (PHOTO PROVIDED TO CHINA DAILY)

The NCPA chorus was founded to meet the demand of the company's opera productions. Since it opened to the public in December 2007, the NCPA has attracted musicians from around the world and produced both Western classic and Chinese operas.

"We recruit singers from all over the country. Unlike other choruses, members of the China NCPA Chorus receive training for both singing and acting because one of their main jobs is to perform in operas," says Wu. "The ability to act makes them versatile."

Li Tinglei, 30, joined the chorus in 2015 after he graduated from the China Conservatory of Music's vocal arts and opera department.

"Many schools, from primary schools to universities, have choirs that make choral singing popular among Chinese students. This is also a major source of entertainment for retired people. There are many amateurs singing in parks and communities. That is why we have many loyal fans watching our concerts," says Li.

"Besides enjoying our singing, they come to learn new songs."

In the past few years, choral singing has gained fans in China.

Rainbow Chamber Singers, founded by conductor Jin Chengzhi, is one of the most popular choruses in the country.

In the beginning, students who had majored in music were the main members of the group, which soon started to attract amateur singers, like white-collar workers who joined as a hobby. Now, with 70 members－mostly amateur singers－the group meets once a week to rehearse and gives one show a month. Jin writes 30 to 40 new songs every year.

In January 2016, led by Jin, members put on sunglasses and sang the song, Zhang Shichao, Where on Earth Did You Leave the Key to My Apartment?, at the end of a concert. The performance went viral.

Another song, So Far, the Sofa Is So Far, depicting the hectic daily lives of young people, was also a hit that year.

Unlike many other choral groups that take on serious themes and are performed with demanding vocal techniques, these singers have simpler lyrics for their songs and sing with humor.

Jin has tried to offer a different kind of choral singing. In 2019, the group released an album, titled The Songs of Evening, featuring seven songs written by Jin, which capture "seven moments of a man's life". The lyrics are abstract. They're about oceans, mountains, the wind and clouds, and the singers use their voices to portray the scenes in the songs rather than through a concrete story.

On Aug 27, Rainbow Chamber Singers released a new album, The Star River Tavern, a Rediscovery, which is a choral cycle consisting of 13 songs composed by Jin. The conductor and songwriter tried to tell a story set against the backdrop of 1982－the protagonist is alone and in despair after his father and wife die. As Jin elaborates, the songs allow the protagonist, who is lost and in anguish, to find himself and heal.

Besides choral singing, the album also features narration and performances of musical instruments, including the harp, to portray different scenes.