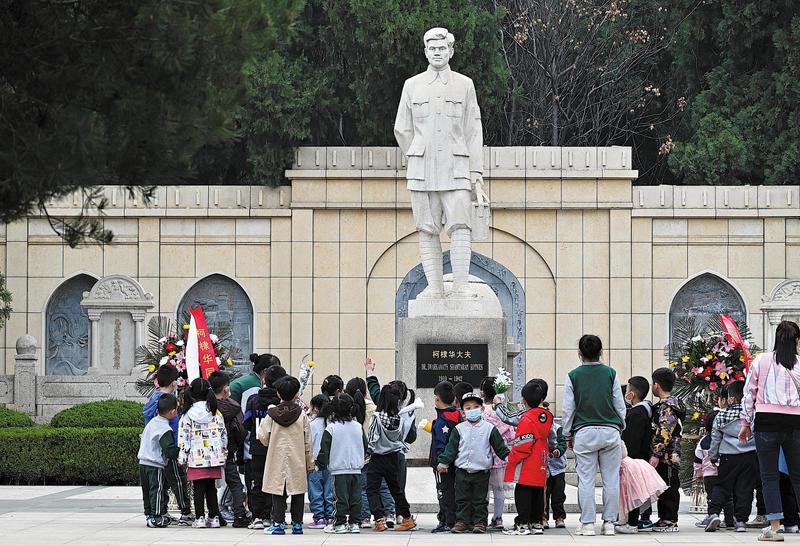 A film made in the 1940s about a young Indian doctor who traveled to China to selflessly treat soldiers injured fighting Japanese invaders proved a hit with Indian moviegoers.

Seventy-five years since that black-and-white feature film was shown in theaters, a new movie is being produced about the medical hero.

Dr Kotnis’ glorious services to mankind must inspire more than 2.7 billion living on both sides of the border. He sacrificed his life not just for the wounded Chinese but for humankind

Srikant Kotnis, 98, a cousin of Dwarkanath Kotnis, in a message to China Daily

There is much to tell about the life and times of Dwarkanath Kotnis, with many stories about his work collected from researchers and the public in China.

Lou Yue, a research fellow at North China Martyrs' Memorial Cemetery, said: "He helped his patients with food. He was careful and quick while changing dressings so that the wounded wouldn't feel too much pain. He even gave his horse and hat to patients who were on the march."

Kotnis, also known by his Chinese name Ke Dihua, worked so hard that during one battle in China in 1940, he performed operations for up to 72 hours and treated more than 800 patients in 13 days.

For the soldiers of the Eighth Route Army and villagers, the efforts made by Kotnis won him the nicknames "Dr Thoughtful" and "Old Ke"－a term used by Chinese to refer affectionately to friends.

"That he is still so deeply revered in China is testimony to the dedication with which he nursed and treated wounded soldiers in China more than eight decades ago."

Srikant Kotnis, 98, a cousin of the doctor, said in a message to China Daily: "Dr Kotnis' glorious services to mankind must inspire more than 2.7 billion living on both sides of the border. He sacrificed his life not just for the wounded Chinese but for humankind.

"The upcoming movie should capture the true spirit and values Dr Kotnis upheld."

Dwarkanath Kotnis was one of five Indian physicians in a team sent to China in 1938 to provide medical assistance. The team arrived one year after China mounted full-scale resistance against the aggression of Japanese invaders.

Lou, who has spent years studying the doctor's life, said: "At that time, China was in tremendous difficulty. We had an acute shortage of practitioners and medicines."

The other four doctors in the medical team also had Chinese names ending with hua, the character for "China", but Kotnis was the only member not to return to India. 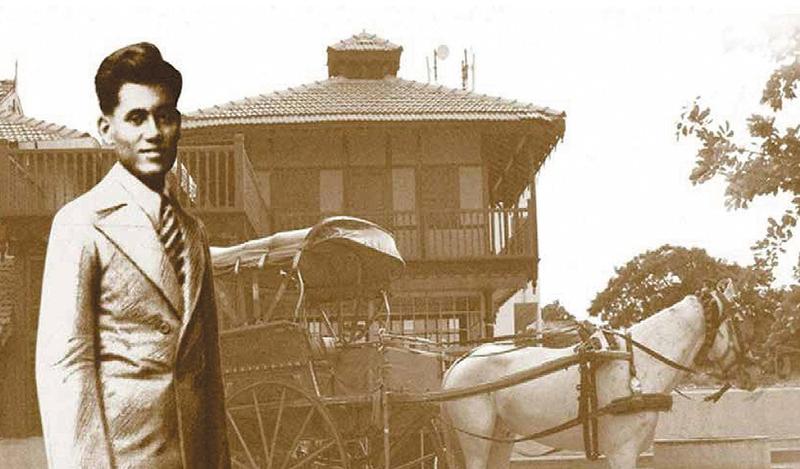 Born to a middle-class family in India's western state of Maharashtra on Oct 10, 1910, Dwarkanath Kotnis graduated from Seth G S Medical College of the University of Mumbai in 1936. He was 28 when he arrived in China.

Before leaving India, the team had heard that the Communist Party of China was different from the Kuomintang. When the team members arrived in China, they asked to go to the CPC-led battlefield behind enemy lines and work where the Chinese had suffered the most.

After determined efforts, Dwarkanath Kotnis finally arrived in the Shanxi-Chahar-Hebei Border Region in 1940 to be part of the Hundred-Regiment Campaign. He then moved to Gegong village, Tangxian county, Hebei province, where he performed surgeries in the line of fire.

Fighting shoulder to shoulder with CPC members and the Eighth Route Army, "Old Ke" became well-known in the region.

For the doctor, the CPC-led war against Japanese aggression was a great revolutionary fight for justice, with the Eighth Route Army acting as an "excellent university" turning out tens of thousands of revolutionary young people. He also found that the anti-Japanese base areas led by the CPC were totally different from areas controlled by the Kuomintang.

Mrigendranath Gantait, president of the Dr Kotnis Memorial Committee in West Bengal, India, said after one tour to China: "Despite hearing news of his father's death, Kotnis did not return to India. Instead, he reaffirmed his commitment to continue his work in China." 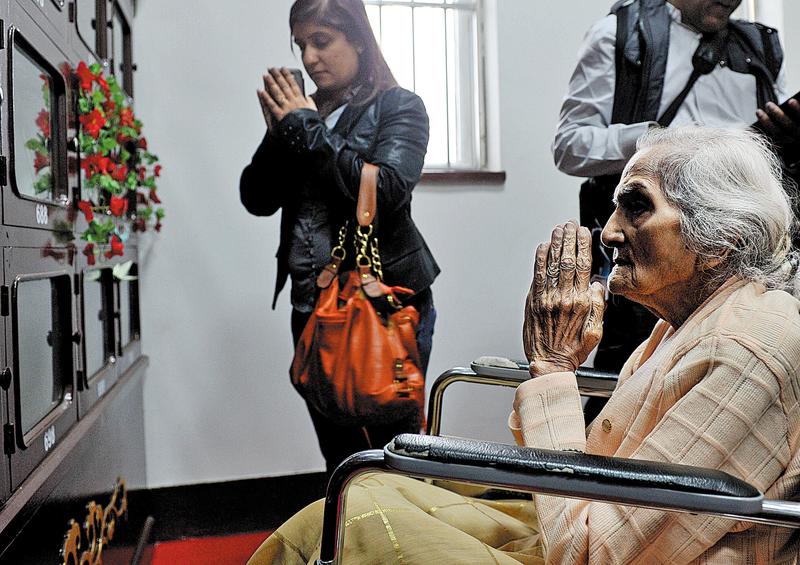 A sister of Kotnis, 92, pays tribute to him in Shijiazhuang in 2013. (ZHAI YUJIA / CHINA NEWS SERVICE)

In 1941, Dwarkanath Kotnis was appointed director of the Dr Bethune International Peace Hospital in Shijiazhuang, Hebei province, named after the Canadian surgeon Norman Bethune who made valuable contributions to the Chinese people. After his appointment, the Indian medic performed some 2,000 operations.

Lou said: "Dr Kotnis swore an oath by the tomb of Dr Bethune－'I will live a life as yours'. He lived up to his oath."

When a student graduated, the doctor wrote words of encouragement. They included "Study hard for the sake of the liberation of oppressed mankind" in English, and "Victory in the War of Resistance against Japan" in Chinese.

With no textbooks, Kotnis compiled them himself.

On the evening of Dec 8, 1942, when he was writing page 173 of his second surgery textbook, he collapsed, with his pen leaving a long line on the paper. He later died of epileptic seizures, age 32.

Although he was a CPC member for only five months, Kotnis dedicated himself completely to the cause he believed in.

Gantait said, "He made his highest sacrifice by giving his life for the cause of the Chinese people's liberation movement." 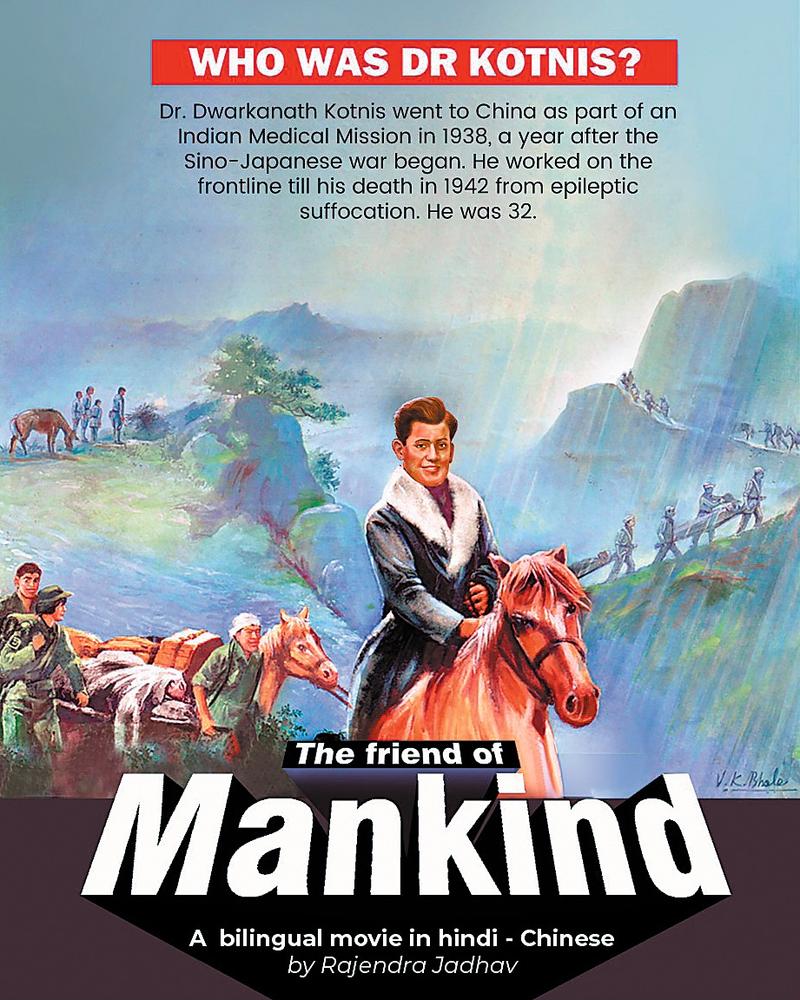 A poster for The Friend of Mankind, the second movie to be made on the life of Dwarkanath Kotnis. (PHOTO PROVIDED TO CHINA DAILY)

Late Chinese leader Mao Zedong was deeply affected by the doctor's death, writing in his eulogy: "The army has lost a helping hand, the nation has lost a friend. Let us always bear in mind his internationalist spirit."

In China, Kotnis fell in love, marrying Guo Qinglan, a nurse who worked with him and who gave birth to their son less than four months before the doctor's death.

The boy was named Yinhua－the two Chinese characters literally meaning "India" and "China." However, he died in 1967 age 24 as a result of medical malpractice, shortly before he was due to graduate from medical college.

Nearly eight decades after the doctor's death, memories of him are still cherished in China.

Apart from a school named after him－Shijiazhuang Ke Dihua Medical Science Secondary Specialized School－there are memorials to him in Shijiazhuang, capital of Hebei, and in Tangxian county, where he once worked.

Dwarkanath Kotnis is so highly respected in China that when the nation's leaders travel to India, they make a point of visiting or sending flowers to his relatives.

Jadhav, from the Dr Kotnis Memorial Committee, fondly recalls the day Premier Li Keqiang met Kotnis' family on May 22, 2013, during a visit to India. Over a cup of tea, Li chatted with Manorama, Kotnis' nonagenarian sister.

"She was visibly touched by the warmth displayed by the Chinese premier," said Jadhav, who received the Five Principles of Peaceful Coexistence Friendship Award from Chinese President Xi Jinping in 2014 in recognition of his commitment to Sino-Indian friendship.

In 2006, President Hu Jintao met the doctor's relatives, including his two sisters. He paid tribute to the medic, describing him as "a bridge between China and India", according to government records.

The sacrifices and bravery shown by the doctor during his time in China continue to inspire his family members, as well as Indian medics, filmmakers and numerous other admirers.

Some 79 years after his death, his fans in India believe that if the doctor's selfless acts are depicted properly to the next generation, this can help promote understanding between India and China.

North Court High School in Solapur, Maharashtra, where Kotnis was educated, has maintained a century-old register of his enrolment.

In 1976, a railway medical facility in the city of Solapur, Maharashtra, was named Dwarkanath Kotnis Memorial Hospital.

Kartik Kendhe, an Indian film director, has started to make a Marathi-language movie on the doctor's life. The film will have English and Chinese subtitles.

Part of the movie will be shot in Hebei, and the aim of the film is to remind everyone of the Sino-Indian friendship built by Kotnis, Kendhe said.

Jadhav is excited about the new movie. "I only hope that The Friend of Mankind will inspire the people of China and India. These two countries are among the oldest civilizations in the world," he said.

To build strong cultural ties between the two nations, on April 3 during Qingming Festival, the Chinese Consulate in Mumbai and the Dr Kotnis Memorial Committee jointly held an online memorial event for the doctor.

Sun Weidong, China's ambassador to India, said on the 110th anniversary of the doctor's birth last year, "He is a hero to remember, a monument to eternity."

Swaran Singh, chairman of the Centre for International Politics, Organization and Disarmament at Jawaharlal Nehru University in New Delhi, said experts have suggested on many occasions that the two countries should highlight the doctor's legacy to enhance their mutual cooperation.