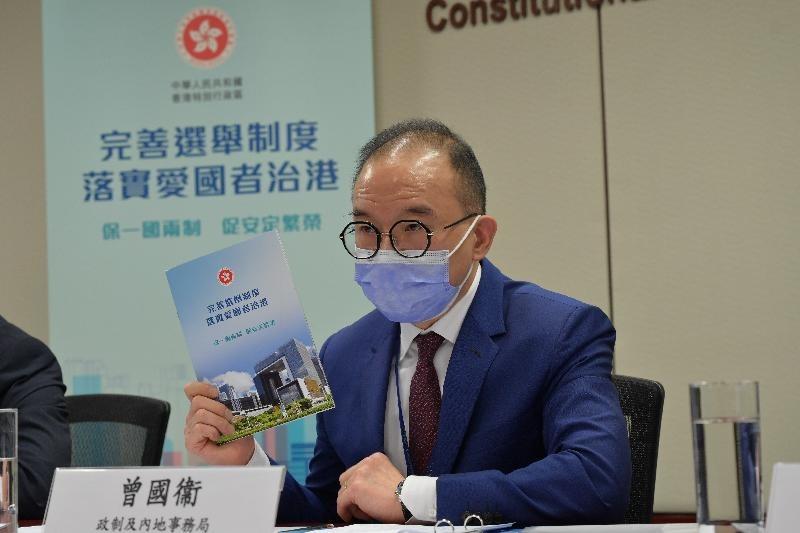 Hong Kong Secretary for Constitutional and Mainland Affairs Erick Tsang Kwok-wai introduces a booklet on the improvements to the electoral system published by the HKSAR government to Hong Kong residents living in the mainland, April 2, 2021. (PHOTO/HKSAR GOVERNMENT)

HONG KONG – The Hong Kong government has pledged to ensure the three upcoming important elections are conducted in a fair, open and honest manner.

He also noted that two new offenses have been introduced under the law to ensure elections are fair. They are corrupt conduct to willfully obstruct or prevent another person from voting at an election and the illegal conduct to incite another person not to vote, to cast a blank or invalid vote by way of public activity during an election period.

The Independent Commission Against Corruption will pay close attention to conduct that may constitute manipulation of or sabotaging the elections, and take resolute law enforcement action to combat such illegal activities, Tsang said.

Since March, the bureau has allocated more than US$16 million on activities to publicize the advantages, the necessity and urgency of improving Hong Kong’s electoral system as well as how the improved electoral system fully implements "patriots administering Hong Kong" and enhances the effectiveness of governance.

Bureau secretaries and department heads have explained the improved electoral system to various sectors in the community through their political platforms, blogs and media interviews.

Tsang noted that various government departments will work closely to formulate an appropriate security plan to deal with possible risks that may occur during the 2021 Legislative Council General Election to be held on Dec 19.

Based on the risk assessments, police will implement appropriate measures and make manpower arrangements in each polling station and its vicinity to enable the poll to be conducted safely, he added.