A world of adventure 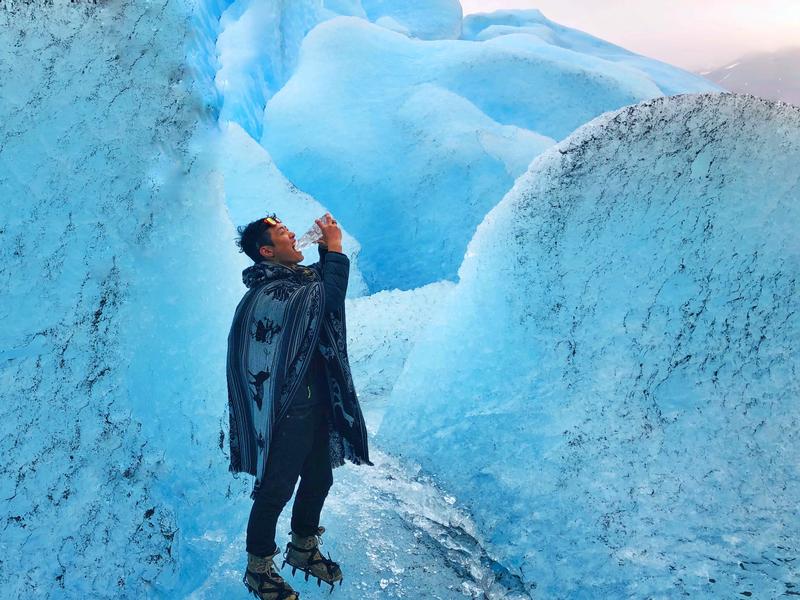 Li Xinyong is a man of the world. He hit the road in 2017, and the pandemic didn't put the brakes on his global ambitions. But first he explored paths closer to home. The 24-year-old, from North China's Shanxi province, went to rural homestays across the country to document their pastoral charm in 2020 and then journeyed to the Tibet and Xinjiang Uygur autonomous regions in recreational vehicles early this year.

It wasn't all work and no play, however, as Li managed to pick up paragliding and diving skills en route.

"They all made me concentrate my mind, which felt incredible," he says, adding that he has a restless and adventurous soul.

After finishing junior middle school at 15, he turned down the opportunity of going to local senior middle school but chose a vocational school far from home in Guangzhou, capital of South China's Guangdong province.

It didn't take long before Li adapted himself to the excitement of big-city life and took full advantage of it.

In addition to finishing school assignments and the arduous task of passing tests over the following five years, he engaged in more than 30 miscellaneous internships and jobs off campus. These included working as a computer salesperson and a Happy Valley theme park performer－donning a ghost costume to scare people in a "haunted house".

In 2014, he even started up his own internet company that helped people train for their target certificates. His business got an angel investment of 1 million yuan (US$155,096), and at its peak, he had more than 30 employees.

"Perhaps I had too much discipline at home with strict parents, I really wanted to follow my instincts, learn things my way as much as possible and see what I could do then," Li says. 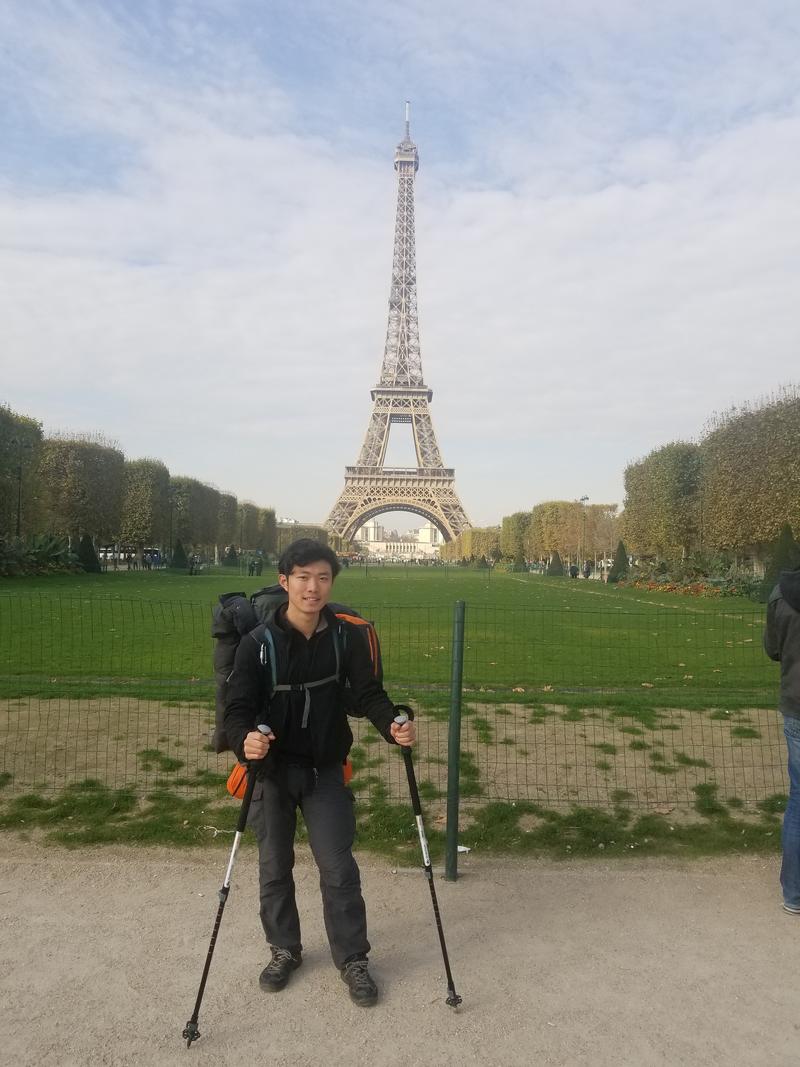 Li arrives in Paris after traveling on foot and hitchhiking from Beijing across Europe, in 2017. (PHOTO PROVIDED TO CHINA DAILY)

However, the business only lasted about a year, and Li attributed its failure to his own immaturity and other limitations.

That was when he decided to take a break and travel around the country, hoping it could bring him some inspiration about what to do next.

He joined an extreme budget travel program, where most of the participants kept costs on the road to a minimum, and accepting offers of lifts and bartering was allowed.

"We could take a free ride offered by drivers going our way, and provide such services as taking photos for a hotel in exchange for a night's accommodation," he explains.

Later, he became a guide on similar budget trips.

"It was mostly about planning routes and taking care of logistics, in case clients couldn't finish their trips," he says.

A turning point came when he met an 18-year-old German on his team－Li was surprised after he learned that his foreign guest came all the way from Germany to China mostly via the help of good-hearted drivers.

It planted in Li the seed of an idea: traveling the world the same way. "I was like, if he can, why can't I?" Li says.

He resisted opposition from his family when he told them about his plan to hitchhike from Beijing, across Europe, to Paris.

The main purpose was to interact with strangers from different backgrounds and understand their customs, way of life and hear interesting anecdotes, Li says. 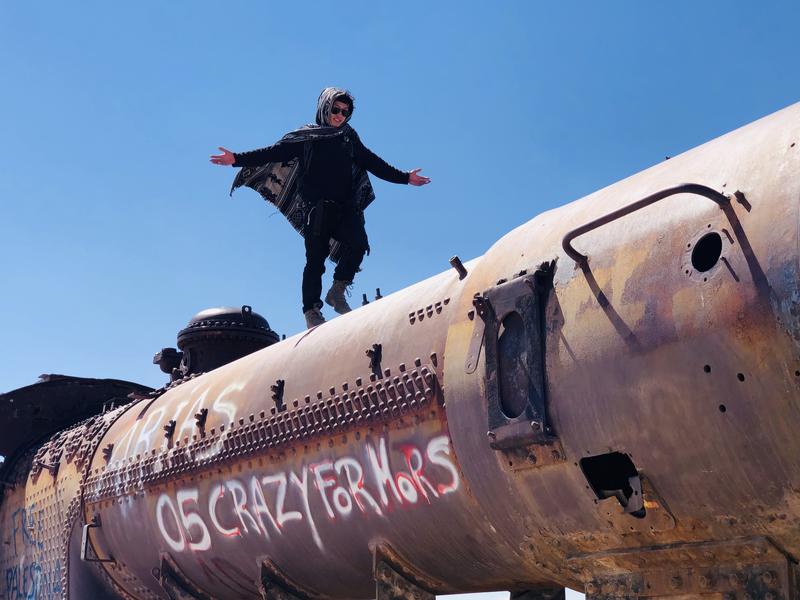 Li stands on a decommissioned train in Uyuni, Bolivia in South America, in 2019. (PHOTO PROVIDED TO CHINA DAILY)

He believed that he could also experience a different side of the world through this method of travel.

Li packed light and printed out hitchhiking signs in the languages of the countries he would travel through, before hitting the road in September 2017.

He spent more than 100 days, and a modest 2,000 yuan, thumbing his way from Beijing to Europe.

Most of the spending was on food and bus fares. When Li reached Mongolia, he was surprised that locals were more than happy to give him a free ride.

"They took me in once I told them I was going to Moscow," he says, adding that people are more likely to help one another in less populated areas.

Li traveled in cars, trucks and even agricultural vehicles over the next 15 days on his journey to Moscow. He set up tents or couch surfed along the way to save money.

He went through Finland, Sweden, Norway, Denmark, Germany, the Netherlands, Belgium and Luxembourg, before finally arriving in Paris on Nov 2, 2017.

Li says he couldn't help but cry when he stood under the soaring Eiffel Tower, and the experience gave him a renewed sense of determination and the ability to persevere in the face of difficulties.

During the trek of more than 13,000 kilometers, Li was stunned by the beauty of the heavy snow in Siberia, as well as the Alps, the romantic Aegean Sea, the tranquil water city of Venice and the ancient Roman ruins.

The destinations more than compensated for the mishaps that happened along the way, including getting trapped in an emergency area of a Swedish expressway for six hours by heavy rain, which soaked his whole luggage and all his documents. At the border between Germany and the Czech Republic, he was robbed while trying to set up a tent under a bridge at night. 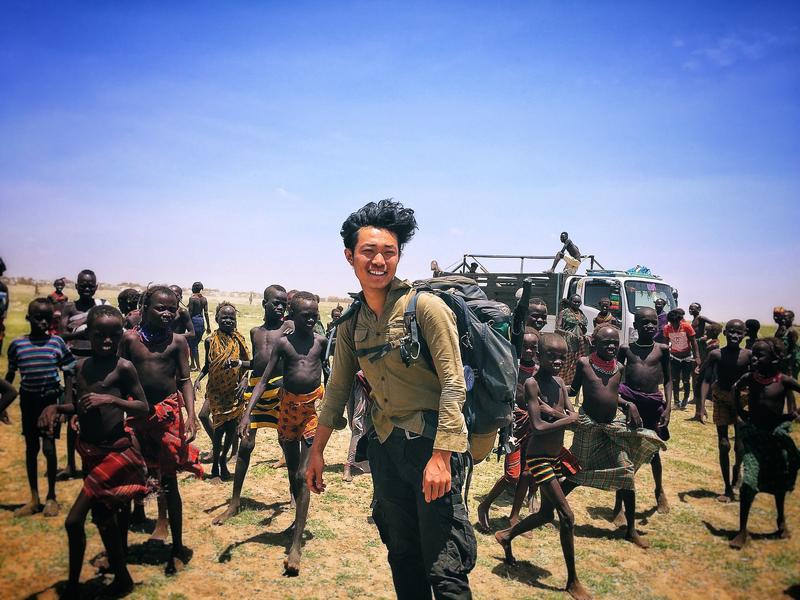 Li meets children in the border area between Ethiopia and Kenya, Africa, in 2018. (PHOTO PROVIDED TO CHINA DAILY)

On the flip side, the generosity of others shone through, such as being invited to see a mining and petrochemical plant by its boss, who gave him a free ride in Mongolia, and being bought bread and coffee by two people in Sweden. In Denmark, a senior official with the UN invited him to his home to join a family gathering.

"All of it was very touching, especially when being in a foreign land," Li says.

Completion of the European tour emboldened him to see the rest of the world the same way.

Just five days after completing his European adventure, he embarked on a trip to explore Africa from Egypt.

It was a tougher prospect than Europe. Li didn't have a phone signal for over 10 days when he was in tribal areas. He also got sea sick on a cargo ship from Tanzania.

Arguably his worst moment came when he had a near miss, after unwittingly setting up a tent on the path of wild elephants.

"The tent was trampled late at night, and my camera, kettle and pot were all smashed," Li says.

For more than half a year, Li experienced the lifestyle of primitive tribes in Africa, saw a spectacular waterfall in Zimbabwe, and enjoyed the grandeur of the African wildness. In Ethiopia, he lived in a chest-high thatched hut and took a boat with local villagers to catch fish at sea and camped in the Sahara desert.

"There is something magical about Africa, which always makes you unknowingly remove your burdens and constraints," Li says, adding that he loved its close contact with nature and the simple and happy lifestyle.

He also used his income from travel writing to buy shoes, snacks and books for African children he met.

Li then went to North America before the pandemic hit, at which time he had achieved about 50 percent of the goal he set in 2018.

During his travels, Li made videos and documentaries and posted them online, attracting 500,000 fans on Douyin, the Chinese version of TikTok, and 900,000 fans on Kuaishou, another video-sharing platform.

Huang Jianle, a high school student in Shenzhen, Guangdong province, has been drawn to Li's adventurous nature and spirit of persistence, following Li for over four years. "I am a big fan and very fond of Li's videos," Huang says, adding that his own experiences have also been enriched through better understanding of the culture, customs, views and gourmet food shared by Li on his travel videos.

Li's endeavors have gradually won over his parents, who went from determined opposition to understanding and supporting.

"It is good to see him mature and develop a strong heart," says his father, Li Shugang, who believes that the difficulties and setbacks during his son's adventures will serve him well in the future.

Speaking about his future plans, Li Xinyong says he would like to drive from the west of Africa to the south, and sail across the island countries of the Caribbean.

"The goal is to gain a wider vision and a better understanding of the world."