Golden girls back on glory trail 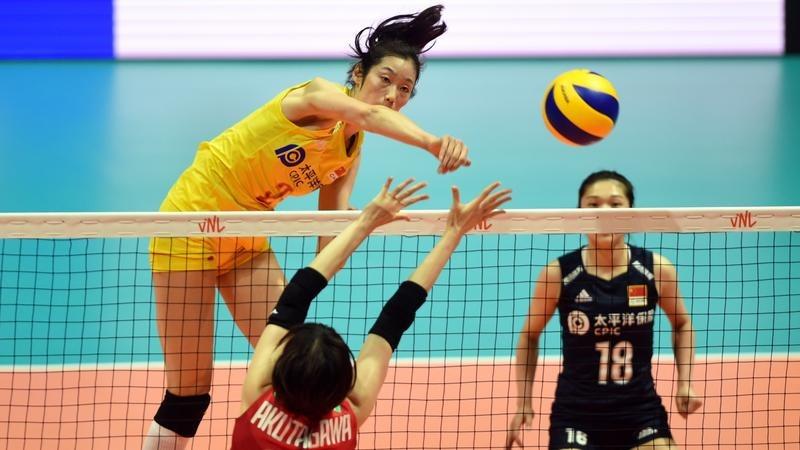 For Team China's women's volleyball players, the target at the Tokyo Olympics is clear－standing on the highest podium once more with gold medals around their necks.

Spearheaded by star spiker Zhu Ting and guided by legendary coach Lang Ping, Team China arrived in Japan on Monday raring to get the defense of its 2016 Rio Olympics title underway after a prolonged preparation period due to the pandemic.

"We are ready. We have been preparing for five years, and now we are excited," 60-year-old Lang told media upon arrival in Tokyo.

"We finally have the chance to start our Olympic journey. I hope we can produce good performances here and win glory for our nation.

"The Olympic Games is different from other tournaments, and each match can be very difficult. But the team will try its best to fight for each point in each game."

Spearheaded by star spiker Zhu Ting and guided by legendary coach Lang Ping, Team China arrived in Japan raring to get the defense of its 2016 Rio Olympics title underway after a prolonged preparation period due to the pandemic

Team China completed its first training session on Tuesday, when Lang told Xinhua that her team is braced for tough challenges ahead.

"Even though some of our players played at the Rio Games and boast a lot of experience, our rivals have also grown over the past five years," said Lang.

"We cannot just copy and paste our pace from the Rio Games, so we need to start everything from zero at the Tokyo Olympics.

"The European teams are more mature now. It's tough for us because we don't have a clear advantage. We need to be prepared for all difficulties. We cannot wait for rivals to attack, we need to be proactive and put them under pressure."

As a serial winner of volleyball's elite honors, captain Zhu－a dominating presence at the net at 1.98 meters tall－remains the team's biggest star.

The 26-year-old is joined in an experienced squad by fellow spikers Zhang Changning, Liu Xiaotong, Li Yingying and Liu Yanhan, middle blockers Yuan Xinyue, Wang Yuanyuan and Yan Ni, and setters Yao Di and Ding Xia. Wang Mengjie will play as the libero, while the opposite hitter is Gong Xiangyu.

"The coaching team has been considering the Olympic roster for a long time. We needed to select players who can combine well with each other in Tokyo," said coach Lang before departing for the Games.

"We have been closely monitoring the condition of all the players, especially considering we hadn't played any international tournaments for nearly two years due to the COVID-19 pandemic.

"We paid particular attention to those who had played fewer matches, so we know if they have enough ability to improvise and if they can cooperate well with the veterans.

"During our preparation, we experimented with substitutes playing with the core players. And we conducted a lot of statistical analysis of each day's training. But of course, we didn't just focus on the numbers."

The year 2020 presented unprecedented challenges to Lang's squad. With international tournaments canceled due to the pandemic, Team China attempted to stay sharp as best it could in training.

Last month the long wait for competitive action ended when Lang's squad participated in the Volleyball Nations League in Rimini, Italy. Missing key players in the early stages, China got off to shaky start, before racking up six straight wins when the first-choice players returned to the court.

Despite failing to make the semifinals, the tournament served as a vital tuneup for Tokyo, with victories over Brazil, Italy, the Netherlands and the United States boding well for the title defense.

Team China will open its Olympic campaign against Turkey on Sunday before taking on the US two days later. China's Group B rivals also include Russia, Italy and Argentina.

Lang's squad is currently ranked third in the world, behind the US and Brazil.

As the team's inspirational leader, Zhu has long been a household name in China. Following her heroics in Rio, where she was named MVP of the tournament, Zhu joined Turkish club VakifBank to become one of the world's highest-paid volleyball players. She won a host of major honors in Europe before returning to China to play for Tianjin in 2019. Now, Zhu is confident she can once again wow the world on the biggest stage.

"The big match is coming, and we need to stay calm. We will try our best and our goal is to raise the national flag and let the national anthem be played in the stadium in Tokyo," said Zhu, who along with taekwondo athlete Zhao Shuai will be China's flag-bearers at the opening ceremony.

"Being chosen as the flag-bearer is a great honor and it shows the Chinese delegation's trust in the women's volleyball team and myself. That's an honor, and it's also a responsibility, which motivates me to try harder each day and take each step forward correctly."

Like Zhu, Zhang Changning has also won the nation's hearts, with the 24-year-old something of a superstar on social media. It's clear, though, that Zhang first and foremost craves victories, not the spotlight.

"Instead of myself, I just want the team to be trending news on social media more often," Zhang said before flying to Tokyo.

"Before, I just played a supportive role on court, and didn't think too much about shouldering too much responsibility. However, in Italy last month, I felt more comfortable taking on more responsibilities, and I really cherish that feeling. I hope the experience I gained in Italy will help me in Tokyo."

China's production line of elite volleyball talent shows no signs of slowing down, with youngsters like Li Yingying seizing their chance to shine on the biggest stages.

"Yingying's game has been developing very fast in recent years. We are really glad to see we have more firepower in our attack line. She's a sort of secret weapon for us," said Lang. "I hope with the help of the veterans, Yingying can enjoy the Olympics and show her potential."

Held in the very highest esteem by the nation's sports fans, the squad is being inundated by messages of support, on and offline, in the leadup to the Games.

Among the well-wishers is former national team head coach Chen Zhonghe, who led China to gold at the 2004 Athens Olympics.

"The strength of our women's volleyball team is strong now, and I think they are even stronger than the Rio Olympics. So, I'm very confident that our team can defend the title in Tokyo," Chen told Chinanews.com.

"Players like Zhu Ting are very experienced now. We encountered many setbacks the last time we won Olympic gold. In that final, I think our players delivered a great performance, with a great mentality. This time they are even stronger. But to win this time, we need to overcome many difficulties to eventually stand on the highest podium."