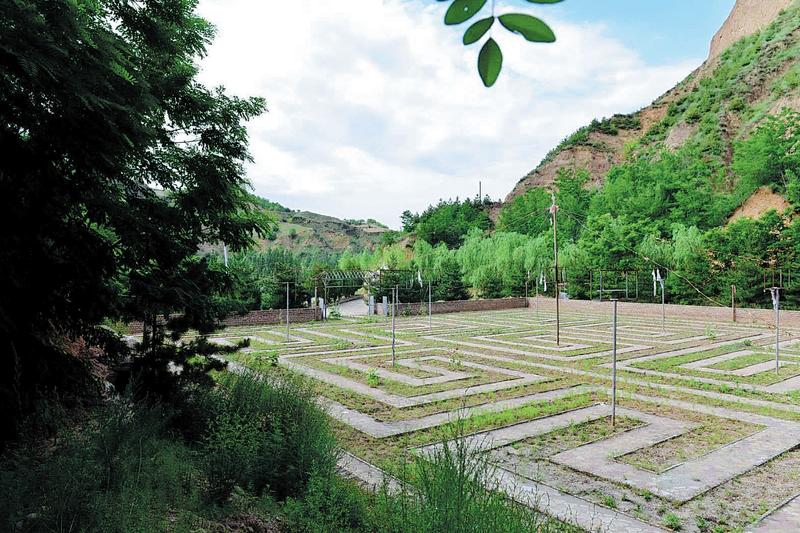 The Jiuqu Yellow River array formed by grass on the ground in Songjia gully in Xingxian county, Shanxi province, where nearby people gather to celebrate Lantern Festival as a traditional folk activity. (PHOTO PROVIDED TO CHINA DAILY)

Ideas and passions can take root in the smallest of gestures. Like the planting of a walnut tree, for instance.

Gao Huachu still remembers one being planted in his hometown Shuijiangtou village, Xingxian county, North China's Shanxi province, when he was young, by Gao Houjiu, a member of the Communist Party of China. Because of his respect for Gao Houjiu, he often took care of the tree after school, and listened to Gao Houjiu's words about the benefits of planting trees.

"He said it would be great if walnut trees could be planted all over our village. That way, the environment would get better, and we would gain economic benefits and free people from starvation," recalls Gao Huachu.

Located on the Loess Plateau, in an area with poor soil, Gao Huachu's hometown had few trees. But Gao Houjiu's words planted a seed in Gao Huachu's heart, which spurred him to not only realize Gao Houjiu's wish years later, but also devote his whole life to planting trees.

Gao Huachu was born into a poor farmers' family in 1950 on the Lyuliang Mountain. After graduating from junior high school, he began to work in Shuijiangtou village, and assumed the position of Party secretary of the village in 1971.

"At that time, villagers were extremely poor with little income from farming. Many of them resorted to robbery, stealing and gambling," says Gao Huachu. 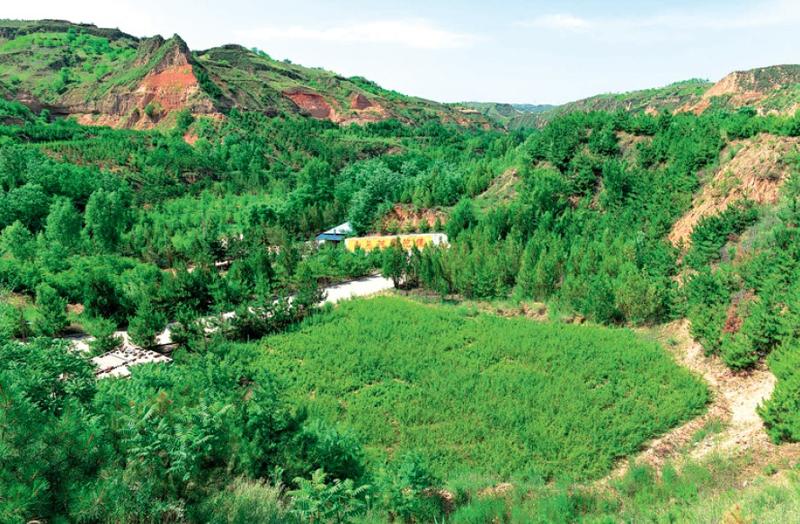 A bird's-eye view of Songjia gully, a deserted gully turned into an ecological park by Gao Huachu. (PHOTO PROVIDED TO CHINA DAILY)

The young Party secretary decided to change the situation, and with Gao Houjiu's wise words echoing in his ears, he encouraged villagers to plant walnut trees.

"Considering that walnut trees can be planted in the village, and can bring good economic benefits, we invited professionals to our village to teach us how to plant and care for them," says Gao Huachu.

Over the next six years, Gao Huachu led the whole village of over 460 people to embark on a journey of development. They planted 140 hectares of walnut trees, the produce of which later enabled them to build roads, get access to electricity, and construct a green village.

In 2000, when he was about to retire as deputy director of Xingxian county's forestry bureau, local government issued a policy calling on people to take responsibility of controlling some small watershed in order to conserve water and soil. Gao Huachu wanted to answer the call and so he rented a deserted gully, covering over 320 hectares, to develop by planting trees there.

"After retirement, I wanted to do something, but I didn't like mahjong, poker or singing and dancing. My hobby was planting trees, and local government was appealing to people to do it, so why not answer the call?" says Gao Huachu.

He chose Songjia gully, one not far from his hometown which he used to pass by on his way to school as a child, even though he knew it would be taxing.

"The gully was full of stones, with a few patches of sandy soil not suitable for growing plants. What's worse, people usually grazed their cows and sheep in the gully, so the small amount of foliage grown in spring did not last long," says Gao Huachu. 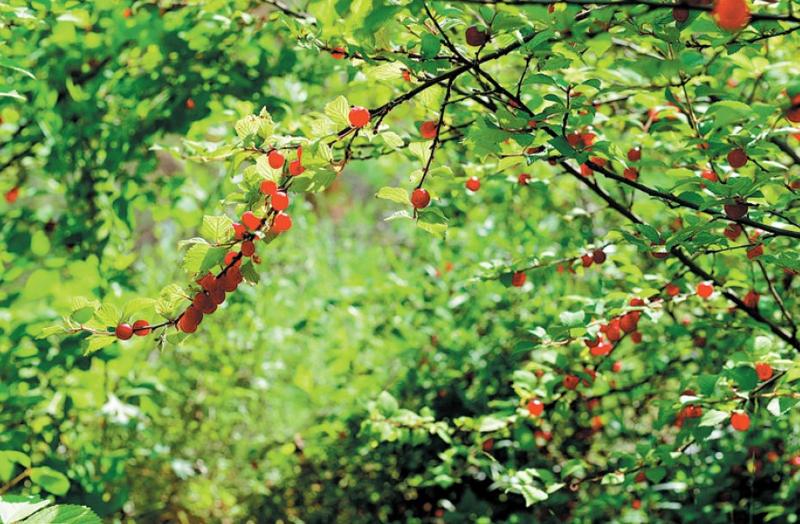 Cherries planted in the gully. (PHOTO PROVIDED TO CHINA DAILY)

Despite these difficulties, he spent 20,000 yuan (US$2,900) on a 50-year lease for the gully and recruited people to build dams at strategic points so that, when heavy rain cascades down the mountainside, the sand and soil that it brings with it are retained by the dam. He then uses this fertile base to grow plants and trees.

The major difficulty was money. Because developing the deserted gully required a lot of investment, but profit is generated slowly, and can be easily influenced by uncertain factors like the weather, Gao Huachu had to spend all his family's money, even selling his house and the gifts he had prepared for his son's wedding to make ends meet.

Over the years, he has planted more than 100,000 trees in the deserted gully, cultivated more than 500,000 nursery-grown plants, built a 40-hectare farmland in the gully, and changed the whole area into an ecological park. His efforts and initial sacrifices have paid off as his nursery-grown plants have sold well. Several years ago, he sold 500 Chinese pines for 1,000 yuan each to Beijing and Xiong'an New Area in Hebei province.

He has helped the local poverty alleviation effort by recruiting 10 people from poor households to carry out regular work in the gully. "Over the past 20 years, I have recruited those who have difficulty supporting themselves for seven to eight months each year to do some easy work like weeding. Each of them can earn more than 10,000 yuan a year," says Gao Huachu. 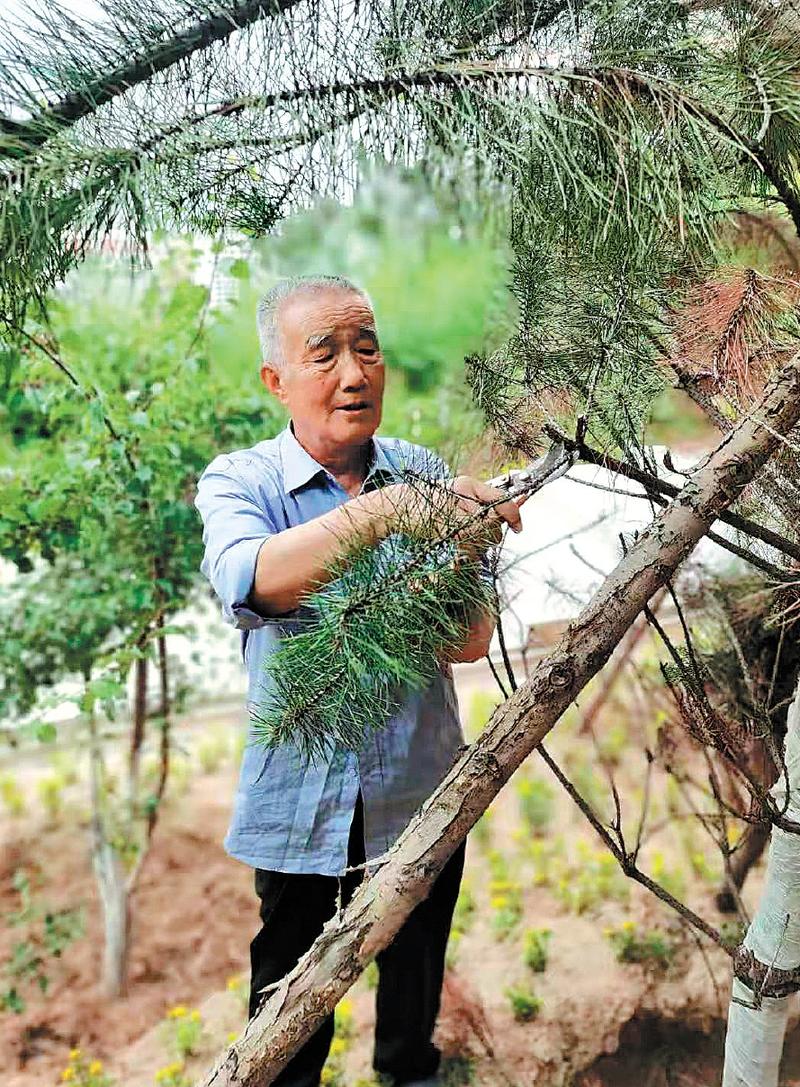 He also added cultural elements to the gully, establishing a grove of stone tablets to commemorate famous people in the county's history, a Jiuqu Yellow River array formed by grass where nearby people gather to celebrate Lantern Festival as a traditional folk activity and an educational base for a local school where students can learn to grow grains.

"I was afraid that no one would take care of the trees when I die, so I added the cultural elements to the gully so that it will be inherited by others, and they will protect the trees as well," says Gao Huachu.

Bai Jinying, an official at Xingxian county's forestry bureau who has been going to Songjia gully to offer technological support to Gao Huachu since 2002, says, "Gao Huachu loves forestry, and has devoted all his effort to planting trees in the previously deserted gully. The policy 20 years ago called on many people to do similar things, but most of them gave up halfway through. Only Gao Huachu could persist with the cause for more than two decades."

Since he is getting old, the man who just received a medal marking his 50 years of Party membership wants to donate the ecological park to the government.

"Individual strength is limited. I have tried my best, and I hope the gully will develop further and benefit future generations when it is owned by the government," says Gao Huachu.