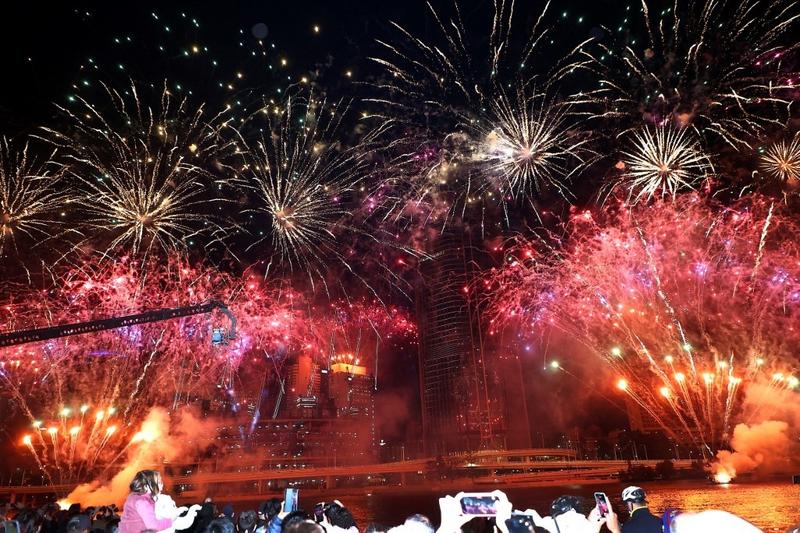 CANBERRA - Brisbane has been chosen to host the 2032 Olympic and Paralympic Games, which will mark the third time that the sports gala comes to Australia.

The International Olympic Committee (IOC) announced on Wednesday night in Tokyo that its 72 members had selected Brisbane, the capital of the state of Queensland in northeast Australia, to host the Summer Olympics from July 23 to August 8, 2032.

It will make Brisbane the third Australian city and just the fourth in the Southern Hemisphere to host the grand sports event after Melbourne in 1956, Sydney in 2000 and Rio de Janeiro in 2016.

With a population of approximately 2.4 million Brisbane will also become one of the smallest cities to host the Summer games.

The International Olympic Committee announced in Tokyo that its 72 members had selected Brisbane, the capital of the state of Queensland in northeast Australia, to host the Summer Olympics from July 23 to August 8, 2032

Brisbane's pitch to the IOC drew heavily on the success of the Sydney games in 2000.

"To this day, Australians recount to their children stories of their proudest Sydney 2000 Olympic and Paralympic Games moments, hopeful that these young people will have their opportunity of a lifetime in 2032," the official 92-page pitch document said.

"This is the greatest legacy of the Olympic and Paralympic Games. We aspire to be entrusted as worthy hosts again in 2032."

Brisbane's success has appeared certain since February when the IOC's executive board voted to name it the preferred candidate city for the Games.

Kristin Kloster Aasen, the Chair of the Future Host Summer Commission, said at the time that Brisbane was chosen over other interested cities because of its past experience hosting elite-level sporting events.

"The high level of expertise in hosting major international sports events, the favorable climate conditions in July and August," she said. "The existing and planned transport infrastructure and experience in traffic management which can adequately meet the demands of the Olympic Games and were successfully implemented for the Commonwealth Games in 2018."

In the end Brisbane was chosen unopposed to host the games for the first time in history after bids from other interested cities including St Petersburg, Doha, Jakarta, New Delhi, Istanbul and Budapest failed to advance to IOC board approval.

Brisbane is the first host selected under the new approach of Olympic host election.

"This new approach is lighter, more collaborative, more compact, and has a positive impact," said Bach. "Now we always have a significant pool of Interested Parties for 2036, and even for 2040, which is almost 20 years from now. I can't remember that we have ever been in such a favourable position 20 years before an Olympic Games."

The rising cost of hosting the Olympics rises has weighed heavily on the hosts and the countries bidding for Olympics.

The Japanese Government is expected to spend US$15.4 billion on holding the games - more than twice as much as the 7.3 billion USD it forecast in 2013.

Between 2015 and 2017 the governments of Italy, Germany and Hungary withdrew separate bids for Rome, Hamburg and Budapest to host the 2024 Olympics.

However, Queensland Premier Annastacia Palaszczuk - whose Labor Party was re-elected for a third consecutive term in government in October 2020 - has promised to buck the trend and deliver the cheapest Olympic Games in a generation.

The proposed budget includes 690 million AUD (US$503.2 million) for new and existing venues.

Under the hosting plan, at least 31 existing or temporary facilities and four new community centers will be used for events at the 2032 Games.

The biggest spending will be on Sports and Games operations, with 1.05 billion AUD (US$765.9 million) - 21 percent of the budget - slated for food, medical support and transport for an estimated 11,000 athletes and officials.

Athletes will be housed at an average travel time of 19 minutes from venues, with villages in Brisbane, the Gold Coast, the Sunshine Coast and Wyaralong.