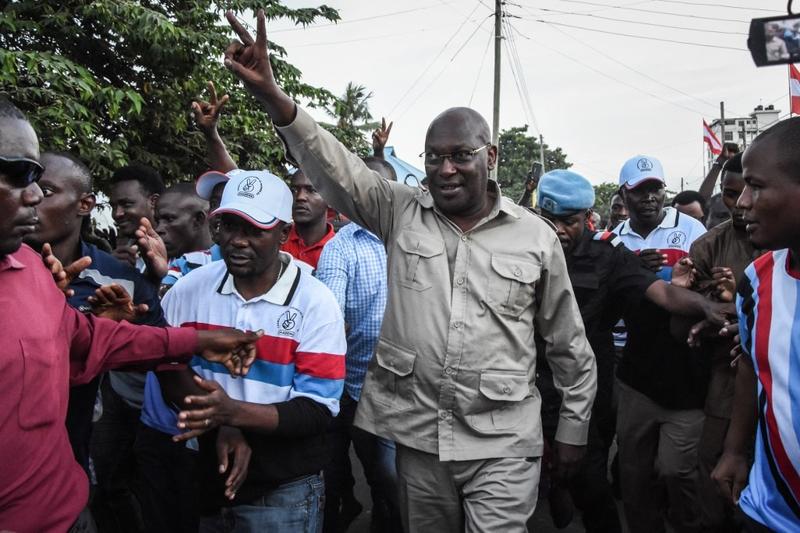 In this March 14, 2020 photo, Tanzania's Chadema Party chairman Freeman Mbowe (center) gestures as he arrives at the party's headquarters after being released from Segerea Prison in Dar es Salaam. (ERICKY BONIPHACE / AFP)

NAIROBI - Tanzania’s main opposition party said on Wednesday its leader had been arrested with ten other party figures, in what it called proof that President Samia Suluhu Hassan was persisting with the authoritarianism of her late predecessor John Magufuli.

The Chadema party said leader Freeman Mbowe and the others had been detained before dawn at a hotel in the lakeside city of Mwanza, where they had been planning to hold a meeting later on Wednesday to discuss proposals for a new constitution.

The arrests followed the detention of dozens of other party members last week for holding a meeting without permission.

The Mwanza region’s police commander and the regional commissioner both did not immediately respond to calls and messages seeking comment. On Tuesday regional commissioner Robert Gabriel had told reporters that gatherings without government permission were banned in line with policies introduced since Hassan took office to curb COVID-19.

“We are condemning this violation of human rights for Tanzanians and this is a sign that the dictatorship that was prevailing during President Magufuli’s administration is still persisting,” Chadema said in a statement published on its Twitter page.

Chadema’s former presidential candidate, Tundu Lissu, who lives in self-imposed exile in Europe, tweeted that Hassan’s rise following Magufuli’s death in March had brought “hope that Magufuli’s reign of terror and war on democracy would end.

“Last night’s arrest of Chairman Mbowe and CHADEMA leaders has dashed any such hope. It’s now time for nationwide protests and international isolation of her regime.”

Chadema has proposed changing the constitution, which it says this is necessary to protect democracy following the rule of Magufuli. Hassan, of the ruling Chama Cha Mapinduzi party, had served as Magufuli’s vice president before succeeding him when he died in March of what the government called a heart condition but opponents suspect may have been COVID-19.

Chadema said it had no information on where Mbowe was being held, while the other party figures were detained at Mwanza’s central police station.

Chadema had announced plans to hold a meeting in Mwanza, on Lake Victoria, on Wednesday, and said all attendees would observe health guidelines to curb the spread of COVID-19.

On Monday, Mbowe had told a news conference: “If they want to arrest Chadema supporters due to the constitution issues, let them expand their prisons. We are ready to be arrested and we will not seek bail.”

Magufuli had been Africa's most prominent COVID-19 sceptic, dismissing the virus as harmless, resisting any restrictions to halt its spread and rejecting vaccines.