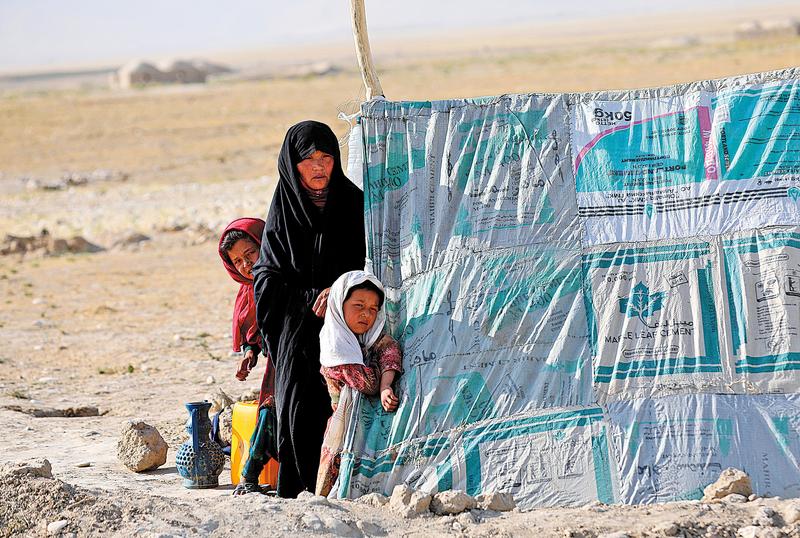 An Afghan woman stands by a makeshift tent with her children in a camp at the edge of the city of Mazar-e-Sharif, northern Afghanistan, on July 8. (RAHMAT GUL / AP)

China has called on members of the Shanghai Cooperation Organisation to work to prevent the United States from shirking its responsibilities to countries in the Central and Western Asian region arising from Washington’s policy actions.

In a special meeting on Afghanistan, State Councilor and Foreign Minister Wang Yi said the SCO members should prompt the US to “fulfill its pledges, increase dedication to the issue, and should beware of the plot to sabotage regional security through Afghanistan’s turmoil”.

Representatives of the other SCO members voiced concerns over the turmoil triggered by the US military’s retreat from Afghanistan, and they stated the need to be alert against any resurgence in terrorism in the war-torn country.

The SCO representatives called for steadfast progress to be made toward a political settlement of the Afghan conflict.

They also voiced support for a return to peace in the country and efforts to promote economic growth. The meeting heard calls for a crackdown on terrorism and the “three evil forces” of terrorism, separatism and extremism, as well as terrorist forces as confirmed by the United Nations Security Council, including the “East Turkestan Islamic Movement”.

The SCO members should prevent the “three evil forces” from penetrating and spreading into Afghanistan’s neighborhood, step up mediation efforts for an early reconciliation, and support the country’s self-reliance, independence and sustained development, Wang said.

In Turkmenistan, on the first leg of Wang’s trip to the region, the country’s President Gurbanguly Berdymukhamedov told Wang on July 13 that Afghanistan’s neighbors should play a greater role in the Afghanistan issue, and his country is ready to enhance communication and coordination with China to this end.

China is willing to host negotiations at an appropriate time attended by dignitaries from within the Afghan nation, Wang added. China expects Afghanistan to make a broad and inclusive power arrangement, pursue a steady and sound policy toward Muslims, resolutely fight all types of terrorism and extremist thoughts, and commit to friendly relations with all its neighbors, Wang said.

China supports all efforts conducive to achieving these goals, and is willing to communicate and coordinate with all parties, conduct diplomatic mediation and provide necessary convenience for this purpose, Wang added. He made the remarks at a joint press meeting with Tajik Foreign Minister Sirojiddin Muhriddin on July 13.

Wang named three tasks of top priority, the first of which is to prevent warfare in Afghanistan from expanding and to avert a full-scale civil war.

Internal negotiations within the Afghan nation should be restarted as soon as possible to achieve a political reconciliation, he said.

Finally, all kinds of terrorist forces should be prevented from taking advantage of the situation to grow significantly in Afghanistan, and the country should not become a place for terrorists to gather again, Wang added.

China “always respects the sovereignty, independence and territorial integrity of Afghanistan”, and it honors its principle of noninterference in Afghanistan’s internal affairs, Wang said.

During Wang’s talks with Muhriddin later that day, China and Tajikistan agreed to coordinate responses to the changing situation in Afghanistan, stabilize the Tajikistan-Afghanistan border, fight terrorism and prevent external forces from stirring up Central Asia.

At the joint news conference with Muhriddin on July 13, Wang was asked about Washington’s recently announced plan to conclude its military operations in Afghanistan on Aug 31.

When the US army withdraws its troops, Washington should reflect on its role in the country and “consider how to fulfill its due obligations for the reconciliation and reconstruction of Afghanistan”, Wang said.

He said the Afghan government “deserves a fair evaluation” because it has done much work through the years to maintain national unity, social stability and improve people’s livelihoods.

Wang called on the Taliban in Afghanistan to “draw a clear line with all terrorist forces” and return to the mainstream of Afghan politics in a manner that shows its responsibility to the Afghan people.

The Taliban, with its control of a large armed force in Afghanistan, “should be aware of the responsibility it bears to the country and the nation”, Wang said.

The US withdrawal from Afghanistan — unfolding without careful consideration to the impact on security in the war-torn country — could leave behind more chaos, analysts have said.

US President Joe Biden in April ordered a complete withdrawal of the country’s troops from Afghanistan by Sept 11, the 20th anniversary of the terrorist attacks on New York and Washington that precipitated the US’ so-called war on terror.

With more than 90 percent of the withdrawal completed, Biden said that the mission was set to conclude by Aug 31, more than one week ahead of the deadline.

For the US, the view is that a 20-year war is coming to an end. But for Afghanistan, the irresponsible withdrawal of the US military has left a huge “security hole” that is hard to fill, said Zhang Bo, a researcher from the Institute of West Asian and African Studies at the Chinese Academy of Social Sciences.

“If there is no proper arrangement, the irresponsible withdrawal of the US troops is likely to lead to the situation of Iraq in Afghanistan,” said the scholar, referring to the deterioration in Iraq’s security after the withdrawal of US forces.

The security vacuum left by the withdrawal in Afghanistan could provide the conditions for the development of extremist organizations, such as the Islamic State, Zhang said.

With no agreement in sight from multiparty peace talks, Afghanistan may “once again fall into a long-term civil war”, leading to more refugees and a worsening of other humanitarian problems, the scholar added.

The US departure from Afghanistan is a major milestone with considerable implications for the future of that country and the region as whole, said Salman Bashir, former foreign secretary of Pakistan and former ambassador to China.

The withdrawal signifies “a diminishing interest and less inclination on the part of the US to invest resources on issues that have become peripheral to US national interests”, he noted.

“For some forty years, Afghanistan was center stage in geostrategic struggles of global significance — first as the last hot front of the Cold War and then the war on terror,” said Bashir, who was also the high commissioner of Pakistan to India. “Principally it has been a victim of international politics and its geography.”

The US termed its mission in Afghanistan a defensive maneuver against terrorists, and the mission was supposed to bring peace to Afghanistan and help the Afghans establish a stable society.

However, the most conservative estimates by local and international rights groups suggest that close to 47,600 civilians have been killed and more than double that number injured in Afghanistan during the 20 years of war, according to figures from the Watson Institute of International and Public Affairs at Brown University.

Taliban militants have also been more active since the withdrawal of the US troops at the beginning of May, resulting in the deteriorating security situation in Afghanistan.

According to a Taliban source, the group now controls 85 percent of Afghanistan’s territory, or more than 170 districts.

The Afghan government’s security forces are fighting back against the Taliban.

At least 40 Taliban militants were killed in multiple airstrikes launched by the Afghan Air Force on July 11, the country’s Ministry of Defense said on July 12.

An article published by the Gulf News on July 8 said the US’ involvement in Afghanistan has “brought nothing but destruction and chaos to region”, and the bitter legacy “will be felt for decades to follow”.