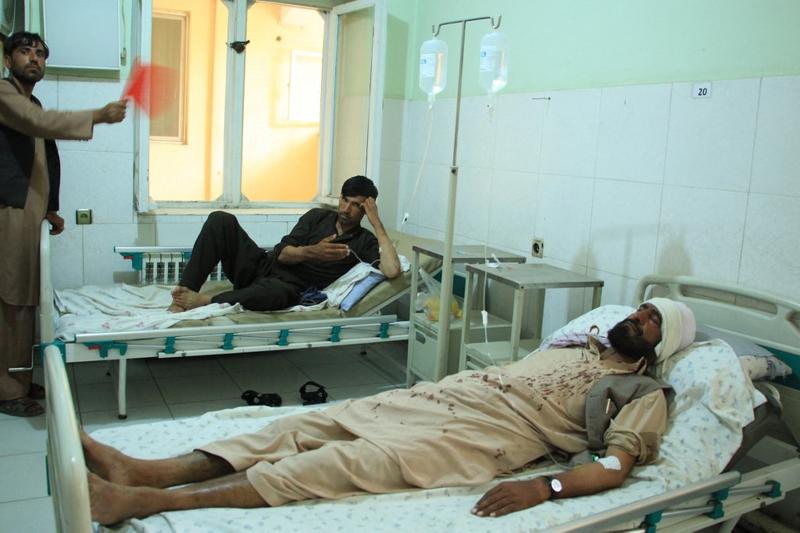 Wounded people receive treatments at a hospital following an attack by masked gunmen which killed 10 people working for the HALO Trust mine-clearing organization, at Pol-e-Khomri in Baghlan province, Afghanistan on June 9, 2021. (AFP)

Gunmen shot dead 10 Afghans working for the international demining organization the Halo Trust in an attack on their camp in the north of the country, Halo said on Wednesday.

Halo did not attribute blame for Tuesday's attack, saying only that an "unknown armed group" carried it out. Afghan officials blamed it on Taliban insurgents.

The insurgents, fighting to overthrow Afghanistan's foreign-backed government, denied involvement in the attack on the camp in the northern province of Baghlan, where fighting has been heavy in recent weeks.

A Taliban spokesman denied involvement in the killings. But a senior government official in the capital Kabul dismissed that, saying: "This was clearly execution by the Taliban."

"The Taliban brought them into one room and opened fire on them," provincial police spokesman Jawed Basharat said.

The Halo Trust, the largest de-mining organization in Afghanistan, said in a statement that unidentified gunmen attacked the camp and killed 10 of its staff.

It said 16 people were wounded. There were 110 workers at the camp at the time of the attack, it said.

After decades of conflict, Afghanistan is strewn with mines and unexploded ordnance and agencies have been working to clear them in the years since the Taliban were ousted in 2001.

An official in the area said most of the surviving workers fled to nearby villages after the attack and police were working to help them.

A Taliban spokesman denied involvement in the killings. But a senior government official in the capital Kabul dismissed that, saying: "This was clearly execution by the Taliban."

The Taliban often attack demining workers because, government officials say, the workers often help to defuse roadside bombs that the insurgents have planted.

Violence has increased across Afghanistan since the United States announced plans in April to pull out all of its troops by Sept 11.

The Taliban are fighting government troops in 26 out of 34 provinces, and the insurgents have recently captured more than 10 districts, government officials say.