EU, UK see AstraZeneca clot link, back use despite ‘rare side effect’ 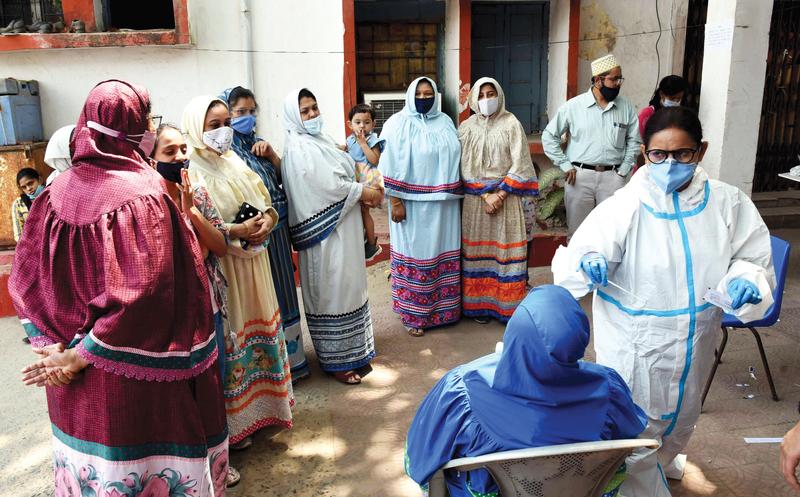 People line up for COVID-19 testing in Patna, capital of the state of Bihar in India, on April 6, as the country faces a wave of new cases. (PHOTO / XINHUA)

While the world cries for more vaccines amid further spread of COVID-19, officials of the European Union and the United Kingdom concluded that benefits from the Oxford/AstraZeneca vaccine “outweigh any risks” despite its “casual links” to blood clot side effects.

People under the age of 30 in the UK will be offered an alternative to the Oxford/AstraZeneca COVID-19 vaccine due to a rare blood clot risk, in what the government’s vaccination advisory body describes as a “course correction” in its clinical advice.

The European Medicines Agency, or EMA, also updated its advice for the Oxford/AstraZeneca vaccine on April 7, saying that the clots should be listed as a “rare side effect”.

In news briefings, both the UK joint committee on vaccines and immunization, or JCVI, and the EMA confirmed their existing advice that the jab is safe and “the vaccine benefits outweigh any risks”.

JCVI chairman Wei Shen said the clinical advice to swap vaccines for younger age groups was “really out of the utmost caution” rather than “any serious safety concerns”.

He said people who have already had a first dose of the Oxford jab should still take a second dose when offered one.

A review by the EMA’s safety committee concluded that “unusual blood clots with low blood platelets should be listed as very rare side-effects” of the vaccine.

The World Health Organization’s Global Advisory Committee on Vaccine Safety, in an interim statement, said that the events under assessment were very rare, with low numbers reported among the almost 200 million individuals who have received the AstraZeneca vaccine around the world.

Indonesian President Joko Widodo has slammed richer nations for vaccine nationalism that is hampering the world’s supply of COVID-19 vaccines and prolonging the global pandemic.

“We must give vaccine access to all countries,” Jokowi, as the Indonesian leader is known, said in an interview on April 7. “Poor countries, developing countries, developed countries must be given equal treatment. If not, the pandemic will not end.”

While nearly 700 million doses have been administered worldwide, the vast majority of them went to people in richer countries and vaccine-producing nations. The EU has sought to block shipments, while countries like the United States and the UK secured orders for more doses than their entire population needs.

India’s fight against a renewed wave of coronavirus infections is beset by vaccine shortages in several states and cities including the financial capital, Mumbai.

The nation’s worst-hit state, Maharashtra, has only three days’ worth of vaccines in stock, Health Minister Rajesh Tope told reporters on April 7, even as the country reported a record of over 115,736 daily new cases.

In Brazil, the health regulators said on April 7 they would not limit the use of AstraZeneca’s COVID-19 shot, saying that the benefits outweigh the risks.

Health authorities fear a virus variant is unleashing a fourth wave of infections just 107 days before the Tokyo Olympics begin, with a vaccination drive still at an early stage.

In South Korea, the Korea Disease Control and Prevention Agency reported on April 8 more than 700 new cases, which brought the national caseload to 107,598, including 1,758 deaths. The daily jump was the highest since Jan 5, when 714 cases were reported.

Agencies contributed to this story.