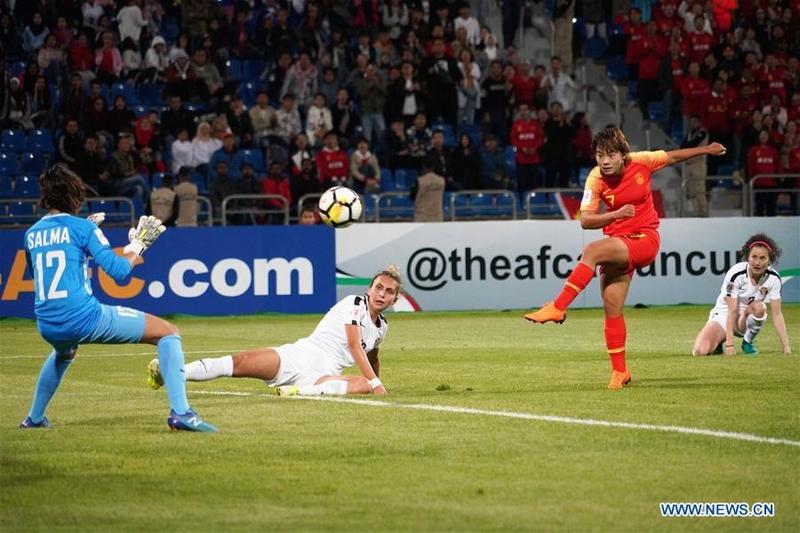 China's Wang Shuang (2nd right) kicks the ball during the Group A match between China and Jordan at the 2018 AFC Women's Asian Cup in Amman, Jordan, April 12, 2018. (LIN XIAOWEI / XINHUA)

The Asian Football Confederation (AFC) plans to launch a women’s Champions League in 2023 to further boost the women’s game across the continent, the continental governing body said on Wednesday.

The AFC in 2019 organized the pilot Women’s Club Championship with four sides from Australia, China, Japan and South Korea competing in a round-robin format, laying the groundwork for a future Women’s Champions League.

While the men’s game in Asia often lags behind the leading nations in Europe and South America, the continent remains one of the leaders on the women’s side of the sport

Two more editions of the Club Championship are being planned before the launch of the Champions League in 2023.

“The AFC organised the Women’s Club Championship - FIFA/AFC Pilot Tournament in South Korea in 2019 with clear ambitions to transition towards staging the Women’s Champions League,” the governing body said in a statement.

“In 2020, the AFC commenced an extensive survey among its 47 Member Associations (MAs) to better understand the current status of women’s domestic club competitions...with the view of launching a Continental Women’s Club Competition that is beneficial to all MAs.

“Looking ahead, the AFC is also planning to organise another two pilot editions of the Women’s Club Championship. Based on the experience...the AFC will decide the format and calendar for the Women’s Champions League in 2023, which will be announced in due course.”

While the men’s game in Asia often lags behind the leading nations in Europe and South America, the continent remains one of the leaders on the women’s side of the sport.

Japan won the Women’s World Cup in 2011, with China having previously reached the final in 1999, while teams from the east of the continent have also won titles at the FIFA Under-17 and Under-20 editions of the quadrennial tournament.

The 2019 Women’s World Cup in France, however, was the first time no Asian team reached the quarter-finals since the tournament’s inception in 1991.