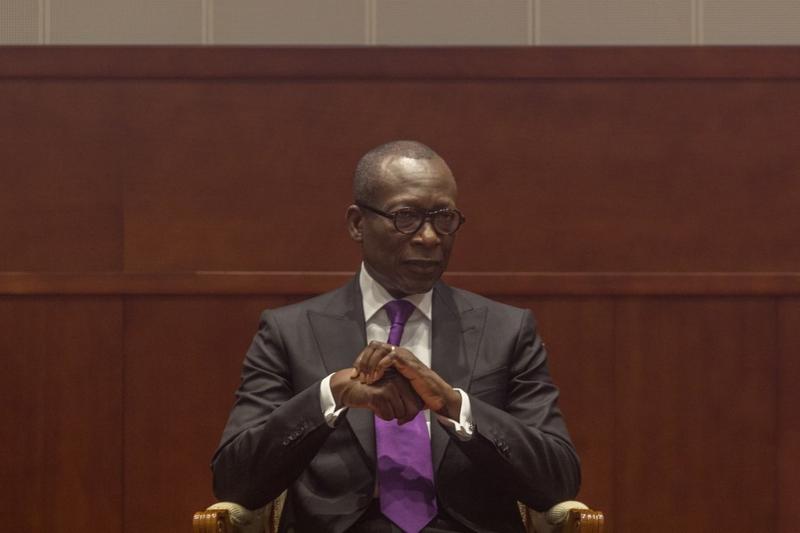 In this photo taken on Oct 10, 2019 Benin President Patrice Talon is seen during the opening session of the National Political Dialogue in Cotonou. (PHOTO / AFP)

COTONOU - Benin’s President Patrice Talon, who previously vowed to serve only one term, enters Sunday’s election a heavy favorite to win five more years in office amid criticism he has tarnished the country’s reputation as one of West Africa’s model democracies.

Talon, a multi-millionaire cotton magnate, faces two challengers, but analysts say he has prevented his strongest rivals from running by driving them into exile under the threat of criminal charges.

His U-turn about a second term, which he pledged as a candidate in 2016 to forgo in order to avoid “complacency”, has led to protests in the country of 12 million. Hundreds marched and burned tyres on Tuesday in several cities.

Talon says he needs another term to consolidate the gains of his first. He has defended the legal charges brought against his rivals as justified by their acts.

Patrice Talon, a multi-millionaire cotton magnate, faces two challengers, but analysts say he has prevented his strongest rivals from running by driving them into exile under the threat of criminal charges

ALSO READ: Africa can learn from others on reopening economies

“I will be a candidate to strengthen this good governance that we have just acquired, and which allows us to start building up our country,” he said recently during a tour of southern Benin.

A business-minded reformer who pushed to digitise government services, Talon has campaigned on his economic record.

But his critics accuse him of undermining democratic progress after his predecessor Thomas Boni Yayi stepped down when his two terms ended in 2016, distinguishing Benin from other African presidents who revised constitutions to stay in power.

In 2018, Talon pushed through electoral reforms that disqualified all opposition parties from running the following year. As a result his supporters control all 83 seats in the national assembly.

Several prominent opposition leaders have been detained this year on terrorism-related charges, including at least one whose presidential candidacy was rejected by the electoral commission, Amnesty International said.

The two opposition candidates on the ballot are Alassane Soumanou, who was a minister under Boni Yayi, and Corentin Kohoue, a veteran politician.

“Everybody knows that there’s no real choice in this election because the president chose the opposition candidates who can run against him,” said Mathias Hounkpe from the Open Society Initiative for West Africa.

Neil Thompson, an analyst with the Economist Intelligence Unit, said that under Talon’s leadership Benin “appears to be trading perhaps temporary economic growth for a growing political instability, one that may in the end undermine the very development Mr. Talon is using to justify his power”.

Charles, a 25-year-old student in the commercial capital of Cotonou who only gave his first name, said he was very concerned by questions of democracy and freedom.

“I won’t abandon my right to free expression for anything in the world,” he said. “These questions are going to influence my vote.”

Other voters were more focused on economic issues.

“We are not yet developed. We need to continue to improve our education and health systems,” said Aminatou, a 50-year-old teacher, who also gave only his first name.