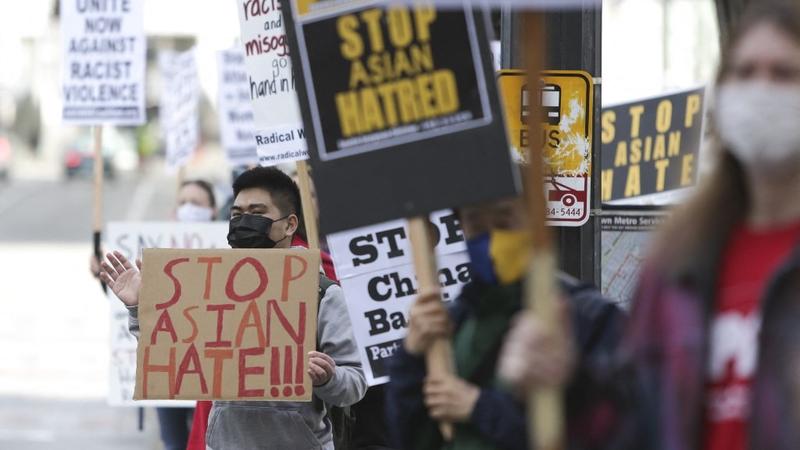 Demonstrators hold signs in Westlake Park towards passing cars during a national day of action against anti-Asian violence in Seattle, Washington on March 27, 2021. (JASON REDMOND / AFP)

Inflammatory comments by US political figures, including a former state governor, have been condemned amid a sustained increase in violence against Asian Americans.

Mike Huckabee, who was Arkansas' governor from 1996 to 2007, is the most-high-profile figure attracting criticism in the latest crop of public comments fanning anti-Chinese sentiment in the United States.

Aside from political players, Cornell University has come under fire for linking allegations of Chinese human rights abuses to a decision to back away from cooperation with a Chinese university.

Aside from political players, Cornell University has come under fire for linking allegations of Chinese human rights abuses to a decision to back away from cooperation with a Chinese university

In the Huckabee controversy, the conservative ex-politician mocked some US corporations' criticism of changes to voting regulations in Georgia and Major League Baseball's subsequent decision to pull its annual All-Star Game from Atlanta.

In a tweet on Saturday referring to the criticism from those corporations, Huckabee said: "I've decided to 'identify' as Chinese. Coke will like me, Delta will agree with my 'values' and I'll probably get shoes from Nike& tickets to @MLB games. Ain't America great?"

READ MORE: Hate crimes against Asian Americans have deep roots in US history

Lieu tweeted: "Coke likes me, Delta agrees with my values, I wear Nikes and my hometown (Los Angeles) Dodgers won the World Series. But it's not because of my ethnicity."

Lieu, in a question posed online, asked Huckabee's daughter Sarah Huckabee Sanders－who served as former president Donald Trump's press secretary and now is running for governor of Arkansas－if she agrees with her father. "Do you condone Mike Huckabee adding fuel to anti-Asian hate?" he said.

In Texas, a Republican congressional candidate recently made anti-Chinese remarks. On a question about US immigration issues at a GOP forum in Arlington, Sery Kim said she would oppose Chinese immigrants.

"I don't want them here at all. They steal our intellectual property, they give us coronavirus, they don't hold themselves accountable," Kim said.

"And quite frankly, I can say that because I'm Korean."

Kim's comments were condemned by Asian-American advocacy groups, and she lost two prominent endorsements from Young Kim and Michelle Steel, two Republican Korean-American members of the US Congress.

In a statement rescinding their endorsements, the two lawmakers said they have spoken with Sery Kim "about her hurtful and untrue comments about Chinese immigrants and made clear that her comments were unacceptable".

In the Cornell University case, the college's faculty senate rejected a resolution on a proposed dual-degree program between its School of Hotel Administration and Peking University.

Mainly citing Western "allegations of genocide and other human rights violations against China", opponents of the program voted against the academic partnership on March 31.

The Chinese government, many Western civic groups and individual journalists have refuted the claims that the West has leveled against China, in particular its handling of affairs in Xinjiang Uygur autonomous region, but such information is going unheeded.