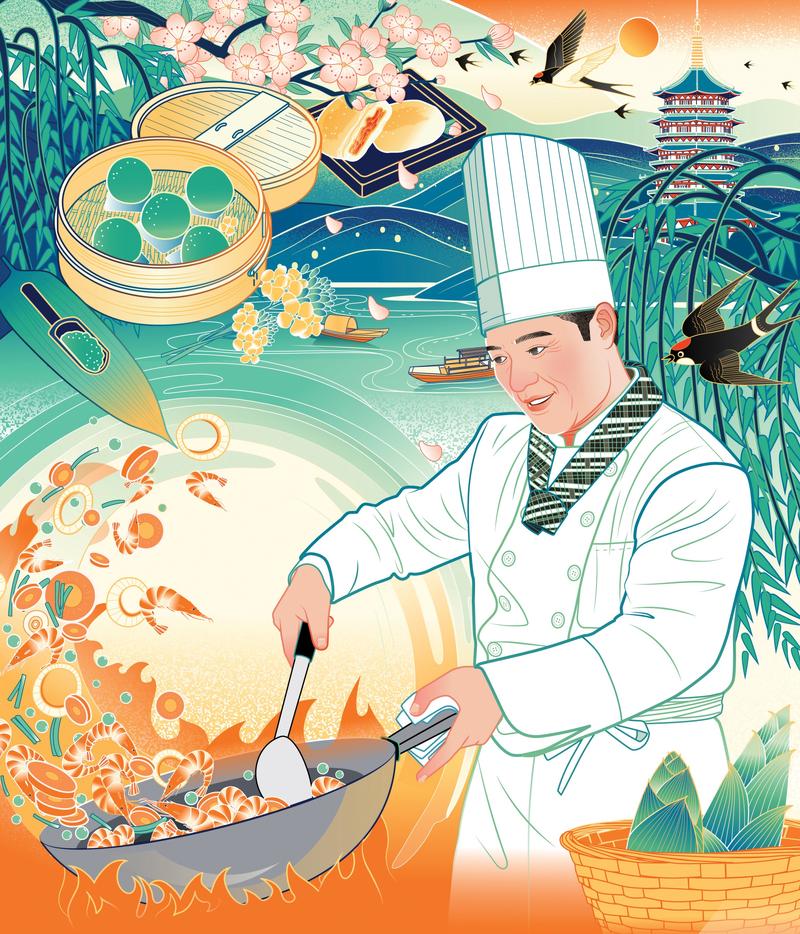 Before dawn, fishermen in Laizhou, a city in Yantai, Shandong province, start the day by catching shrimp off the Jiaodong Peninsula.

After hauling their nets in and returning to shore, they begin to sort the shrimp, in particular looking for those that have bigger, rounder heads.

They are seeking what local people refer to as the “peach blossom shrimp” — a delicacy that can be found only in spring.

“The shrimp were given this name because peach blossom time, from late January to early April, is the best period to eat them,” said Gao Jing, brand marketing manager for Lu Style, a Beijing restaurant chain specializing in Shandong cuisine.

The range of food that can be found only in spring varies nationwide, especially along China’s eastern and southern coasts.

From freshwater fish and seafood to vegetables, chefs are using traditional and creative ways to transform these seasonal ingredients into delicacies. Cold-chain transportation also helps them bring the tastes of spring to diners throughout the country.

Lu Style buys freshly caught shrimp from the source and transports these to Beijing the same day.

Gao said people in Laizhou are only allowed to buy peach blossom shrimp at local markets on a first-come, first-served basis, as diners elsewhere in China, and even in the city, may not have tried the delicacy.

He said fishermen are permitted to select just 1 kilogram of the shrimps from each catch, which calls for good eyesight and patience. 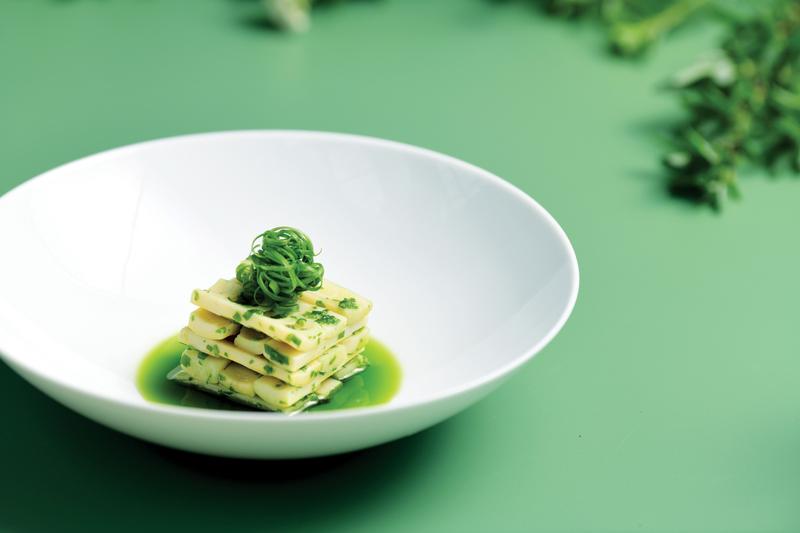 In February, the delicacy was priced as high as 400 yuan (US$62) per kg during the Spring Festival holiday.

“Before Qingming Festival, these shrimps do not lay eggs and have a paper-thin soft shell. They only need boiling for 60 seconds before they are ready to eat,” Gao said.

“The shell is so soft that you can’t feel it in your mouth, and the tail tastes sweeter than other types of shrimp, giving people in Laizhou the flavor of spring,” he added.

Xiangchun, or Chinese toon leaves, along with shepherd’s purse, which grows in fields, on roadsides and in courtyards, and malantou, or Indian aster, are all popular vegetables at their best in spring. Others, such as broad beans, are only available for one or two weeks.

Alibaba-owned grocery retail chain Freshippo starts putting some 60 spring vegetables on the shelves at its outlets nationwide in February. To extend the supply period, it uses a dozen airlines to transport produce from the source.

Qu Yang, a purchaser at Freshippo, said most spring vegetables are available until May.

Meanwhile, edible flowers such as the Sophora japonica — also known as the Chinese scholar tree — start to blossom in March in Kunming, capital of Yunnan province, while in April it is the turn of the Sophora in Shaanxi province.

“Kalimeris indica (Indian aster), a herbaceous perennial plant, is sent by air from Jiangsu and Zhejiang provinces to Xi’an, capital of Shaanxi, while red xiangchun from Yunnan is sent to Shanghai. These flights enable customers in Beijing and elsewhere to enjoy spring vegetables at almost the same time as diners in the sources of origin,” Qu said. 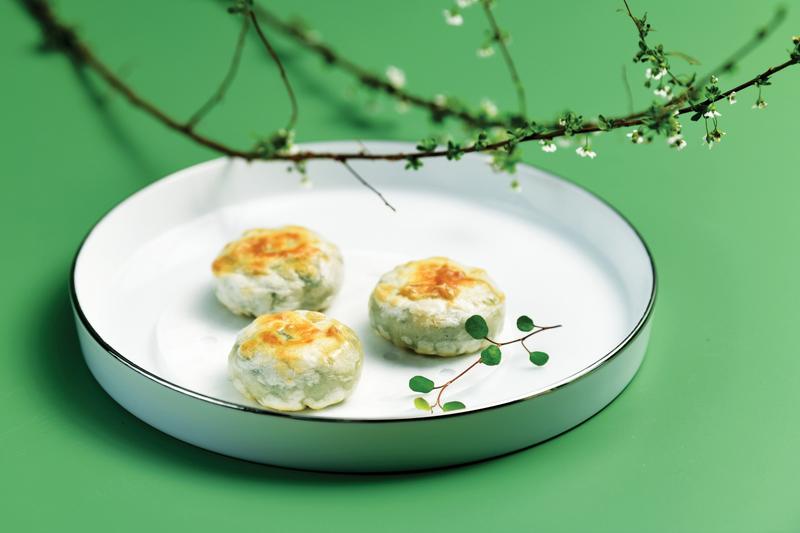 This year, Freshippo is also providing niche local spring offerings, such as garlic from Nanjing, capital of Jiangsu, dandelions from Beijing and mulberry leaves from Zhejiang.

Qu said edible flowers from Kunming, such as jasmine, gorse and chrysanthemums, are sold nationwide. Xiangchun is available throughout the year.

The development of cold storage and cold-chain transportation services has not only benefited customers, it has also helped chefs bring authentic hometown flavors to other cities.

Diners in Beijing can enjoy traditional spring dishes from Shanghai, Jiangsu and Zhejiang. The most popular spring choice in the two provinces is seasonal bamboo shoots.

Zhu Haifeng, chef at Shanghai Cuisine in Beijing, which has held a couple of Michelin stars for two consecutive years, said that spring is the best time to dig fresh bamboo shoots.

Yanduxian soup is a traditional use for bamboo shoots, which are combined with fresh, pickled streaky pork.

Zhu said the term yanduxian refers to the use of pickled meat to make soup. Some chefs use pickled fish, while in Shanghai, pickled pork is preferred. “Yanduxian gradually became the name for the dish,” he added. 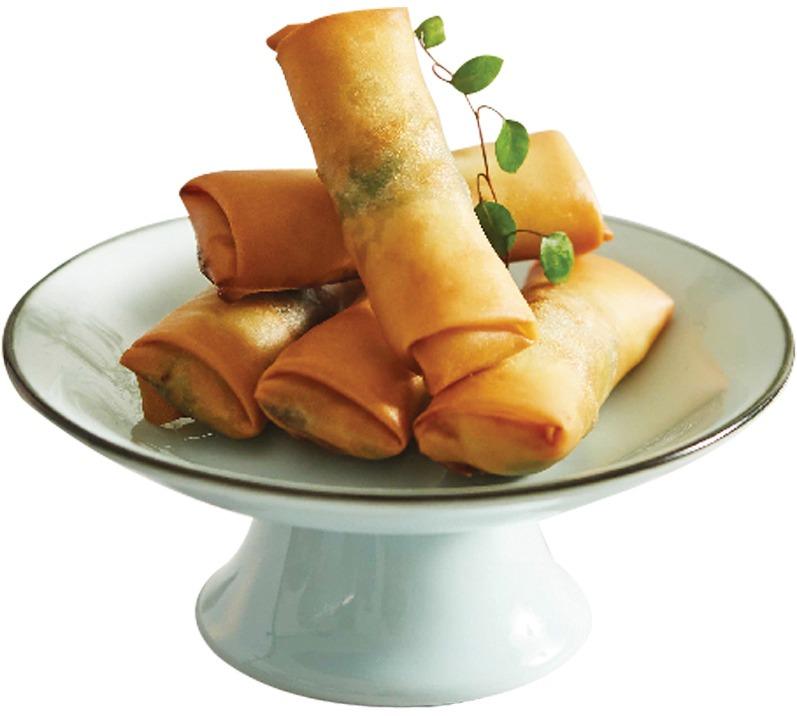 This spring, Zhu has come up with his own way to present yanduxian — fusing it with another signature dish from Jiangsu and Zhejiang — lion’s head meatballs.

He boils the soup before mincing the ingredients for yanduxian to make the meatballs. He then immerses them in the soup and simmers it for two hours. The crunchy bamboo mixed with the juicy, minced pickled pork enhances the complex taste of the meatballs.

The key lies in making the meatballs. If the ingredients are boiled for too long, the pickled pork will make the soup too salty, the meat will lose its texture, and the soup will lack flavor, Zhu said.

“In spring, I make the soup light and clear, while in winter, I often thicken it by using more fat. A good chef knows how to cook the same ingredients in different seasons,” he added.

Zhang Guofei, executive chef at the Subangyuan restaurant chain in Beijing, which specializes in Jiangsu cuisine, said the bamboo shoots he uses are freshly cut in the province and quickly frozen before he takes delivery.

“When we cook the bamboo shoots, we first return them to room temperature before boiling them with sugar to get rid of the bitter taste,” he said. 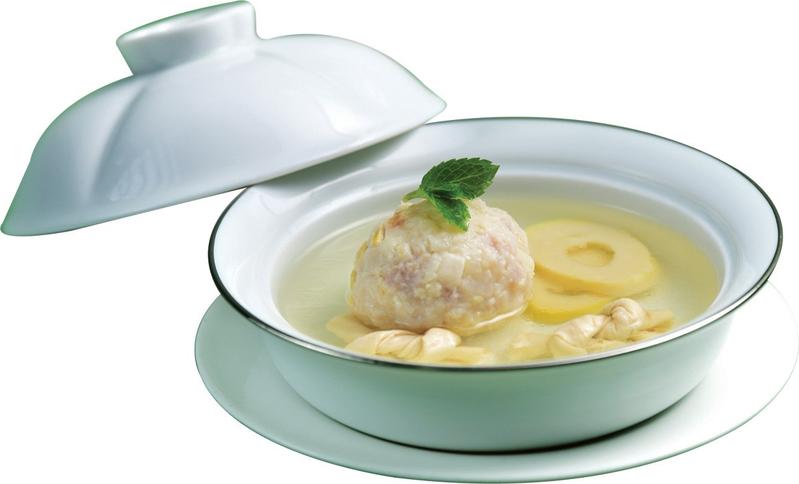 According to Zhu, many spring vegetables were originally edible wild herbs, but some are now planted by farmers for the market.

Over time, people have worked out the best way to cook wild herbs, he said, adding, “Toothed burclover is best matched with alcohol when fried, and the ideal accompaniment for malantou is dried tofu.”

He said that in Shanghai, toothed burclover is usually served in small local restaurants and is suitable as fillings for cakes or steamed stuffed buns with bamboo shoots.

Zhu said tender shepherd’s purse makes it suitable for fillings. Its fragrance is brought best out by wontons, and it is also good in spring rolls and qingtuan — sweet green glutinous rice balls.

Qingtuan, a popular spring snack in the Yangtze River Delta, is traditionally stuffed with a red bean filling or dried meat floss. The green glutinous skin is dyed with wormwood juice.

“The best time to eat qingtuan is when it’s cooled to room temperature after being steamed, which brings out the flavor of the rice balls,” Zhu said.

“If it’s too hot, then the fragrance of the wormwood will disappear, and if it’s too cold, the glutinous rice will be dry,” he added.

Spring is the best season to eat freshwater fish such as yellow cracker and Yangtze saury as well as river snails. However, as the Yangtze River Protection Law took effect on March 1 to protect the river’s ecosystem, fishing for Yangtze saury is no longer allowed.

Saury wonton has become a popular seasonal snack on the internet in recent years. It is a traditional spring dish in Jiangyin, Jiangsu, which is located on the southern bank of the Yangtze River estuary, a key waterway for migrating saury. 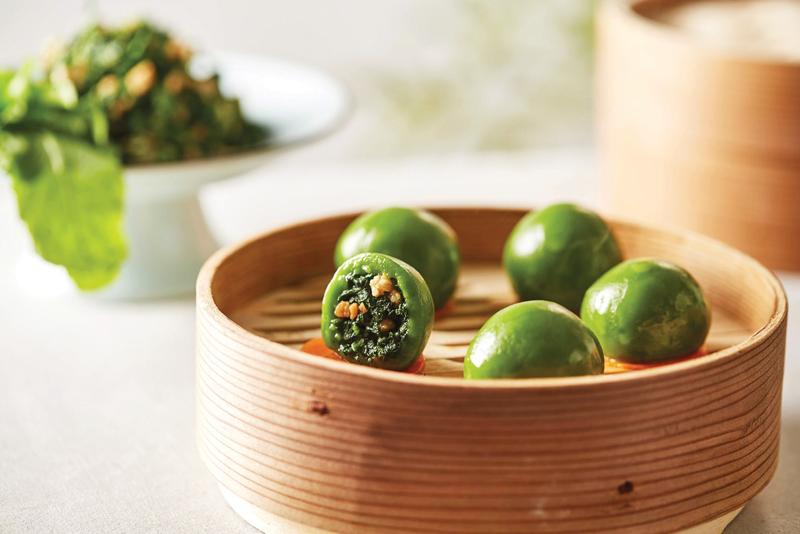 Even though chefs can no longer use Yangtze saury, they make saury wonton by using fish from the sea.

Zhang, who grew up in Huaian, Jiangsu, wants to bring his hometown delicacies to diners in Beijing.

The Subangyuan chain offers a special spring menu from the end of March, to which Zhang has added saury wonton with a filling of minced saury and chives from Jiangsu and Zhejiang.

He has created a new dish — yellow cracker spring rolls — to provide a fresher flavor than traditional vegetable spring rolls.

Zhang also fries river snails with leek moss to produce a spring flavor. “It’s the best season to eat river snails, as the meat is tender and plump before Qingming Festival,” he said.

He uses snails from Jiangyin, which have been cultured for 12 months. “Each year, my team visits Jiangsu or Zhejiang to find more local delicacies and ingredients to bring to Beijing,” he added.

In Yunnan, edible flowers such as jasmine, gorse and Ottelia acuminata, an aquatic species, are in demand when spring arrives.

Shi Junfeng, executive chef in Beijing at restaurant chain In & Out, which specializes in Yunnan food, said simple methods are used in the province for floral cuisine.

“Flowers can be made into soup, salad, barbecue food, or fried like tempura, which retains the original flavor,” Shi said.

He added that fried jasmine with eggs is a traditional Yunnan dish, along with deep-fried jasmine, which retains the shape of the blossom.

“The best months for gorse are March and April, and it should be eaten when tender before it blossoms. Gorse should be cooked as soon as possible after it is picked,” Shi said.

Zeng Zhiren, chef at Catch restaurant in Guangzhou, capital of Guangdong province, uses roses for his French-style spring feast. He has created a new snack, duck rillettes, and is also using rose butter and sourdough to pair with a newly launched floral-themed cocktail menu. 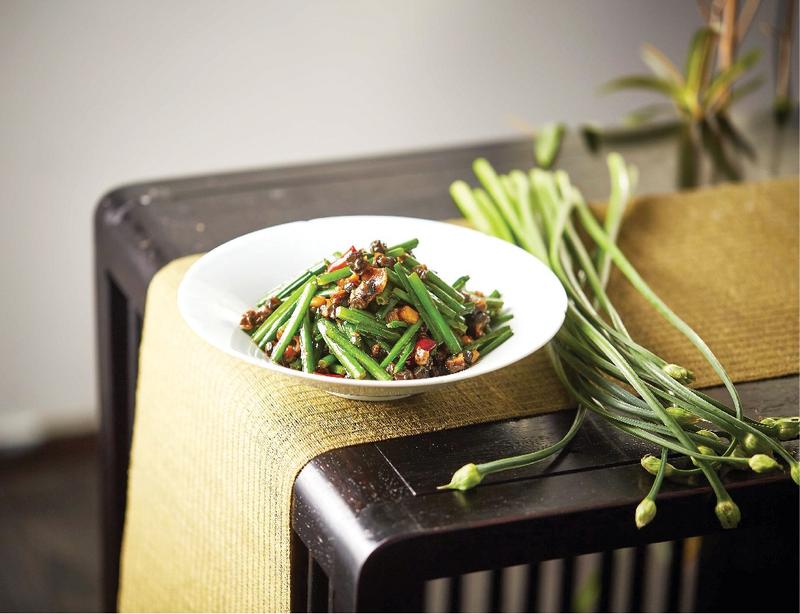 He marinates duck breasts and legs with roses and salt for four hours before slowly roasting these for nine to 12 hours at a heat of 90 C.

He then mashes the meat into a sauce and adds foie gras. The duck sauce is eaten with baked sourdough and rose butter.

“Roses are available all year, but in spring the flowers are larger and more colorful. The dish is silky-smooth and the fresh roses balance the greasiness of the duck meat and foie gras to a certain degree,” Zeng said.

Zijin Mansion, a Cantonese cuisine restaurant in Beijing with one Michelin star, launched a new dim sum menu on April 1.

“Spring is the best time to eat peanut sprouts, as they are full of nutrients and plump at this time of year. They are tasty, whether served cold or deep-fried,” Wang said.

He pours homemade chili oil on the quickly-boiled peanut sprouts and goose lip to create a crispy dish that enhances the flavor of the oil.

“Compared with bean sprouts, peanut sprouts are thicker, crispier and have a sweet flavor,” said Wang, who grew up in Meizhou, Guangdong.

He added that people in the province love to cook soup all year round, but the ingredients vary according to the season.