By Prime Sarmiento in Hong Kong and Leonardus Jegho in Jakarta

Wednesday, February 17, 2021, 11:06 By Prime Sarmiento in Hong Kong and Leonardus Jegho in Jakarta 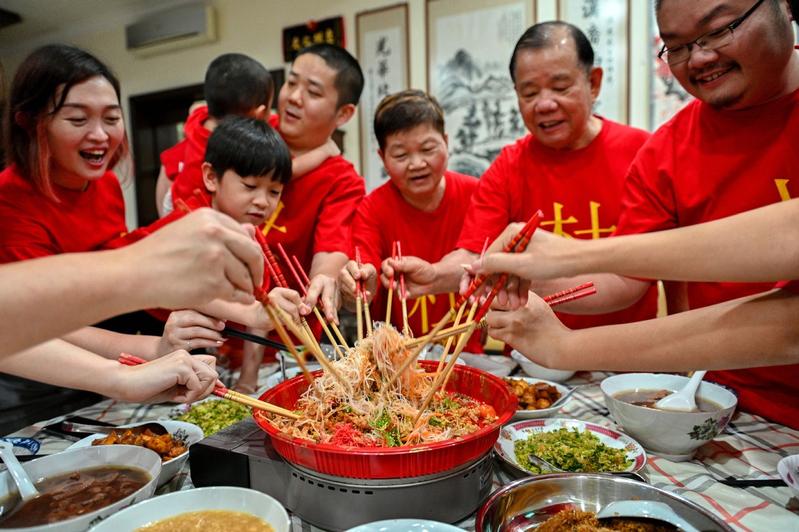 In Jakarta, the striking decorations for Chinese New Year in the lobby of the building housing Indonesia's Ministry of Religious Affairs have been shared on screens as a social media hit across the vast nation.

The captivating display is a first from the ministry and conveys a strong message from the Minister of Religious Affairs, Yaqut Cholil Qoumas, that Indonesia belongs to all citizens, regardless of people's backgrounds.

The reach of the display is perhaps even greater as Indonesians and others in Southeast Asia reach for their mobile devices to celebrate the Spring Festival amid toned-down festivities because of the coronavirus.

Across Southeast Asia, this year's Spring Festival celebrations have been muted by the pandemic. But, as in Indonesia, the spirit of unity in diversity has been championed for this year's festival

As leaders joined ordinary Indonesians in ushering in Chinese New Year with the mostly virtual celebrations, they also made clear that the contributions of ethnic Chinese to Indonesia's development are valued in a multiethnic country.

Indonesian President Joko Widodo used his social media accounts to send New Year greetings to the ethnic-Chinese community, which makes up less than 5 percent of the country's population of 268 million.

Tessyawan Tirta Senjaya, secretary of the Confucian Supreme Council of Indonesia, is confident that the Indonesian government "will continue to strive for the growth of the spirit of Bhinekatunggalika (unity in diversity)".

Across Southeast Asia, this year's Spring Festival celebrations have been muted by the pandemic. But, as in Indonesia, the spirit of unity in diversity has been championed for this year's festival.

In Malaysia and Singapore, news reports show how the Chinese communities have complied with the government regulations that limit the sizes of gatherings as part of anti-coronavirus efforts.

Some Singaporeans have even been playing recorded blessings while tossing yusheng－a raw fish salad that symbolizes prosperity and abundance, according to the Xinhua News Agency. The recordings underscore the Chinese community's compliance with government advisories against the loud uttering of auspicious phrases while tossing the yusheng.

In an address on Friday, the eve of the Chinese New Year, Muhyiddin reminded Malaysians to observe the health protocols imposed to prevent the spread of COVID-19 during the festivities. These include limiting family reunions to up to 15 people.

IN PHOTOS: Chinese New Year celebrated around the world

Singapore's Prime Minister Lee Hsien Loong said that while COVID-19 has forced Singaporeans to scale down their gatherings, he reminded his countrymen that these precautions are needed to "keep our loved ones safe".

He also thanked essential workers who have made "personal sacrifices to keep Singapore going during this festive period".

In Binondo, a district in the Philippine capital Manila that has long been known as the center of Chinese-Filipino life, the streets are festooned with red Chinese lanterns, even though families have been advised to celebrate at home.

Leonardus Jegho is a freelance journalist for China Daily