A glimpse into history

By Xin Wen in Xi’an 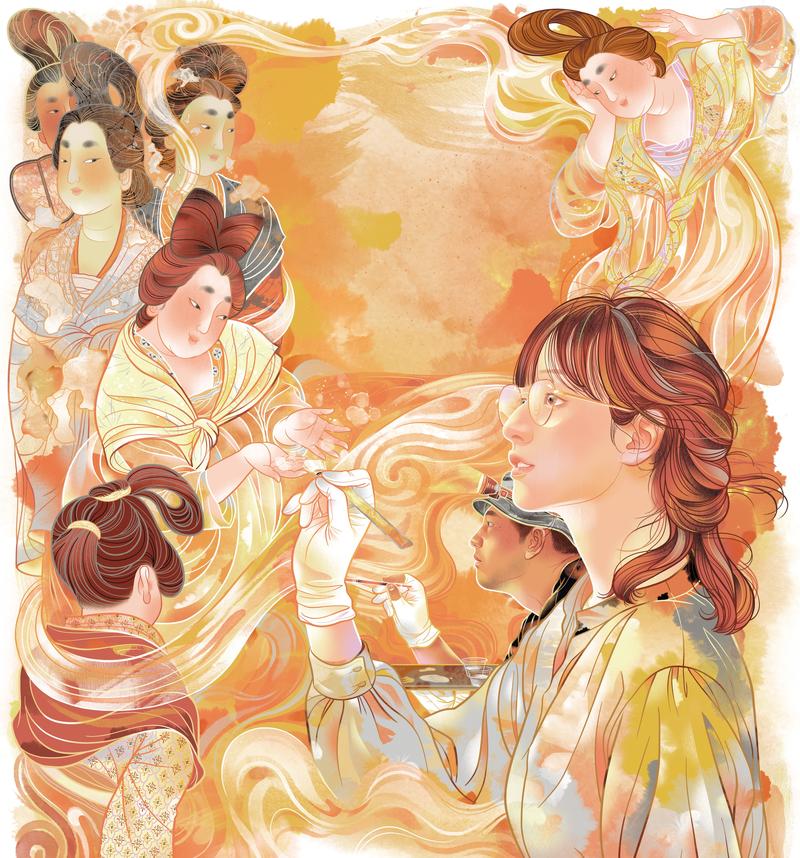 Incense permeates corridors linking the magnificent storied buildings of an imperial palace before wafting beyond the city walls.

This magnificently detailed scene forms part of a mural discovered at the Tomb of Prince Yide, resting place of the grandson of Emperor Li Zhi and Empress Wu Zetian from the Tang Dynasty (618-907).

Located in Xianyang, Shaanxi province, the tomb is more than 85 kilometers from downtown Xian, the provincial capital.

The mural is in a collection housed at Shaanxi History Museum in Xi’an for more than two decades. The museum, situated near Big Wild Goose Pagoda, is one of the best-known in China.

In September, replicas of this mural and more than 40 others from the museum featured in an exhibition that toured universities in Taipei, Taichung, Taoyuan and other areas of Taiwan.

When the display arrived in Taipei, one visitor wrote in the guestbook: “I want to fly to Chang’an (modern-day Xi’an) immediately and enjoy the murals in person.”

Liu Jia, a project manager for the Shaanxi Provincial Cultural Relics Exchange Association and a curator for the exhibition, describes murals as “time capsules”.

“They reveal the prosperity during the Tang Dynasty, enabling us to explore, research and verify how politics, society, art and culture developed at that time,” Liu said. 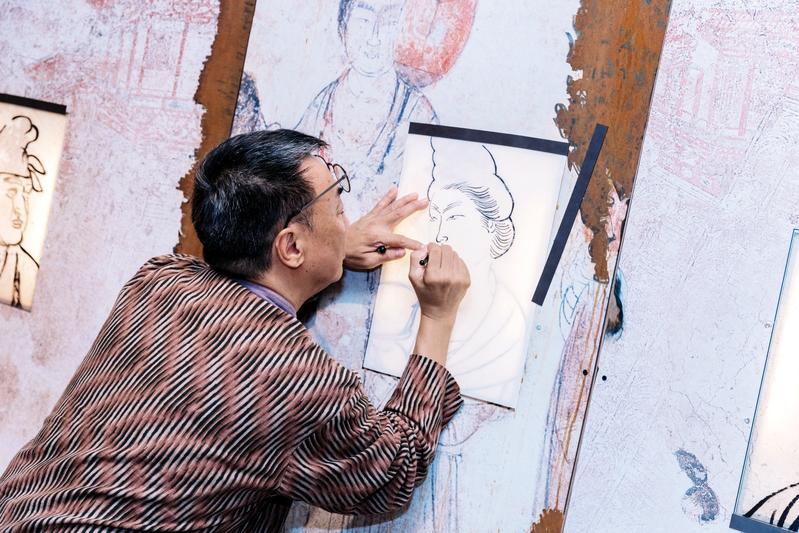 A visitor copies a portrait of a woman from the Tang Dynasty (618-907) at an exhibition in Taiwan of murals from that era. (PHOTO PROVIDED TO CHINA DAILY)

Murals are exceptionally popular, she said, adding: “A mural has a trace of mystery due to its fragility, and is difficult to restore if damaged.”

The collection at the Shaanxi History Museum, housed in an area of more than 1,000 square meters in the Treasure Hall of the Tang Dynasty Mural Paintings, features 640 artworks.

It is China’s first collection of Tang Dynasty tomb murals and the exhibition hall is the country’s largest for such artworks. Both the collection and the hall are the result of Sino-Italian efforts to preserve murals.

Before entering the hall, which officially opened to the public on June 20, 2011, visitors must wear shoe covers.

The underground hall is luxuriously decorated and features high-tech equipment such as temperature and humidity controls.

Of the 293 wall paintings on display, 18 murals in five sets have been listed as national treasures by the National Cultural Heritage Administration.

Most of the tomb murals exhibited are from three tombs in the Tang Dynasty, which were owned by relatives of Empress Wu Zetian (690-705), the sole female ruler in ancient China.

Murals found inside the tombs were first relocated for restoration work in the 1960s and 1970s. 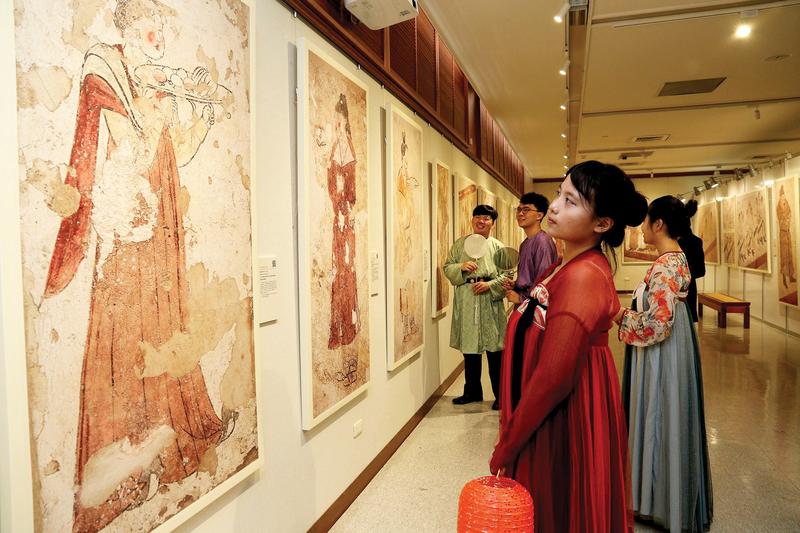 The Treasures of Prosperity, a show in Taiwan of murals from the Tang Dynasty (618-907), attracted many people in traditional dress. (PHOTO PROVIDED TO CHINA DAILY)

Yang Wenzong, deputy director of the museum’s mural collection base, who has worked at the institution for more than 30 years, witnessed the murals being removed from the tombs. He has also seen the rapid advances made in restoration techniques over the years.

“When we speak about murals from graves, we often refer to them as Tang tomb murals,” Yang said.

“We have also unearthed many valuable and well-preserved murals from graves before the Tang Dynasty, but their number and value are far below those found at Tang tombs.”

The three tombs were owned by princes and princesses from the imperial family during the Tang Dynasty, and murals from these graves are rich in color, showcasing the skills of artisans at that time, Yang added.

“Interestingly, the owners of the three tombs all committed suicide by imperial order from Empress Wu Zetian and their mausoleums were later rebuilt by the emperors who succeeded her,” he said.

There are numerous Tang tomb murals in Xi’an and central Shaanxi.

Yang said there were three types of murals at the time — two of them found above the ground and one below. The former could be seen mainly at grottoes, temples and palaces, while the latter was found at graves.

When murals were discovered in underground graves, they were often badly affected by moisture, mold and bacteria. They needed to be restored and cared for before being put on display. 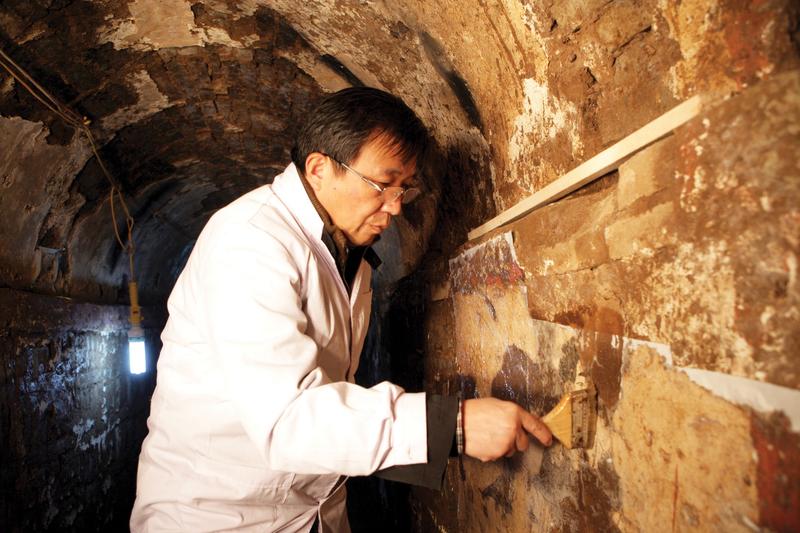 Yang Wenzong from Shaanxi History Museum in Xi’an protects the mural paintings in the Tomb of Han Xiu. (PHOTO PROVIDED TO CHINA DAILY)

Yang, 59, a graduate from the School of Culture and Museology at Northwest University in Xi’an, started work on restoring cultural relics immediately after joining the Shaanxi History Museum in 1986.

In the mid-1990s, Yang started to tackle murals taken from the tombs, restoring them in the institution’s scientific laboratory.

“The murals, which are made from clay, are quite fragile. To restore them, they first need to be removed from the walls they are on,” he said, adding that the fragile coverings on the back of the artworks also need reinforcing.

Before being moved, a piece of thin cloth is adhered to the front of a mural with peach gum to protect the artwork.

“The glue has to be dissolvable, as it needs to be wiped off after the murals are moved to our lab,” Yang said.

After being relocated, the murals are ready for restoration.

Yang said: “Scientifically restoring murals is still a tricky problem worldwide. After thousands of years, these highly valuable ancient wall paintings inevitably experience peeling and hollowing. Based on their condition, conservator-restorers need to work out a plan for each mural.”

Most of the time, restoring murals is an onerous task.

In 2014, after the tomb of senior Tang Dynasty official Han Xiu was unearthed in the Chang’an district of Xi’an, Yang and his colleagues spent three months painstakingly dipping cotton swabs in ionized water to clean contamination on the surface of murals found at the site.

“We need to ensure that the cleaning agent we use does not affect the murals’ color. Cultural relics can’t be used for testing, so the restoration work has to be infallible in order to gauge their historic, artistic and scientific research value,” Yang said.

“Discovering these exquisite wall paintings in a tomb created a real stir in the archaeological academic world,” Yang said.

“The tomb was initially found by grave robbers, and after opening it, there was nothing left inside except these murals.” 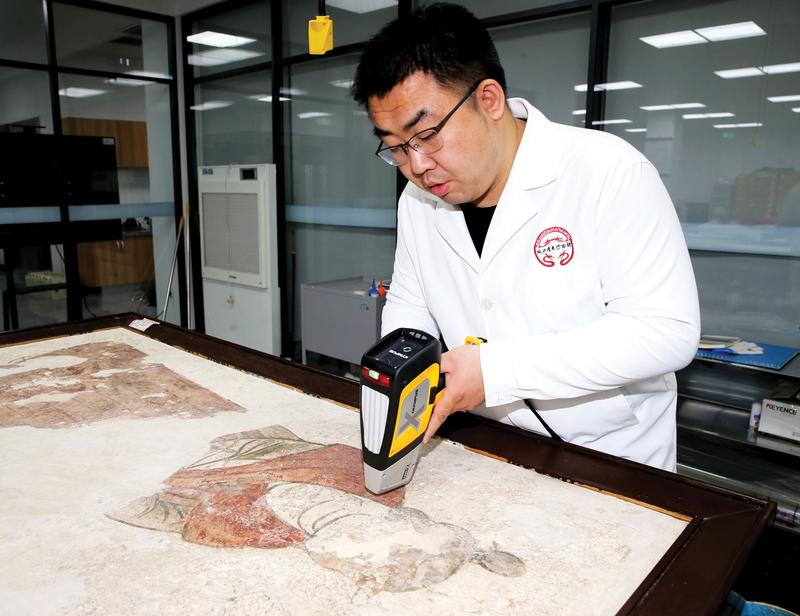 Yang said experts and painting scholars arrived at the site in droves at the time, and he was responsible for relocating the murals, which involved a series of complicated procedures.

Based on his years of experience, Yang said two factors play a key role in restoring murals — minimum interference and reversibility.

“Reversibility means that when our specialists want to restore the murals later on, the materials added for restoration work can be replaced with new ones at any time,” he said.

Supervising 18 specialists working in the mural restoration laboratory, Wang said that before they enter the lab every day, the technical staff members have to pass through a special machine that eliminates bacteria.

“The lab is kept ventilated and dry all year round. Each specialist uses unique skills to restore the murals, and this work includes archaeological drawing, copying, collecting information and treating mold.

“We remind ourselves not to panic and to avoid rushing our work. Pigments and brushes used for writing are our friends, as we use them widely each daily in restoration work,” Wang said.

“It’s vital to preserve the original pigments on the murals while we clean any contamination.”

After the cleaning work is completed, conservator-restorers add a strengthening agent and fill in any loose areas on the back of the artworks.

Wang said that in recent years, honeycomb aluminum, a new material, has helped restorers with their work by providing additional support for the murals.

For Yang and Wang, their work not only involves restoring murals, but also unveiling a story and showcasing features from a particular era to bring ancient art back to life in modern times. 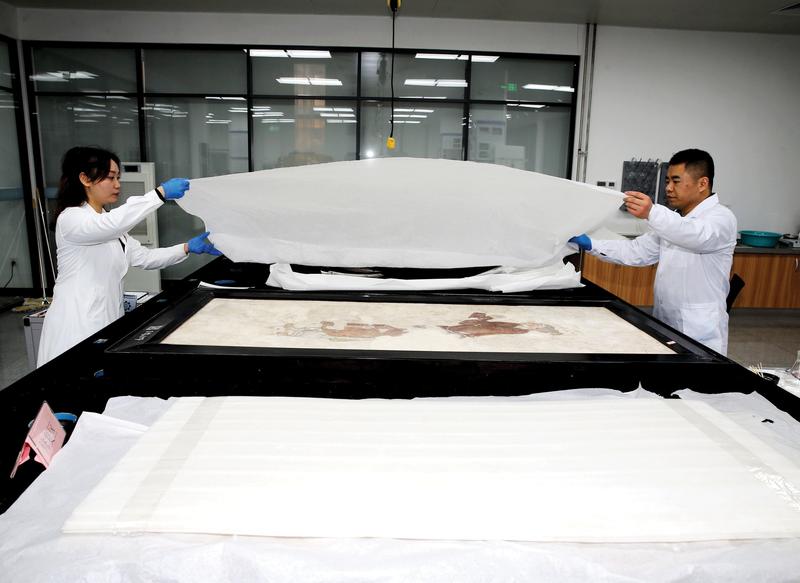 Over the years, protecting murals has been a tough task in safeguarding cultural relics at home and abroad.

In the West, murals can be traced to prehistoric times, and during the Renaissance in Italy, they demonstrated the era’s immense prosperity.

Records show that murals were first protected in Western countries hundreds of years ago.

Zhou Weiqiang, a researcher in the cultural relics protection technology department at Northwest University, said that during the Renaissance, maintaining and repairing murals began immediately after a work was completed.

For example, such work was carried out on Genesis, the Michelangelo fresco on the ceiling of the Sistine Chapel in the Vatican, Zhou said.

“Michelangelo created the most striking mural at that time, and the fresco was so huge that once it was completed, his students started maintenance work on the chapel ceiling,” he added.

China began protecting murals in the 1950s, with this work being performed at the Mogao Caves in Dunhuang city, Gansu province, before the 1990s.

In 1995, China and Italy started holding training classes in Xi’an and Beijing aimed at conserving and restoring cultural relics. These sessions were also held in 2006 and 2007.

Zhou said this joint cooperation enabled conservator-restorers to better use techniques to detect problems with murals, along with new materials to protect the artworks.

Tomb murals need to be relocated in order to protect them, Zhou said. However, in the near future, such work will be carried out onsite, due to advances made in technology.

In relocating and preserving murals, China has set its own standards for this work, and has also helped safeguard such artworks in Japan, Zhou said.

At the Takamatsuzuka Tomb in Asuka village, Nara prefecture, a burial chamber was found, along with colorful frescoes on the walls.

In recent years, these paintings — designated as national treasures in Japan — have been removed from the tomb for protection work carried out with the help of mural conservator-restorers from China.

Zhou said particular attention needs to be paid in the future to the digital preservation of murals.

He added that more museums are being built close to mausoleums to better carry out preservation efforts. For example, the Hanyangling Museum in Xianyang city, Shaanxi, has done well with onsite work for its cultural relics.

In Taiwan, The Treasures of Prosperity, the exhibition of Tang Dynasty murals, was due to end on Jan 16.

Liu, from the Shaanxi Provincial Cultural Relics Exchange Association, said: “For young people in Taiwan unfamiliar with the history of the Tang Dynasty, the exhibition resonated with them and played a key role in promoting cultural exchanges.”

Wang Mengnan in Xi’an contributed to this story.