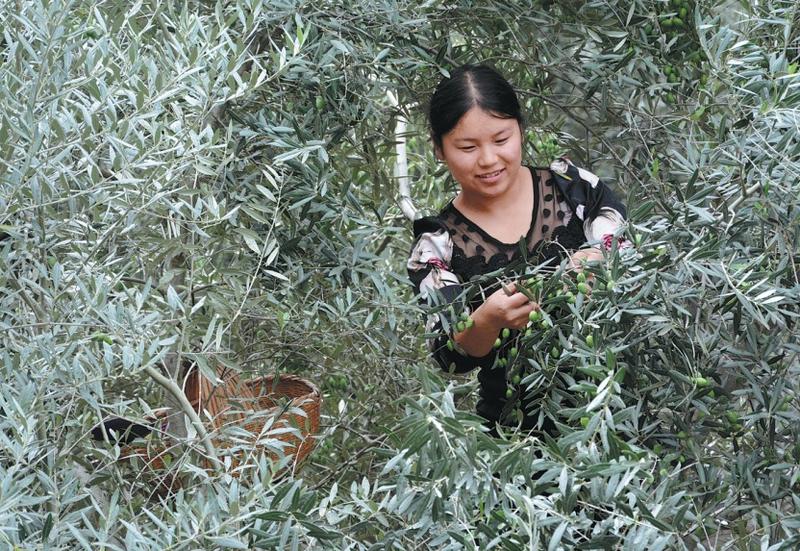 Though still regarded as a newcomer to China, the olive tree is nicknamed the "premier's tree" because Premier Zhou Enlai introduced the Mediterranean native in 1964.

That year, Zhou not only promoted the importation of about 10,000 olive trees from Albania, but also planted one in Kunming, capital of Yunnan province.

Now, the tree has become a source of prosperity in Longnan city, Gansu province. Its fruit has helped lift thousands of residents out of poverty as they, with local government support, fulfill Zhou's wish that the tree－whose fruit contains an oil rich in healthy antioxidants－should benefit rural people.

When the tree was introduced, Xu Weiying, then a researcher with the Chinese Academy of Forestry, was tasked with leading an experimental plantation.

Longnan was one of the places Xu visited in her quest to find areas suitable for large-scale cultivation. However, her visits to the mountain-encompassed city kick-started the continuing story of Liu Yuhong's family and the olive tree.

After being introduced to Longnan in 1975, experimental cultivation of the tree quickly proved successful. In the 1990s, in response to local government calls, many people, including Liu's parents, took unpaid sabbaticals from their jobs to grow olive trees.

None of them gained any financial benefit from the tree for a long time, though, as nobody purchased the fruit for processing, Liu said.

After Xu met Liu's father, who worked for the local procuratorate, and mother, a hospital physician, she encouraged them to start a processing plant to address their lack of income, Liu said.

She added that even though they had no idea about the future of the olive oil industry, her parents decided to follow Xu's suggestion as they thought it would be good to "green" the local mountains with the tree and people should benefit financially to sustain their cultivation efforts. 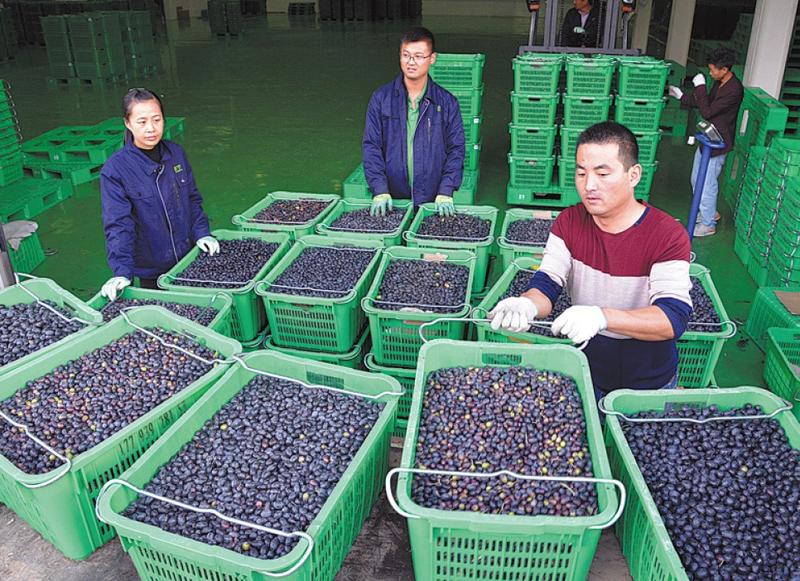 Workers transport olives to the factory in October. (PHOTO PROVIDED TO CHINA DAILY)

Farewell to a dream

When the Liu family's processing plant was launched in 1997, it was the first such facility in China. Xu gave the family the brand name "Xiangyu"－because its pronunciation is the same as Zhou's courtesy title in Mandarin (despite different characters)－free of charge.

The launch prompted great excitement among the farmers. Liu remembers people lining up for more than 2 kilometers to sell olives to the plant.

"Some people carried the fruit on their backs. Some carried it in baskets. Some put containers on tricycles. Some transported the fruit by donkey," she recalled, adding that the crowd was so large that it disrupted traffic.

She said the crowd placed great pressure on the small factory. Some workers lost their voices as a result of constantly talking to potential vendors, while other employees had to work around the clock in three shifts as the olives had to be processed quickly after being picked.

The trade also prevented Liu from following her dream of upholding justice as a lawyer, even though she majored in law at Lanzhou University, the best school in the province.

When she graduated with a bachelor's in 2005, Liu had the opportunity to work at an arbitration court in Shenzhen, Guangdong province.

However, she passed on the chance because her parents desperately needed her help to sell olive oil, which had failed to gain market recognition.

"I made a decision based on filial piety to my parents," said the 39-year-old, who is president of Xiangyu Olive Oil.

She set up a marketing team in Lanzhou, the provincial capital, and didn't consider moving back to Longnan until her father died suddenly on Nov 29, 2011, while purchasing olives.

An experience in 2013 made her determined to expand the business and help local people escape poverty.

"I was in the factory when a line (of people) more than 2 km long showed up. After discovering that many of the olives being offered by a senior had gone bad, I told him we couldn't accept them," she said.

"He knelt down and begged me, saying his family would have no income at all if he could not sell the fruit."

Eventually, Liu accepted the fruit, even though she had to throw the spoiled olives away. That day, she pledged to improve the plant's processing capability and also optimize the company's picking, collection and processing procedures.

She said some of the fruit offered went bad because of disorderly, unorganized harvesting－sometimes the farmers came to sell their crops "like a swarm of bees", bringing large amounts of fruit that were far beyond the plant's processing capabilities. 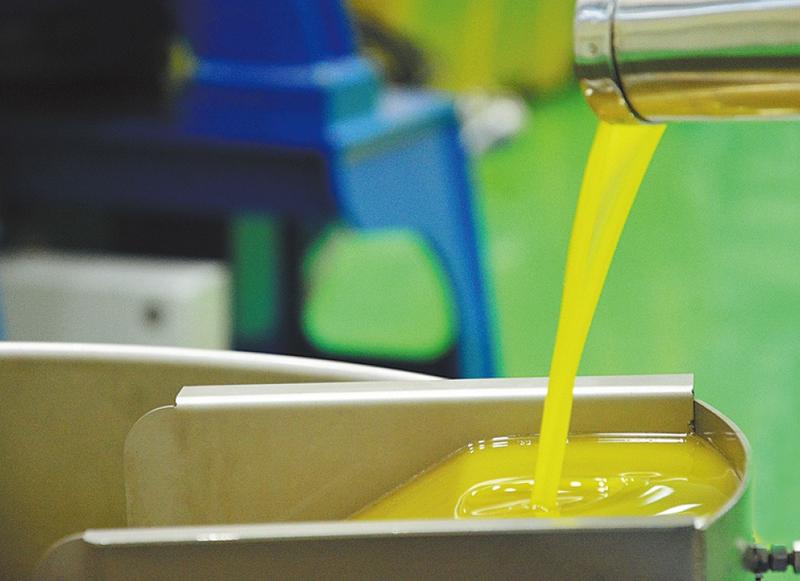 Olive oil is extracted at the factory. (PHOTO PROVIDED TO CHINA DAILY)

In 2013, with local government assistance, the company helped the farmers establish cooperatives, which improved communication and allowed them to set mutually acceptable harvest dates.

"This has ensured orderly production in our plant," Liu said.

Statistics that are still being compiled show that so far the company has helped lift 21,678 local people out of poverty, Liu said.

To date, Xiangyu Olive Oil has paid almost 1 billion yuan (US$154 million) to local farmers for their fruit.

At present, its annual production value is more than 200 million yuan.

The company's development has helped olive oil become one of the major industries in Longnan.

According to the local government, the area under olive tree cultivation in the city has expanded from 16,000 hectares in 2013 to 42,000 hectares, accounting for half the national total.

The industry employs more than 400,000 farmers and has helped 40,000 people shake off poverty.

In addition to Xiangyu Olive Oil, there are now 20 other producers of olive oil and byproducts in Longnan.

That's good news for Liu, who said Xiangyu Olive Oil only managed to break even a few years ago.

She used to help the company's development with money her family makes by selling electricity from a small hydropower station to State Grid, the national power company.

With the help of the country's policy of alleviating poverty through greater domestic consumption of goods and services provided by people in poor areas, the company is expanding its market at home and abroad, Liu said.

"Our vision is to build a world-leading olive oil company that covers the entire industry chain."

However, experts said Longnan still has to address a number of challenges to build national brands. 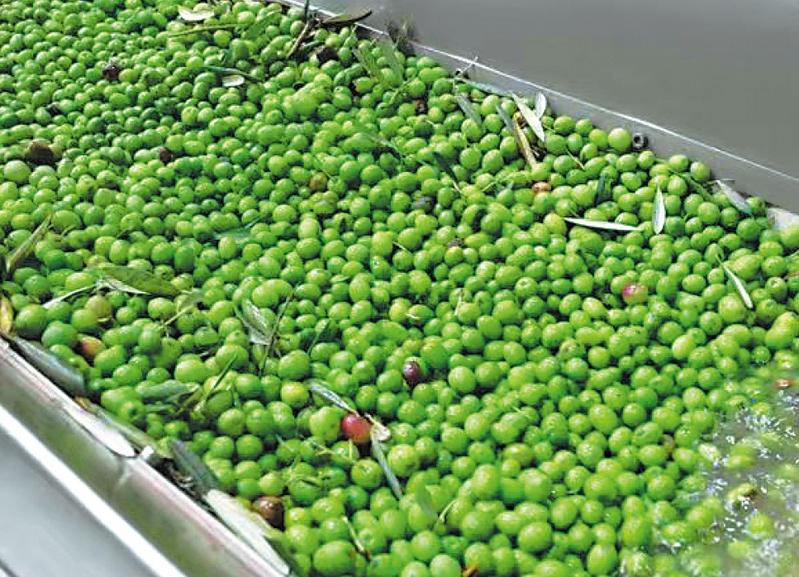 Olives are washed before being processed at a factory operated by Xiangyu Olive Oil in Longnan. (PHOTO PROVIDED TO CHINA DAILY)

Deng Yu, vice-president of the Longnan Economic Forestry Research Institute, said that despite Chinese olive oil winning international recognition, the scale of the city's companies is still small compared with major international producers. That means their transportation costs are high, while their processing capabilities are low.

Jiang Chengying, an olive oil expert at the Gansu Forestry Science and Technology Research Academy, said a lack of relevant knowledge and skills means some farmers fail to see their trees bear fruit, while others experience poor harvests. This has exerted a negative effect on efforts to raise incomes.

She called on the authorities to set a national standard for olive quality. "Without such standards, bad money is driving out the good," she said.

Despite the challenges, Liu is determined to continue her work to help local people because olive trees not only bring financial benefits but can also be of long-term environmental significance.

There are a lot of mountainous areas in Longnan where it is impossible to grow conventional crops, but they will support olive trees.

The trees help to clean the air because their leaves are green all year, while their root systems can also help to conserve water and bind the soil, thus reducing landslides and debris flows.