Indian farmers burn copies of legislation in show of defiance 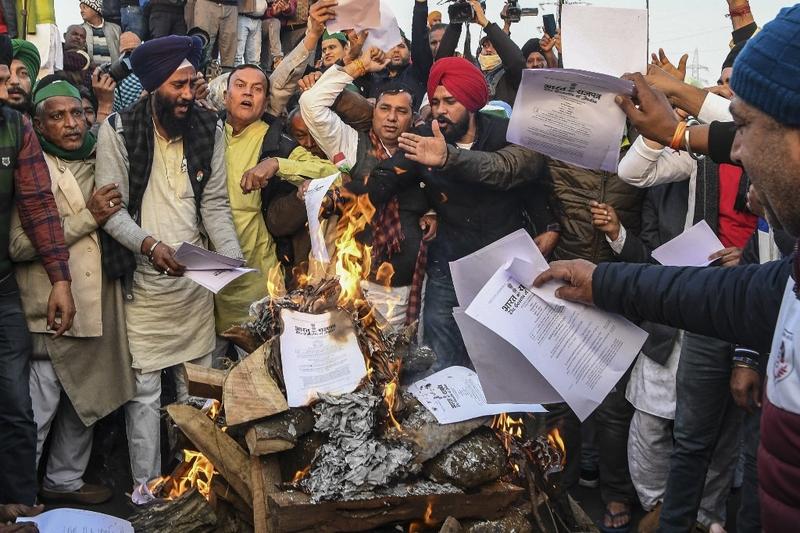 Protesting farmers burn copies of recent agricultural reforms bill while celebrating Lohri festival, as they continue to protest along a blocked highway against the reforms, at the Gazipur Delhi-Uttar Pradesh state border, in Ghaziabad, India, on Jan 13, 2021. (PRAKASH SINGH / AFP)

GHAZIABAD - Indian farmers burnt copies of the government’s new agricultural laws on Wednesday, pressing on with their protest against the reforms despite a decision by the Supreme Court to postpone implementation while their grievances are heard.

Tens of thousands of farmers have camped on the outskirts of the capital, New Delhi, for almost two months, protesting against what they say are laws designed to benefit large private buyers at the expense of growers.

The siege of a key roadway connecting the country’s capital where the farmers have been camping for the past two months will continue, protest leaders said, as will plans to march into the city later this month

The government led by Prime Minister Narendra Modi denies this, saying the legislation is required to reform an agricultural sector beset by waste.

At several protest sites on Wednesday, farmers threw copies of the three new laws on bonfires lit for the Hindu Lohri mid-winter festival.

“These laws are not in farmers’ interests,” said Gursevak Singh, 32, one of the protesters involved in the burning at a protest site in Ghaziabad, a satellite city of New Delhi.

“We want the government to use their brains and repeal these laws.”

The siege of a key roadway connecting the country’s capital where the farmers have been camping for the past two months will continue, protest leaders said, as will plans to march into the city later this month.

“We expect to mobilize up to two million farmers across the country on January 26,” Kulwant Singh Sandhu, general secretary of Jamhuri Kisan Sabha, one of the main farm unions, told Reuters. 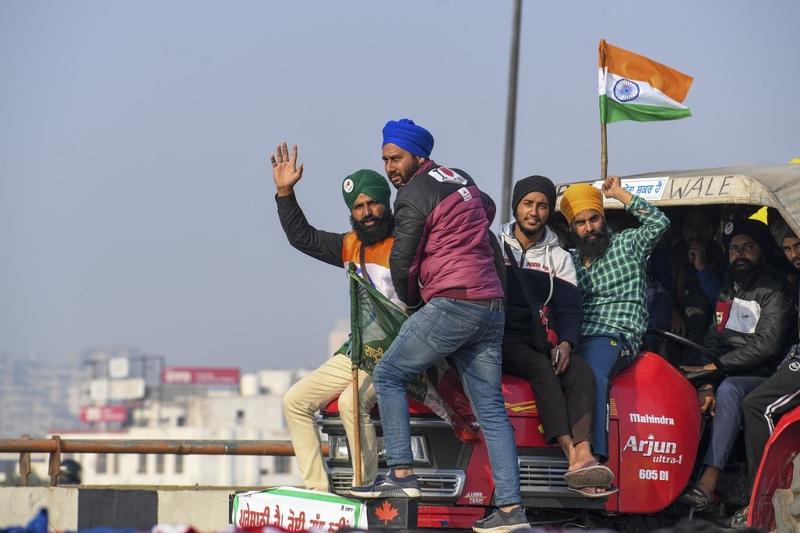 A three-judge bench headed by the Chief Justice of India Sharad A. Bobde on Tuesday barred the implementation of the law until the court hears the matter and arrives at a judgment. It also set up a panel to mediate between the government and the protesters and submit a report to the court.

“Suspending the implementation of the laws as an interim measure is welcome but is not a solution,” farmer leaders camped on capital New Delhi’s outskirts said in a statement. The government “must repeal the laws”

“Suspending the implementation of the laws as an interim measure is welcome but is not a solution,” farmer leaders camped on capital New Delhi’s outskirts said in a statement. The government “must repeal the laws”.

Farmer leaders, opposition and some of Modi’s allies fear the laws will lead to corporate control over agricultural production, processing, and markets and lower crop prices by removing government purchases causing losses to cultivators. While the government maintains that farmers are being misled and the new laws will lift curbs on purchases, remove middlemen and increase farmers income, the court’s decision to suspend the laws adds to its challenges. Modi had in his first term promised to double farmers’ incomes by 2022.

With the agitation refusing to die down, the court said the farmers’ right to protest cannot be stifled even as it urged protesters to return to their livelihood. It also ruled that the existing system of the government setting a minimum floor price for procurement of certain farm produce will continue and no farmer will be deprived of their land using the new laws.

The court will continue to hear the matter next week and will later decide on the constitutional validity of the laws approved by the parliament last year.

“It is unusual for the Supreme Court to assume the role of a mediator and appoint a committee to facilitate dialog,” said Ashish Deep Verma, managing partner of law firm Vidhisastras Advocates & Solicitors. “But this is a rare case involving larger public interest that the court in its wisdom decided to deal with this situation judiciously.”

According to Tuesday’s order, the country’s Attorney General K.K. Venugopal had “opposed vehemently” the judges’ suggestion to stay the law citing a number of past verdicts saying the judiciary should refrain from interfering in acts of parliament. The court, however, ruled that it had the powers.

Yet, the farmers have said they will “not participate” in discussions with the court-appointed panel saying all four committee members “have actively advocated” for the laws, according to their statement.

“It is clear that the court is being misguided by various forces even in its constitution of a committee,” farm leaders said in their statement.

The top court on Tuesday also agreed to hear the government’s petition to stop a rally planned by farmers on Jan 26, when India celebrates becoming a republic. The protesters said the government “is trying to misguide the court on this too.” They said plans to march to the capital city and agitations including sit-ins, meetings, and bike rallies across about eight Indian states will continue.

“If protesting farmers refuse to talk and negotiate their terms through the committee and insist on their demand to repeal the laws, it can complicate the matter for the court,” Verma said.