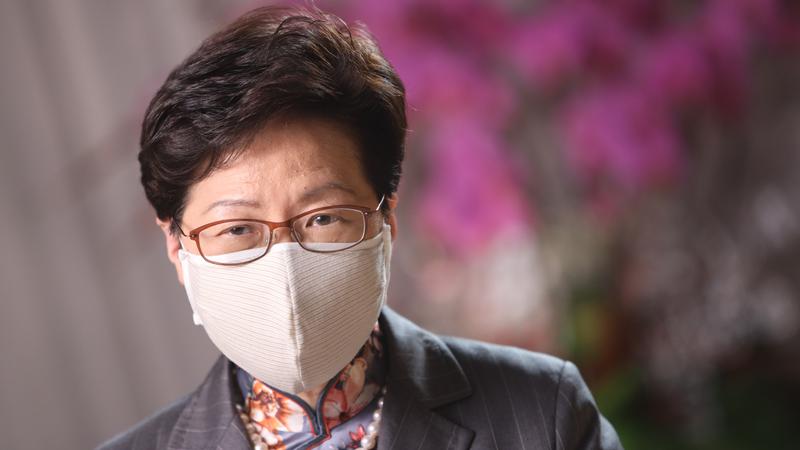 Carrie Lam Cheng Yuet-ngor, chief executive of the Hong Kong Special Administrative Region, lashed out on Tuesday at some foreign politicians for applying double standards, saying they value the security of their own nation but belittle China's legitimate security concerns, especially in the city of Hong Kong.

Her remarks came after US National Security Advisor Robert C. O'Brien said in a statement on Monday that the United States is "examining further options" to take action after last week's arrest of 55 people in Hong Kong

"Are they suggesting that the safety of Hong Kong people is of lesser significance and importance to the people of Hong Kong than the US citizens in American society?" she told reporters before the Executive Council meeting.

Her remarks came after US National Security Advisor Robert C. O'Brien said in a statement on Monday that the United States is "examining further options" to take action after last week's arrest of 55 people in Hong Kong on suspicion of subversion under the National Security Law in Hong Kong.

Saying that she would not comment on certain cases, Lam reiterated the principle that Hong Kong must enforce laws made in and for the territory, including its National Security Law, which came into force on June 30, or the laws would be nothing but an empty shell.

Lam said such double standards can also be found in the foreign politicians' strikingly different response to violence in their own country and that in Hong Kong in 2019.

She said that some overseas politicians have been condoning or encouraging rampant riots under the guise of backing democracy in Hong Kong since June 2019.

When a similar scene happened with the storming of the US Capitol by supporters of US President Donald Trump, they immediately condemned the violence, and some said it was "verging on sedition in American society", she said.

Last week, Hong Kong police, after making the arrests, said the 55 activists from the opposition camp had been linked to an unofficial ballot event, which was part of a long-term plan to paralyze the government and take the whole of society down.

Lam stressed that no one is above the law in a city ruled by law. It goes against the rule of law if anyone is beyond the reach of the law simply because of political standing.

Tam Yiu-chung, Hong Kong delegate to the Standing Committee of the National People's Congress, said Western countries have on more than one occasion interfered in Hong Kong's affairs by pressing the SAR government and the central government.

Their strong reaction to the arrests not only showed a lack of knowledge and understanding of Hong Kong's legal system, but is more proof of the close ties of the city's radical opposition with foreign powers, Tam said.