Editor’s note: Four employees — an express delivery worker, a water delivery man, an information technology engineer and a high school teacher — narrate their experiences in the past year and hopes for the new one. 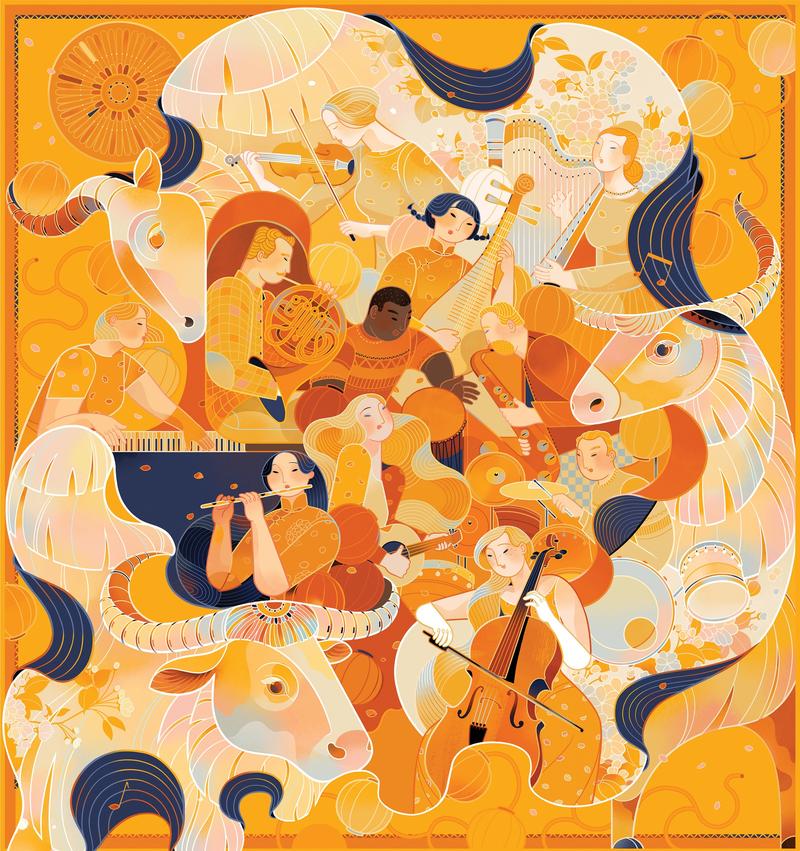 Express delivery worker Li Wei longs to give his 6-year-old daughter a cuddle every day.

Although they live in the same city, he has not seen her for more than a month.

On Dec 15, four local dock workers handling imported cold-chain food were identified as asymptomatic carriers of COVID-19, and as of Jan 4, the port city had reported 50 confirmed cases of the disease and 31 asymptomatic infections.

Li said: “Even when we are not so busy, I choose not to go home. As couriers, we’re exposed to different environments every day, and I don’t want to put my family at risk.”

With more residents becoming used to online shopping, the delivery station, which has 24 couriers, has been handling a rising number of items.

On Jan 2, it handled and delivered 3,600 packages, with several employees working until 11 pm.

This is the third time in the past 12 months that Li’s life has been disrupted by the pandemic.

He was planning to take his daughter to learn skiing during the Spring Festival holiday last year, but these plans were halted when the outbreak emerged. 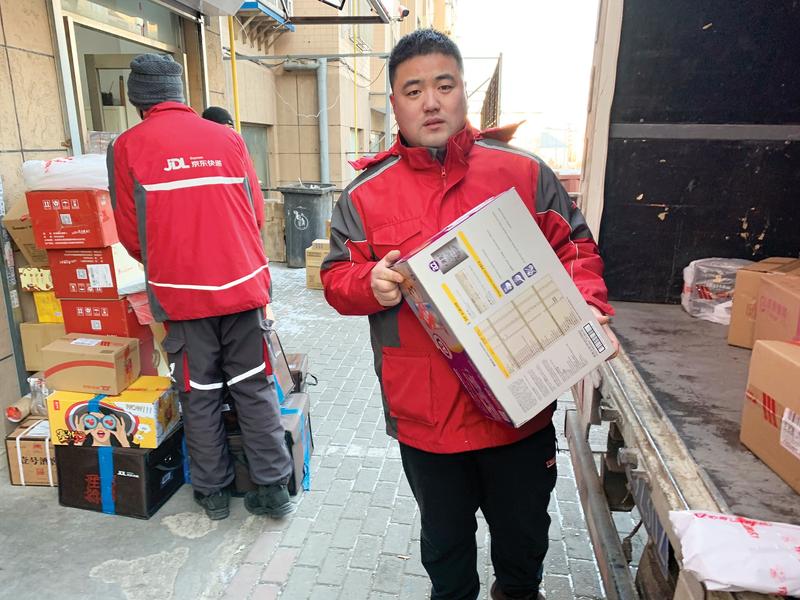 Li Wei, 31, who works at a JD Logistics delivery station in Dalian, Liaoning province, has been separated from his daughter for more than a month. (PHOTO PROVIDED TO CHINA DAILY)

After months of hard work, he was looking forward to spending more time with his family, but a new confirmed case of COVID-19 was reported in Dalian on July 22.

Aware that the district government was looking for service providers to transport epidemic prevention and control materials to a medium-risk area, Li reported to the company and was given approval to dispatch a van and a driver for this work.

He said that during the next month, staff members worked day and night to guarantee on-time delivery of epidemic prevention and control materials.

One day in late July, several couriers worked late into the night to unload materials, including more than 2,000 suits of protective clothing.

“I was very impressed that everyone at the temporary loading and unloading point — civil servants, community workers and volunteers — gave us a hand,” Li said.

In the following days, people from various backgrounds also helped one another, with some becoming friends through WeChat.

“During that time, the bonds between myself and my colleagues deepened,” Li said, adding that some who were still commuting between home and work always shared food they had prepared with those who stayed in the office.

“With the rapid development of China’s express delivery industry, I anticipate a better future for my family,” Li said.

“I hope the pandemic can end soon so that I can take my daughter to learn skiing during Spring Festival next month.” 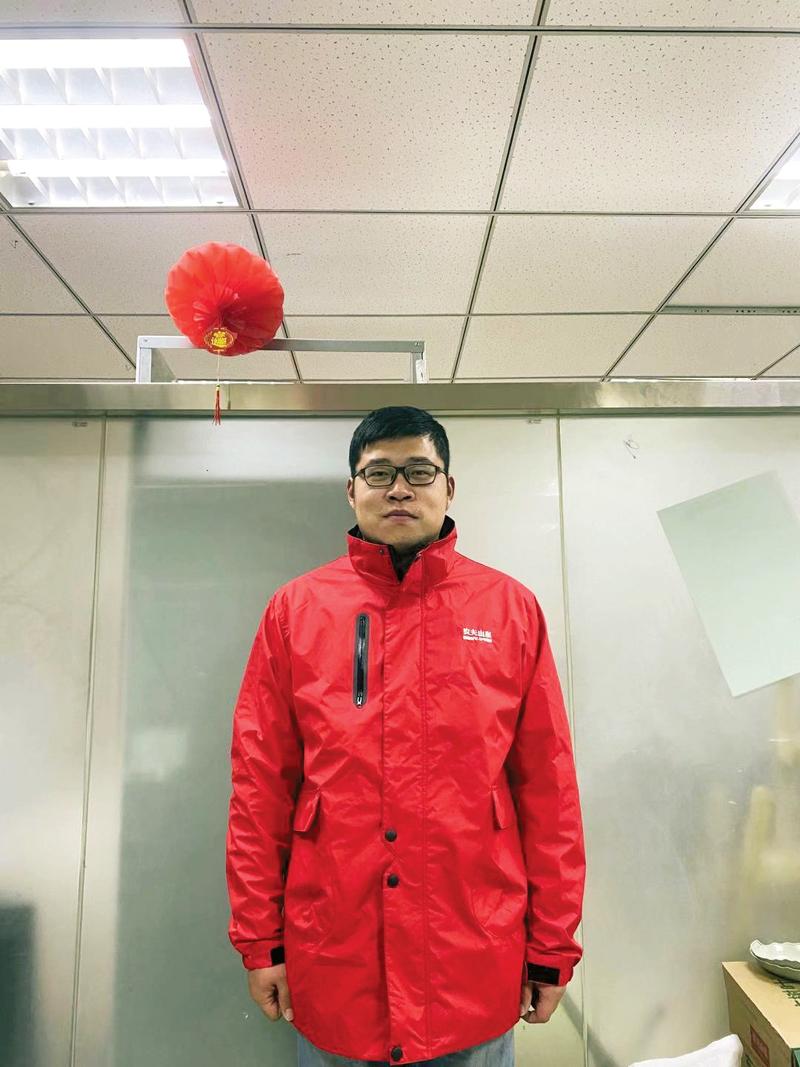 Wang Xujin, who works for water firm Nongfu Spring in Nanjing, Jiangsu province, overcame depression with the help of his family. (PHOTO PROVIDED TO CHINA DAILY)

Wang Xujin, a delivery worker in his 30s, works for the water company Nongfu Spring in Nanjing, Jiangsu province.

Recalling the past year, he said: “I once felt lost and was almost on the verge of giving up. However, my daughter, my wife and the public benefit activities I was involved in helped me get my life back in order.”

Wang began to feel pressure from COVID-19 at the beginning of last year.

“As I delivered water to shops and supermarkets across the city, last January, I noticed that fewer people were going out and some were beginning to wear face masks,” he said.

“One day, I visited eight pharmacies to buy masks, but they had sold out days before. As the breadwinner for my family and the father of a young daughter, I had to go out to earn money, but I worried every minute that I would bring the virus home with me.”

Wang’s work was affected significantly by the pandemic, with his salary being reduced by 60 percent from January to May. However, his family’s monthly expenses rose because he needed to pay for his daughter’s online classes. She is a student in the first grade.

“Lessons at her school were suspended to contain the virus and many students attended online classes. Some of these cost about 10,000 yuan each for a semester,” he said.

“I had to pay for several online classes to help my daughter keep up with her peers. My wife was laid off by the foreign trade company she worked for. My grandmother was living alone and I had to visit her frequently to buy food and do household chores.

“I suddenly realized that people were relying on me and I had a responsibility for them. I fell under great pressure and became depressed.”

For several days, Wang was reluctant to go to work and ignored everyone around him. He just wanted to sleep all day long.

However, every evening when he returned home, he saw his daughter concentrating hard on her online lessons in front of her laptop and his wife cleaning the apartment and putting food on the table. The cozy atmosphere comforted Wang and helped him through a difficult time.

“In February, the company started to offer free bottled water to volunteers, medical workers and police officers who contributed to containing COVID-19,” he said.

“I met so many people dedicated to assisting others. I was moved by what I saw and decided to try my best to lend a helping hand.”

He said his daughter complimented him after learning that he was delivering water to those helping to fight the virus.

“She said I was a hero. I felt so proud of myself after hearing her comment. Now, if I have time, I attend every public benefit activity,” Wang said.

Since May, with his wife looking for a new job, his daughter doing well at school and his salary rising, Wang said his life had returned to normal and the family had become more united.

He added: “Don’t give up, even in the hardest times. Once you overcome the challenges, your life will return to normal and you’ll embrace new hope.” 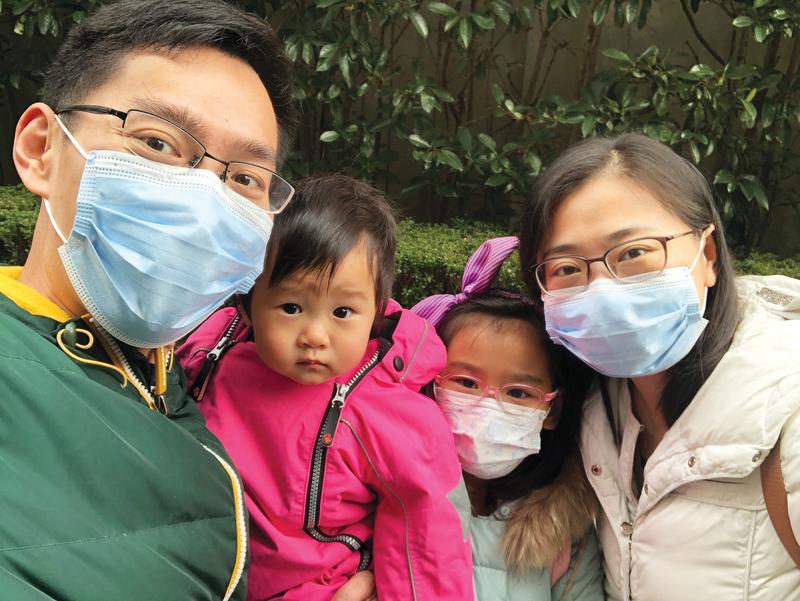 Better futures on the horizon

Xin Wen’s second daughter was born in February, at the peak of the outbreak in China. His first was born in 2013, when air pollution in Shanghai reached its peak.

At that time, the family thought about leaving the city, but the air quality has improved in recent years.

“During this special year, I always believed that once again we would get through the difficult times. The future will be better for sure,” said Xin, 36, an information technology engineer in the Shanghai office of a foreign enterprise.

Family gatherings were planned for the birth of his second child, but they had to be canceled due to the pandemic. Instead, the baby received numerous online greetings.

Xin and his wife decided to move into a bigger apartment after the birth, because their elder child needed to take online classes at home. The couple now has monthly mortgage commitments of more than 10,000 yuan.

In November, Xin was involved in an accident while riding a shared bike on his way home from work. He was thrown from the bike, injuring his jaw and mouth. “The moment I hit the ground, I felt teeth chips in my mouth,” he said.

He was confined to bed and was only able to consume porridge through a straw for several weeks. He now faces follow-up treatment on at least seven teeth.

However, Xin said such an incident is a trivial matter when compared with the numerous stories about life and death throughout the year at home and abroad.

“What I have learned from this accident is that we must live each day to the full and be kind to those around us,” he said.

He described a touching moment when his elder daughter left him a piece of fish to eat and told him it was tender enough for him to swallow.

“That was something that I had never expected from her,” he said. 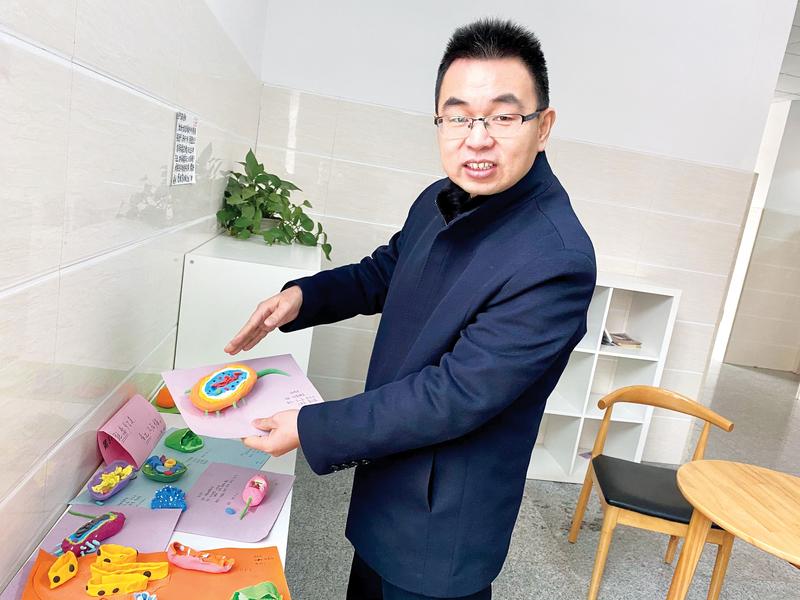 Birth of a new teaching model

Wang Xueyong, 41, a biology teacher at Jinan University Town Experimental Senior High School in Shandong province, had to embrace online lessons for his students, who studied from home in the first half of last year due to the pandemic.

With his wife pregnant at the time, Wang said: “This was a big challenge for us. Cultivating a new model of online teaching is kind of like conceiving a baby, hoping for a perfect birth and trying your best to take good care of it. However, the journey is bumpy.”

One of his tasks was to record an online lecture for second grade students at the school.

“I had no students to interact with, so I had to change my style,” said Wang, who has been a teacher for 17 years.

“I gave most thought to ways to involve students in the lecture,” he said, adding that he changed the syllabus several times and practiced repeatedly to ensure he made no mistakes.

While Wang was preparing for the lecture, he was told his wife might need a caesarean section. She checked in at the hospital early, with Wang taking his work to the ward.

He worked until late at night every day in the ward, hoping to complete preparations for the lecture as soon as possible in order to concentrate fully on looking after his wife.

“My wife had a natural birth for our first child, but had been nervous when told she might need a caesarean section,” Wang said.

After his wife was sent to the delivery room, he started to tackle problems he encountered in trying to upload the lecture.

“Finally, there was good news. Minutes after I solved the problems and uploaded the lecture, my wife gave birth to our daughter,” he said.

Wang gave the newborn the nickname Nuannuan, which means “warm”.

“Amid the pandemic, there have been many warm stories across China, and I hope my daughter can live in a world full of warmth,” he said.

With the belief that actions speak louder than words, Wang has been doing his best to remain positive for his students.

One of them, Han Xiaoxi, said: “He exemplifies the Chinese saying ‘inner peace is needed when you encounter a big event’. He also helps us remain calm.

“One of my classmates is a little impulsive. Teacher Wang let him water the plants regularly in our classroom for at least a month to help the student keep his temper. I think this is a good way of dealing with the problem.”

Guo Jun in Nanjing contributed to this story.