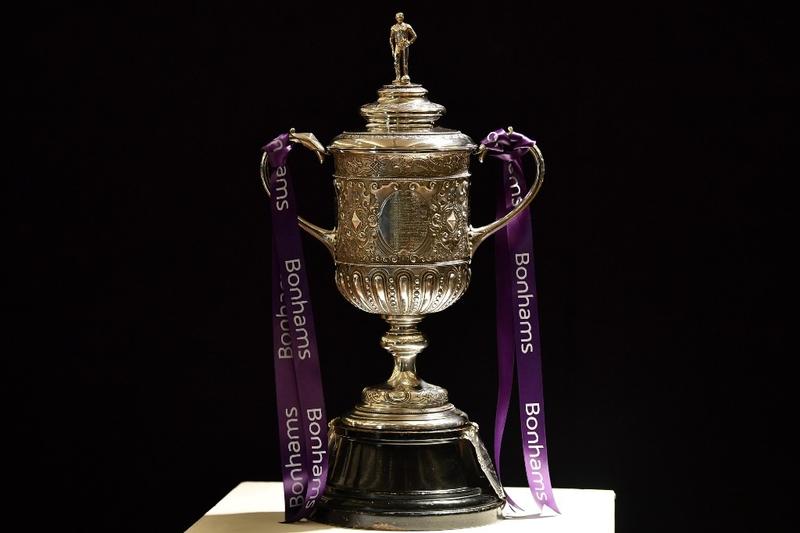 The oldest surviving FA Cup trophy, awarded between the years of 1896 and 1910 to the yearly winner of the English FA Cup final match, is pictured during a photocall at Bonhams auction house in London on Sept 7, 2020. (GLYN KIRK / AFP)

Manchester City owner Sheikh Mansour bin Zayed Al Nahyan is the new owner of the oldest existing version of the FA Cup trophy, having purchased the silverware at a recent auction, the Premier League club said on Friday.

The Football Association Challenge Cup trophy, a forerunner of the FA Cup in use today, was presented to winning teams from 1896 to 1910, when the original was stolen from a shop in Birmingham after Aston Villa won the title.

It was the first trophy Manchester City won over a century ago by beating Bolton Wanderers 1-0 in the 1904 final, making them the first professional soccer club from Manchester to capture a major honor

It was the first trophy Manchester City won over a century ago by beating Bolton Wanderers 1-0 in the 1904 final, making them the first professional soccer club from Manchester to capture a major honor.

“This cup is a visible reminder of the rich and long history of English football to which City is inextricably entwined,” Manchester City chairman Khaldoon Al Mubarak said in a statement.

“Winning this actual trophy in 1904 was a turning point for the club and for the city of Manchester in that it firmly cemented football in the heart of its community.

“Sheikh Mansour’s view is that a trophy of such cultural significance must be shared with the people of Manchester, the English football family, and those who love the English game.”

West Ham United co-owner David Gold, the previous owner of the trophy, sold it for 760,000 pounds (US$1.03 million) at an auction in September 2020 with the winning bidder remaining anonymous.

Gold had bought the trophy in 2005 for 478,000 pounds during his time as chairman of Birmingham City.

Manchester City said the trophy has been offered on loan to the National Football Museum in Manchester, where it has been housed since 2005.