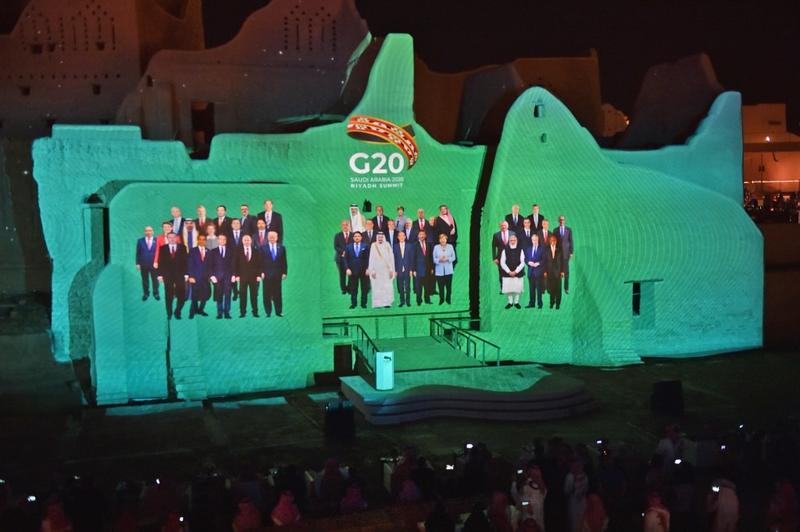 A family photo of G20 Leaders is projected at the historic site of al-Tarif in Diriyah district, on the outskirts of Saudi capital Riyadh, ahead of G20 virtual summit on Nov 20, 2020. (FAYEZ NURELDINE / AFP)

RIO DE JANEIRO / SANTIAGO / ZAGREB / PARIS / BERLIN / MEXICO CITY / RABAT / LONDON / NEW YORK / BRUSSELS - Leaders of the 20 biggest world economies (G20) will debate this weekend how to deal with the unprecedented COVID-19 pandemic that has caused a global recession and how to manage the recovery once the coronavirus is under control.

High on the agenda are purchases and global distribution of vaccines, drugs and tests for low income countries that cannot afford such expenses themselves. The European Union will urge the G20 on Saturday to invest US$4.5 billion to help.

While the global economy is recovering from the depths of the crisis earlier this year, momentum is slowing in countries with resurging infection rates, the recovery is uneven and the pandemic is likely to leave deep scars, the International Monetary Fund said in a report for the G20 summit.

Pfizer Inc and BioNTech SE requested emergency authorization of their COVID-19 vaccine on Friday, and it could take at least three weeks for a US Food and Drug Administration decision as trial data is probed by agency staff and outside advisers.

Shown to be 95 percent effective and without any major safety issues, their vaccine could be the first to be cleared for use, but first it must undergo a thorough vetting. The filing could enable its use by the middle to the end of December, the companies said in a statement.

A key step along the way is a meeting of outside FDA advisers, all experts in infectious diseases and vaccines. The FDA will convene the advisory group Dec 10 to discuss Pfizer and BioNTech’s vaccine, according to a statement from the agency Friday. The FDA will spend the few short weeks between the emergency authorization request and the meeting sorting through the trial data. 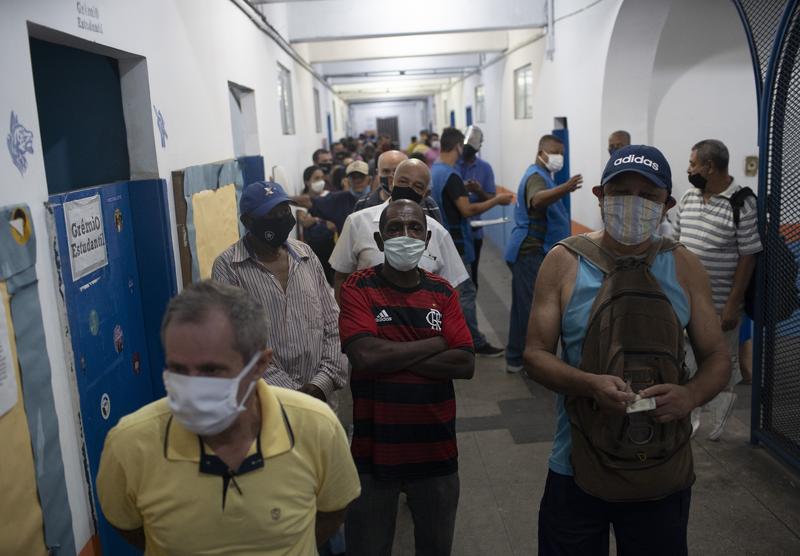 People wait in line to vote in municipal elections at a polling station at the Rocinha slum of Rio de Janeiro, Brazil, Nov 15, 2020. (SILVIA IZQUIERDO / AP)

Brazil surpassed 6 million confirmed cases of COVID-19 on Friday, the health ministry said, as the world’s third-worst coronavirus outbreak begins to surge again amid fears that a second wave is underway.

The South American nation joined the United States and India as the only countries to have passed the 6 million mark. With almost 170,000 confirmed fatalities, Brazil has the world’s second highest death toll.

Canada’s largest province ordered a lockdown in Toronto and one of its suburbs, a declaration that forces shopping malls, restaurants and other businesses to close their doors to slow a second wave of coronavirus cases.

Ontario, home to 14.7 million of the country’s 38 million people, said all non-essential retail stores in Toronto and Peel will have to close, though they can take orders for outdoor pickup and delivery. Restaurants will be allowed to operate takeout and delivery services only. Personal services such as salons will also shut down and indoor gatherings will be largely banned. The measures take effect Monday.

ALSO READ: EU says no change to uses of remdesivir after WHO guidance

He said that in recent days the Magallanes region, in the extreme south of the country, continued to have the highest rate of cases per 100,000 inhabitants.

In light of the 3,000-odd daily coronavirus infections and 40-plus deaths in the last few days, the authorities said that the measures taken so far had not been sufficient to ensure that the health care system can sustain its pandemic response.

The new restrictions limit the size of outdoor gatherings to a maximum of 25 people. Weddings cannot be attended by more than 15 people and private gatherings by 10 people. All night-clubs will have to remain closed, while bars and restaurants can stay open until 10 p.m. only. The sale of alcoholic beverages is forbidden after 10 p.m.

There have been 2,958 new COVID-19 cases in Croatia in the past 24 hours, the country's Institute of Public Health said on Friday. Almost 30 percent of those tested got positive results.

France's total COVID-19 cases have reached 2,109,170, and deaths at 48,265, while the number of hospitalizations continued to decline, data released by health authorities showed on Friday.

In a 24-hour span, 22,882 new infections were reported, up from 21,150 registered on Thursday. An additional 1,138 patients have succumbed to COVID-19, including 757 deaths registered in nursing homes which are counted twice a week, on Tuesdays and Fridays. 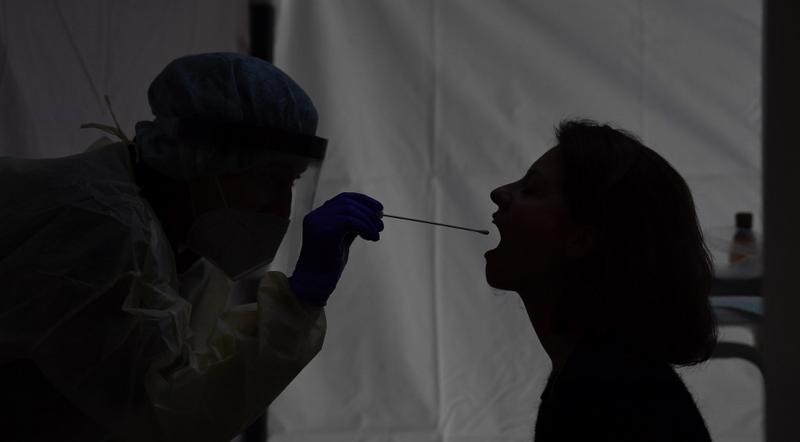 Germany's Robert Koch Institute (RKI) for disease control on Friday reported a new daily record of 23,648 new COVID-19 infections, bringing the country's tally to 879,564 since the beginning of the pandemic.

The COVID-19 situation in Germany remains "serious, very serious," said RKI President Lothar Wieler at a press conference on Thursday. Although the country has been in a partial lockdown since Nov. 2, case numbers are "still very high overall, much too high."

The real number of cases is likely significantly higher than the official tally, according to the ministry.

Britain's reproduction number, also known as R number, for COVID-19 has decreased to a maximum of 1.1 from a maximum of 1.2, Sky News reported on Friday.

The R number is the average number of secondary infections produced by a single infected person.

The current R number is estimated to be between 1.0 and 1.1, Sky news said, adding that the number has been confirmed by the Scientific Advisory Group for Emergencies (SAGE), which advises the British government on its response to the pandemic.

An R number between 1.0 and 1.1 means that on average every 10 people infected will infect between 10 and 11 other people, according to a guidance published by the British government.

If the R number is above one, it means the number of cases will increase exponentially.

Another 20,252 people in Britain have tested positive for COVID-19, bringing the total number of coronavirus cases in the country to 1,473,508, according to official figures released Friday.

The coronavirus-related deaths in Britain rose by 511 to 54,286, the data showed. 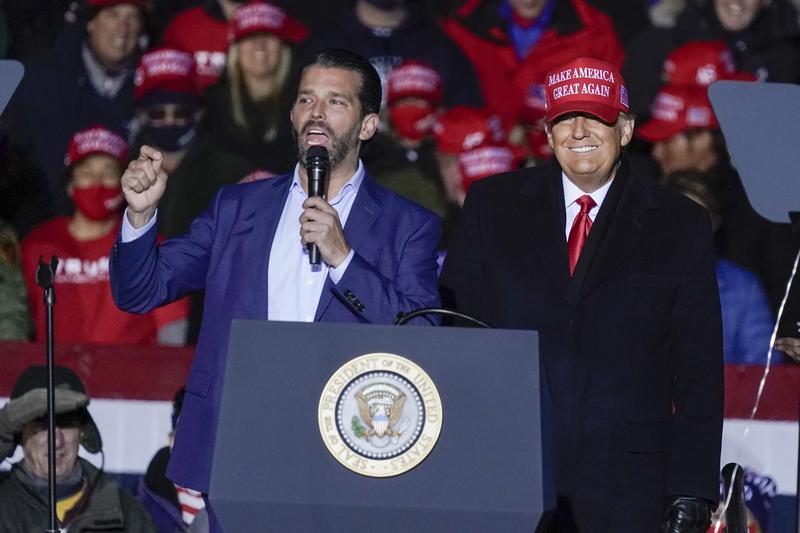 In this Nov 2, 2020 photo, US President Donald Trump watches as Donald Trump Jr speaks at a campaign event at the Kenosha Regional Airport in Kenosha, Wisconsin in the US. (MORRY GASH / AP)

Donald Trump Jr, the son of US President Donald Trump, tested positive for COVID-19 this week, although he is experiencing no symptoms, according to his spokesman.

Trump Jr tested positive at the start of the week and has been “quarantining at his cabin since the result,” the spokesman said.

“He’s been completely asymptomatic so far and is following all medically recommended COVID-19 guidelines,” he said.

Andrew Giuliani, the son of the president’s personal lawyer Rudy Giuliani, also said he tested positive for COVID-19 on Friday.

The mayor said at his press conference on Thursday that new COVID-19 restrictions are likely to hit the city in the coming days.