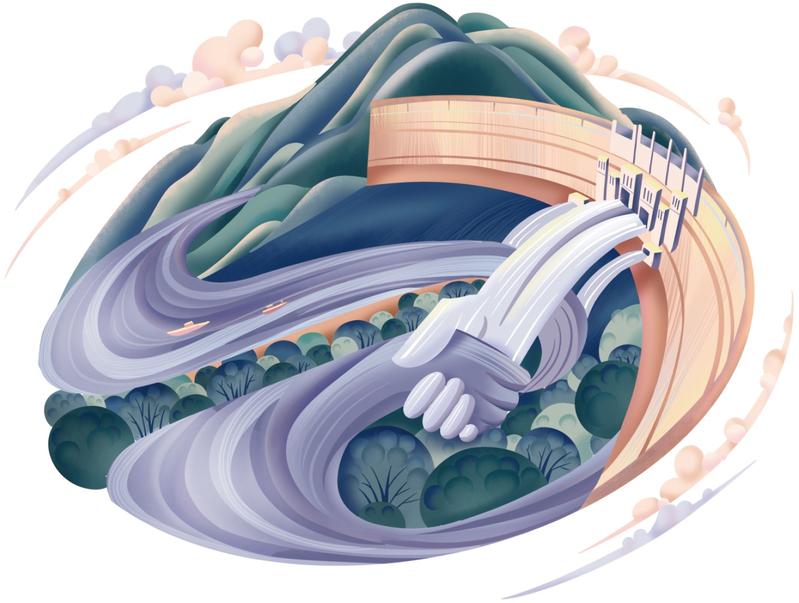 The drought that hit the Lancang-Mekong River basin in 2019 caused the water in this great river to drop to one of its lowest levels in more than 100 years, inflicting substantial damage on both upstream and downstream communities.

The unprecedented low level of the water in the river attracted much attention from Lancang-Mekong riparian countries (China, Myanmar, Laos, Thailand, Cambodia and Vietnam) and beyond, including a study by researchers from Eyes on Earth and Global Environmental Satellite Applications (EoE) that said the drought was caused because China's dams upstream withheld water. But a subsequent commentary by the Mekong River Commission raised serious doubts about the data and methodology used by the EoE study.

The MRC report concluded that the 2019 drought was due largely to insufficient rainfall during the wet season and early departure of the rains, as well as an El Nino event that created an abnormally high temperature and high evapotranspiration. It also said it's not true that the acute shortage of water in the lower basin of the Mekong River, called Lancang in China, in 2019-20 was due to China's dams withholding water.

Fostered by the MRC report, we conducted a study aimed at further quantifying the drought's characteristics in the Lancang-Mekong River basin and the possible role of reservoir regulation.

The resultant report was openly shared and peer-reviewed in an online webinar held in July, which attracted renowned scholars from Oxford University, University of Illinois at Urbana-Champaign, Mekong River Commission, Chulalongkorn University, Hydropower & Dams International and the Southern Institute of Water Resources Research of Vietnam, and other experts from the six Lancang-Mekong countries.

The international experts concluded that our study had accurately analyzed the drought characteristics of the Lancang-Mekong River basin, causes of the 2019 drought and the regional composition of runoff along the Mekong River by using state-of-the-art models, methods and comprehensive datasets. The experts also said our report illustrated the mitigation effect of upstream reservoirs on the drought as a whole.

From his published papers, we know the lead author of the EoE research report developed the wetness index in the name of Basist Wetness Index, and mentioned in his papers that this index is not applicable to highly vegetated mountainous areas.

Yet the Lancang River basin is a highly vegetated mountainous area. Which means the EOE study was at best inaccurate and worst based on the wrong premise.

In the Bangkok Post article, the EoE authors came up with a new issue of flood. They emphasized the absolute advantage of flood pulse to the livelihoods of the people in the downstream of the river that depend on it, that is, the Tonle Sap fishing industry, by claiming that "there have been zero cases of severe flooding which killed thousands of people, let alone millions".

Yet the fact is that floods caused many fatalities and economic losses in the six Lancang-Mekong countries. Hundreds of lives were lost as major floods ravaged the Mekong basin during 2000-14 with the overall death toll being more than 2,000－which could have been minimized largely due to effective flood control infrastructure.

As researchers we have participated in many cooperative activities associated with the Lancang-Mekong River during the past more than 10 years. We have witnessed that the Lancang-Mekong riparian countries are engaged in high-level water resources cooperation under the MRC and Lancang Mekong Cooperation Mechanisms. To the best of our knowledge, the key to cross-border water resources management is collective action. And in the words of Elinor Ostrom, the 2009 Nobel Prize winner for Economics, building knowledge and trust are essential for solving collective-action problems.

The experiences of the 2019 drought and all previous droughts call for more collaborative actions by the multiple stakeholders to alleviate drought and other extreme hydrological hazards. Which is not easy. Yet knowledge sharing, underpinned by solid scientific understanding, could be the first step in that direction.

To conclude, we would like to share the main findings of our study with the aim of building knowledge and trust. The Lancang-Mekong River basin is experiencing frequent droughts－significantly more droughts in the dry season than in the wet season. The 2019 drought was among the most severe in the past century, and the worst hit area was the Lancang to upper Mekong area (NongKhai).

Since the severe drought in 2019 was characterized by less precipitation since the early wet season, the regulation of reservoirs in the Lancang-Mekong River basin could play an active role in dealing with droughts in the basin. We hope all the riparian countries make serious joint efforts to face the common challenge and build a better future for all.