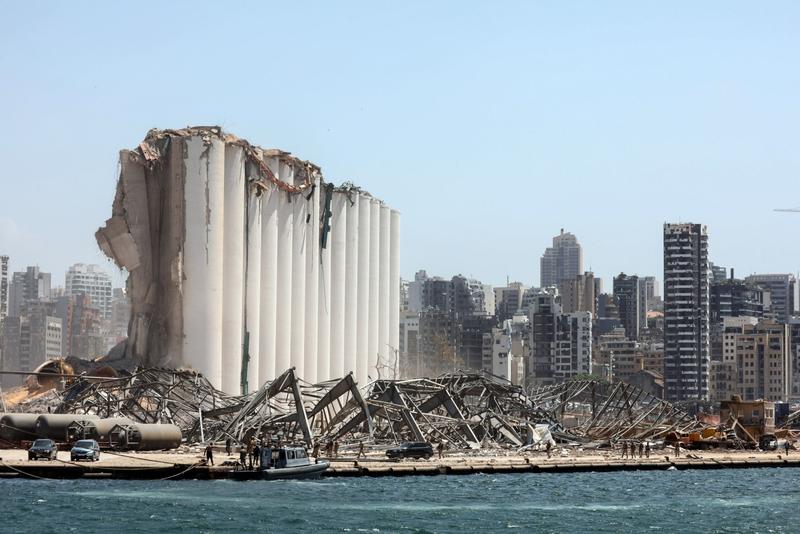 Damaged grain silos from the blast at the Port of Beirut, Aug 8, 2020. (PHOTO / BLOOMBERG)

World leaders pledged almost US$300 million to help support Lebanon and rebuild Beirut after the deadly blasts last week that destroyed a huge swath of the city.

Leaders from more than two dozen countries participated in a virtual donors’ conference Sunday co-hosted by French President Emmanuel Macron and the United Nations. The participants pledged to bring together “major resources” in the coming weeks to address the needs of Beirut and the Lebanese people, according to a final statement.

The participants pledged to bring together “major resources” in the coming weeks to address the needs of Beirut and the Lebanese people, according to a final statement

“In these horrendous times, Lebanon is not alone,” the participants said in the statement.

The leaders pledged a total amount of 252.7 million euros (US$298 million) for emergency relief, according to Macron’s office, including 30 million euros from France.

His office said the money is immediate relief to go directly to Lebanese people and aid groups. Later assistance would be contingent on political reform.

Pledges include US$20 million from Germany and US$41 million from Kuwait. The European Commission is offering 63 million euros and Qatar is putting up US$50 million, Lebanese TV network Al Jadeed reported. Cyprus also pledged 5 million euros, the Lebanese presidency said.

“The participants agreed that their assistance should be timely, sufficient and consistent with the needs of the Lebanese people, well-coordinated under the leadership of the United Nations, and directly delivered to the Lebanese population, with utmost efficiency and transparency,” according to the statement.

As the residents of Beirut try to pick up their lives after an explosion that shook the country to its core, they are doing so with their surroundings utterly transformed.

Curtains flutter through broken windows, piles of debris block the streets and top-floor apartments with their roofs blown off are exposed to the sky.

Asked about the unfortunate blast, Iran said on Monday that countries should refrain from politicising the massive blast in Beirut last week, and that the United States should lift sanctions against Lebanon.

“The blast should not be used as an excuse for political aims ... the cause of the blast should be investigated carefully,” Foreign Ministry spokesman Abbas Mousavi told a televised news conference.

Outrage over the Aug 4 explosion is running high in Lebanon, with protesters taking to the streets to demand regime change and the resignation of the government of Prime Minister Hassan Diab. The tragedy has accelerated the political and economic crisis that has crippled the country.

Pledges include US$20 million from Germany and US$41 million from Kuwait. The European Commission is offering 63 million euros and Qatar is putting up US$50 million

The blast, caused by an explosion of chemicals stored at the city’s main port, killed more than 150 people, injured 6,000 and left hundreds of thousands homeless. Protests against the government’s role in the devastating blasts turned deadly on Saturday, contributing to the resignation of two Lebanese cabinet ministers.

Information Minister Manal Abdel Samad submitted her resignation “in response to the public calls for change,” she said in a televised press conference on Sunday. Environment Minister Damianos Kattar also resigned on Sunday, according to Tele-Liban state television. Seven lawmakers have resigned since last week.

Macron said he wants to help the Lebanese people without endorsing the political class that led the country -- once under a French mandate -- into financial meltdown through decades of corruption and mismanagement.

“The Lebanese authorities must now implement the political and economic reforms demanded by the Lebanese people and which will enable the international community to act effectively alongside Lebanon in the reconstruction process,” Macron said.

Lebanon has arrested 20 people since the blast, which was caused by 2,750 tons of explosive materials left for six years at the country’s main port despite repeated safety warnings. Most of those arrested were port officials and protesters continue to demand accountability at the highest levels.

Three decades after the end of the of a 15-year civil war, the country remains divided along sectarian lines. The government, backed by the pro-Iranian militant Hezbollah group and its allies, has struggled to carry out reforms demanded by the international community as the price for a financial bailout. Former Foreign Minister Nassif Hitti, who resigned just prior to the explosion, warned the country was at risk of becoming “a failed state.”

The International Monetary Fund said on Sunday that it has engaged “intensely” with the Lebanese authorities on a reform package aimed at addressing the deepening crisis, but the discussions “have yet to yield results.”

With inputs from Reuters